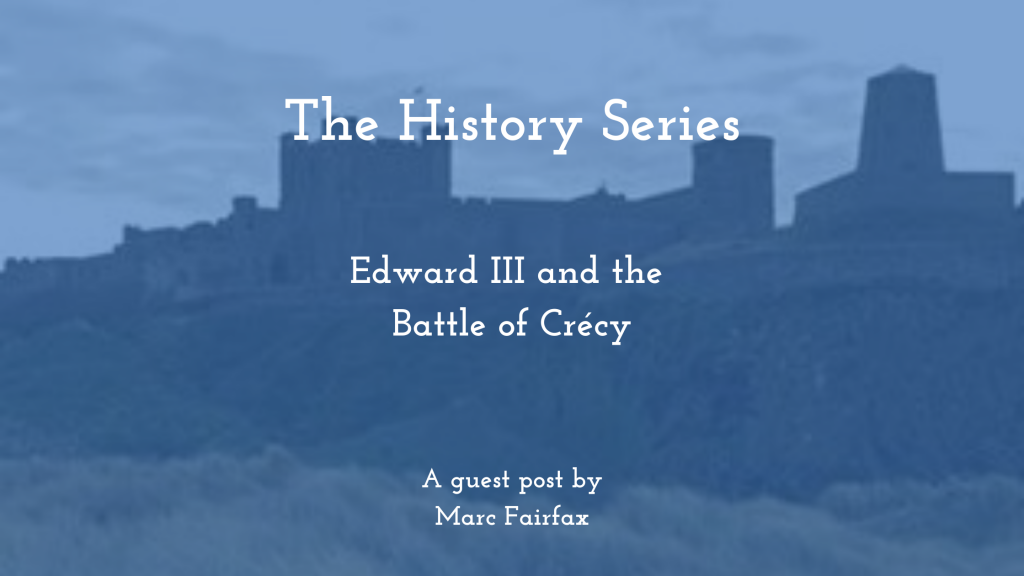 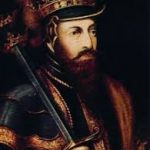 Lasting from 1337 until 1453, England and France were the main protagonists during a series of conflicts we refer to as the Hundred Years War. The ‘war’ was significant in shaping the national character of both nations and its effects resonated all over medieval Europe. One of the most important encounters was the battle of Crécy, a French village 55km north of Amiens, where an invading English force clashed with a much larger army of France.

On 12th July 1346, Edward III of England landed in Saint-Vaast-la-Hougue, just to the east of Cherbourg, with an army of around 7,000 to 10,000 men. Having been informed that the French were anticipating their arrival in Gascony, in the south-west, Edward smartly chose to land on the north coast instead. The King of France, Philip VI, had indeed committed forces to the south-west to face the threat, meaning the English faced no opposition when they arrived at the northern beach.

The English looted and pillaged their way to within three miles of Paris, where Philip was urgently attempting to summon a countering army. The English then marched north-east, pursued by the French, who had responded to Philip’s call to muster in Rouen. On 26th August, after reaching an elevated area near the village of Crécy, Edward readied his army to face the French assault.

The Disputed Throne of France

The motivations behind Edward’s actions can be traced back almost 300 years; a long and complex web of cross-channel political wrangling stretching back as far as the Norman Conquest of 1066. For now, we’ll settle for the simplest explanation: Edward had claimed the throne of France as his own.

When King Charles IV of France died in 1328, at the age of 33, he left no male heir. According to the French laws of

succession, the monarch had to be male, meaning that Charles’ younger sister, Isabella, could not inherit the crown. Consequently, the throne went to Charles’ cousin, Philip of Valois, who ruled as Philip VI (or Philip the Fortunate).

Isabella, who was also the widow of King Edward II of England, saw things differently. Effectively acting as regent for her son, the 15-year-old Edward III, she argued that it may be true that a woman cannot become monarch, but it is not the case that the royal lineage cannot not be passed on through a woman.

Therefore, as the oldest male directly from the lineage of Charles’ father, Philip the Fair, she claimed that her son Edward was the rightful king of France as well as England. The idea wasn’t taken very seriously in France at the time, but Edward pressed his claim to the throne in 1337. The catalyst was Philip’s confiscation of Aquitaine, a French vassalage which had been governed by the English, an act which brought about the struggle for the throne and for power.

The first years of the conflict were mostly confined to the Breton War of Succession, where the French Charles de Blois and the English John de Montfort fought over control of the French Duchy of Brittany. When de Montfort died in 1345, Edward III was able to look further afield for his 1346 summer campaign. 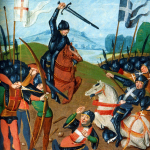 In the absence of any friendly port towns in the north of France, he opted to sail for the beach at Saint-Vaast-la-Hougue where the troops were able to disembark safely, and set forth on a march of destruction through Normandy, before meeting the French army in Crécy.

The English army was set up in three divisions; two to the front and one to the rear. The largest forward unit, to the right, was commanded by Edward III’s son, also Edward, Prince of Wales and commonly known as The Black Prince.

The left division was commanded by the Earls of Northampton and Suffolk. Both divisions were fronted by men-at-arms, with spearmen to the rear and longbowmen on the flanks. The division to the rear was commanded by King Edward himself. The French numbers are unclear, but it seems likely that they outnumbered their opponents by roughly two to one, fielding men-at-arms, cavalry, crossbowmen and general infantry.

The French Defendants of Crécy

14th century France was unlike the homogenous state we know today, or even as united a nation as contemporary England. Although some of the country was ruled directly by the crown, much was divided into fiefdoms, ruled by nobles who paid homage to the king, and who had varying degrees of autonomy over their territories depending on the politics of the day.

These nobles had been called by Philip to raise men and join the fight – the Counts of Alençon, Blois and Flanders joined their monarch in taking command of troops. Philip had also gathered allies from further afield, including King John of Bohemia and James III, the deposed king of Majorca.

The French approached the English position at around midday and Philip sent scouts to assess the situation. He and 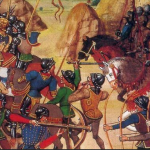 his war council agreed that the best course of action was to camp overnight and march upon the English the following day, allowing the army to rest after their long morning march and giving reinforcements, who were en-route, a chance to arrive time for the battle.

For reasons unknown, the plan soon changed. Perhaps it was a strategic decision, or it may have been bravado on the part of the collected nobles, all wishing to prove their mettle while together in the presence of the king.

It could even have been pressure from the many angry peasants who’d tagged along wanting to see the English slain in revenge for the trail of destruction they’d left behind. Whatever the reason, the decision was taken to attack that afternoon.

Weapons in the Battle of Crécy

At around 4pm, the vanguard of the French army, the mercenary Genoese crossbowmen, began advancing upon their opponents. The Genoese were a crack unit and one of the most highly respected armies of the day. Although not a new weapon by any means, the crossbow had enjoyed something of a resurgence in popularity in medieval Europe and these men were masters of their craft. 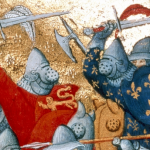 The crossbow was, arguably, a prototype gun. Gunpowder weapons were still in their infancy (and the English did field some primitive cannon units at Crécy) but it shares the principles of a gun; specifically, that ammunition is loaded into a hand-held weapon, pointed at the enemy and then triggered by a finger action. The crossbow was an important medieval weapon of war and the Genoese were the cream of the crop, but this was to be their worst day.

As the mercenary contingent, possibly about 5,000 in number, advanced towards the enemy, a heavy downpour began. Legend has it that the heavy rain slackened the strings on their crossbows, rendering them barely useable, while the English longbowmen simply detached their strings from their bows and kept them dry under their hats until it was time to start firing.

A lovely story but unverifiable and unlikely. Whilst we know that it rained and that the English longbowmen probably detached their strings until called into action, there is no reason to believe that the weather had any significant impact on the crossbows.

What is more likely is that the Genoese were heavily outgunned from the outset. If crossbows were prototype guns then longbows were prototype artillery, with a far superior range and rate of fire. The crossbowmen never stood a chance. The English longbowmen would have been firing arrows almost 300m, while their opponents’ crossbows would have fallen significantly shorter than 200m.

The mechanics of the crossbow meant that reloading was a cumbersome process. The deluge of arrows that fell upon the Genoese, described in contemporary reports as being like falling snow, were fired by each longbowman roughly once every five seconds. The advancing crossbowmen would have been lucky to fire their weapons twice a minute.

As if things weren’t bad enough for the mercenary vanguard, the decision not to camp overnight meant that they had to advance without their shields, used for protection when reloading, as they were in one of the rear wagons that had yet to reach the French base.

Facing heavy losses and suffering under a torrent of arrows, they soon decided to retreat. What better excuse for an

elite unit that had been easily routed than to say that their weapons were not firing properly because of the weather?

As the overwhelmed soldiers ran from the field, the cavalry units led by the Count of Alençon and King John of Bohemia were moving towards them. The advance of King John was particularly remarkable, as he had completely lost his eyesight some ten years earlier. He entered the battle atop his own steed, which was attached on either side to two nobles on horseback.

Riding uphill, the French charge was impeded by the fleeing crossbowmen, heavy mud and the pits dug by the English to solidify their position. Assuming cowardice on the part of the retreating Genoese, the advancing horsemen taunted them and ran them over.

Both cavalry units had suffered heavy losses by the time they reached the English lines, unarmoured men and horses succumbing to the sustained longbow fire. The English infantry held tight, despatching their enemies mercilessly. Loose and injured horses were strewn across the battlefield.

More French cavalry joined the assault, racing into the muddy chaos of flying arrows, and a rapidly increasing number of dead bodies and spooked horses. The French attacked in waves, each time attempting to break the English lines and each time being met with stubborn resistance, forcing repeated retreats.

Mêlées broke out across the front line where the French assailants were slaughtered all too easily. During a rare period where the French looked as if they had gained an advantage, the Black Prince called for reinforcements.

Confident that his son could handle the situation, despite apparently being in some danger, King Edward sent men to assist but personally remained with the rear division. “Let the boy win his spurs.” he is reported to have said. With the arrival of the fresh troops from the rear, the French were beaten back once again.

The assault upon the English continued well past sundown. The battlefield was strewn with French corpses and the attackers’ hopes grew increasingly futile. Close to midnight, Philip eventually decided it was time to call it a day and called the retreat from the battlefield. He’d lost two horses from underneath him and had been wounded by an arrow to the jaw.

It was a catastrophic defeat for the French army. The records show that over 1,500 French nobles were killed and the total number of French casualties, although difficult to accurately estimate, is unlikely to have been less than 10,000. The fallen included two kings, nine princes, ten counts, a duke, an archbishop and a bishop. The total English casualties were probably fewer than 300.

The deposed James III was amongst the dead, as were the Counts of Alençon and Blois. John the Blind of Bohemia, perhaps unsurprisingly, had been killed by early evening. The English are said to have captured and displayed so many French standards that nearby residents gathered at Crécy, believing that the French had won, and were duly slaughtered. 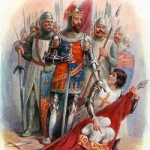 The Black Prince is also thought to have found King John’s standard on the ground when surveying the field after the battle. The standard’s three white feathers emblem, atop the motto Ich Dien (meaning I serve), was adopted by the prince and survives to this day in the form of the Prince of Wales Feathers.

Victory at Crécy was a substantial gain for Edward. With the French routed, he was able to march upon Calais to take control of the city. The siege of Calais lasted for almost a year but when the defenders eventually conceded defeat, Edward had acquired the strategic advantage that came with control of a friendly port on the south side of the channel. England would retain control of Calais until 1558.