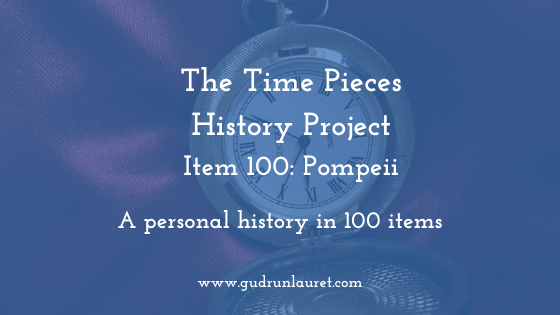 First time on the blog or new to the Time Pieces History Project? Find out what it’s all about here, and then come back to this page for today’s item – Pompeii.

My final place is somewhere that has been top of my list of must-see spots for more than two decades: Pompeii (and Herculaneum). In their late 50s, my grandparents started travelling a lot.

They went together to Egypt, and their photos of the pyramids definitely spurred my wanderlust. But it was the trip to Pompeii my grandma had with her older sister that really sparked my attention. That, combined with the ‘Rotten Romans’ book in the ‘Horrible Histories’ children’s series by Terry Deary (a local lad!) was probably what began my lifelong fascination with the Romans.

Robert Harris wrote a fictionalised account of the last days of Pompeii in his novel ‘Pompeii’, written from the point of view of an aqueduct engineer who survives. He brings in real-life people such as Pliny the Elder, and his nephew Pliny the Younger, who were both in the vicinity at the time. His vivid descriptions of those final few hours are chilling and gripping.

The History of Pompeii

While the ultimate fate of Pompeii is known to just about everybody, the town has a story, too. The area around the town’s location was occupied in Neolithic times, and the Greeks took charge of it in the 8th century BC. They were temporarily forced to relinquish control by the Etruscans in the following century, although they were able to claim it back when the Etruscan navy was destroyed. It was then captured by the Samnites, an Italic warrior tribe who warred with the Romans. 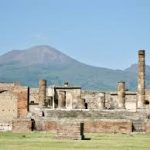 Contemporary writers and later historians recorded a wealth of information of what life was like in Pompeii, and the extensive archaeological works have also revealed a lot of detail of the everyday experiences of the unfortunate citizens.

Everybody’s lives were dictated by the sunrise and sunset, so days started early. The markets were bustling and slaves collected water from the many fountains dotted about. If you wanted to have a wash, you went to the public baths, unless you were wealthy enough to have water at home.

Entertainment was provided in the local amphitheatre, where you could watch gladiators fight to the death. Alternatively, you could host your own dinner party and have musicians and dancers, or just make the feast itself the focal point of the evening.

Pompeii was ideally situated on the seafront along the Bay of Naples, so many rich Romans had villas there, to which they retreated during the height of summer. Harris describes the town as full of opportunists, with former slaves building lavish bathhouses and many business owners looking to make some easy money.

An inscription on a tomb dating to before the eruption describes the coming-of-age party for one young man, who threw a party which included 416 gladiators performing for his more than 6,000 guests, who also enjoyed a birthday banquet. As life expectancy was around 35, it makes sense that they celebrated when they had the chance!

This inscription is particularly useful as it helps historians work out the population of Pompeii. The party would have only been attended by men of high rank, and if men made up about a quarter of the population, the total number of inhabitants would be around 30,000.

Because of its strategic location, Pompeii was also an important port and trading post, which also contributed to its wealth. Many of the preserved buildings reflect that, as they provide evidence of leisure pursuits enjoyed by both locals and visitors. Harris gives the impression of the townsfolk as consumed with their own pleasures and interests, oblivious to the warning signs (such as the earthquake which demolished many of the buildings 16 years before Vesuvius erupted).

The Destruction of Pompeii

There were some signs that Vesuvius was going to erupt, but it’s fair to say that the many people were taken by surprise. There had been mild tremors in the days leading up to the eruption, but locals were used to these, and paid little attention. Harris has his aquarius (aqueduct engineer) Atilius noticing the smell of sulphur coming from water pipes, suggesting something was amiss.

People fled along the coast from Pompeii, Herculaneum and Stabaie, but they couldn’t all outrun the poisonous gas, which killed about as many as the magma or the falling rocks. In total, the remains of around 1,500 people have been found to date.

The eruption lasted only two days, beginning with a pumice stone rain lasted for 18 hours – those that did escape got out in this window. The pyroclastic flows, which began in the early hours of the morning of 25 August AD79, was accompanied by hot ash clouds. The combination of these caused the most damage to the buildings, landscape and people – those who weren’t suffocated were crushed by falling debris.

Remains lay forgotten until they were rediscovered in 1748. The eerie scenes with citizens frozen where they fell, 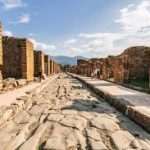 mothers reaching out to children and horses still attached to chariots are not the actual remains of the people.

The bodies of the unfortunate victims had rotted over the centuries, although bones sometimes still remained beneath the layer of ash. Italian archaeologist Giuseppe Fiorelli realised the significance of these discoveries, and injected plaster into the hollows to recreate the figures. Today, clear resin is used instead.

In recent years, there has been a suggestion that the eruption of Mount Vesuvius erupted later in 79 than previously thought. Evidence to support this includes the clothes worn by the deceased – heavy, warmer outfits than they would have needed in August. In the shops, fruit and vegetables on sale were autumnal, with the summer seasonal fruit in jars. It’s possible that the destruction of Pompeii happened in late October or even November.

We meet Gaius Plinius Secundus (more commonly known as Pliny the Elder) in Harris’ Pompeii novel when he’s in his 50s, corpulent and unhealthy, but still interested in the world around him. Having noticed small tremors shaking his wine, he sets his secretary to study and record them, so the information isn’t lost. 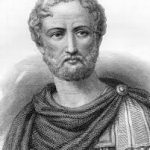 His career was surprisingly varied, especially for a wealthy, well-educated young man who probably didn’t need to work. After completing his studies, he joined the army and served as a cavalry commander.

He then went back to Rome and studied law. Later, he worked as a procurator (financial official) before serving as an admiral for the fleet operating in the Bay of Naples. Having gone ashore during the eruption of Mt. Vesuvius, Pliny was overcome by the fumes and died. Harris has a more poetic end for him – in poor health and convinced his career is over, Pliny stands on the beach at Stabiae and faces the volcano storm ‘like a Roman’.

Pliny began his military career in AD46, aged 23, and rose through the ranks, participating in the conquest of the Chauci, a Germanic tribe, and the building of several canals. His interest in Roman literature helped him forge friendships with senior officers, which helped him later in his career.

Having served his 20 years, Pliny retired to Rome to write, continuing a practice he’d developed in the army. He produced a biography of Pomponius Secundus, his one-time commander, and a 20-volume collection on the History of the Germanic Wars. However, he is best known for his books Natural History, which were accepted as accurate scientific texts until the Middle Ages.

Much of Naturalis Historia, which ran to 37 volumes in the end, was based on Pliny’s own observations and experiments, as well as snippets from his own works and that of other writers. His peculiar system involved an assistant reading aloud (presumably from existing texts) and Pliny, reclining in his bath, then dictating his own version to another assistant.

During Nero’s reign, Pliny was careful not to write anything too controversial, in case the crazed and murderous emperor decided to punish him. He had also given up his law practice, as another way to ensure he stayed under the radar.

Much of what we know about Pliny the Elder is from manuscripts written by his nephew, Gaius Plinius Caecilius Secundus, born in AD61. Gaius was the son of Pliny’s widowed sister, and as he was childless himself, Pliny made his nephew his heir – the younger Gaius also worked as a lawyer and writer.