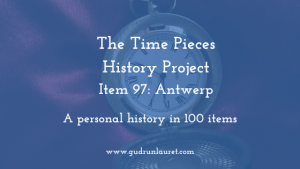 First time on the blog or new to the Time Pieces History Project? Find out what it’s all about here, and then come back to this page for today’s item – Antwerp.

Along with Leiden, Antwerp in Belgium is somewhere I visited a lot as a child, and have been back to several times since – most recently to watch my brother’s band play a gig. One of my dad’s oldest friends still lives there, so we usually visit her at the same time.

Antwerp is one of those places where it’s hard to know what to look at first. The railway station is spectacular, and I recommend going to admire it even if you aren’t catching a train. There are beautiful old buildings everywhere, and one of the shopping centres has the most amazing coffee shops I’ve ever sat in.

The History of Antwerp 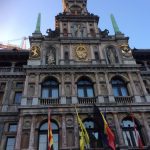 Antwerp is believed to have been a Roman settlement, and coins have been found printed with the name ‘Ando Verpia’. When it was part of the Kingdom of the Franks (about 567) it was known as ‘Andhunerbo’.

Depending on where the name came from, it may mean a couple of different things. In the Germanic language, ‘anda’ means ‘against’ and ‘werpen’ – ‘to throw’, so ‘land thrown up against the river bank’, either by nature or as a man-made defence. However, in Celtic, ‘Andoverpis’ would mean ‘those who live on both banks’. The third definition is below.

This second theory is perhaps borne out by the experiences of the area’s residents in 836, when Vikings attacked the city. They fled to an ‘aanwerp’ or alluvial mound, which was then became the site of the Steen Castle. Today’s modern city is built around the mound.

The River Scheldt was important as a boundary marker for the Holy Roman Empire in the 10th century, and was a key margraviate (border town) for Emperor Otto II. A Margrave was responsible for overseeing the town, and in 1076 Godfrey de Bouillon, who later went on to lead the First Crusade, held the position. It was the location of a religious order and then the headquarters of Edward III in the early 1300s.

As the 15th century drew to a close, Antwerp really came to prominence, when foreign trading houses left Bruges, which was in decline when it was cut off from the sea, and relocated to Antwerp. In the 16th century, it was the sugar-trading capital of Europe, as raw cane was imported through it from Spanish and Portuguese-owned plantations. Sugar refiners came from Germany and Italy to buy it up, and they were followed by the moneylenders.

It was this boom in importing and exporting which heralded in the Golden Age, with merchants and explorers from all around the world passing through. The city benefitted from the three successive commodities gaining popularity: pepper, silver and textiles, and in the 16th century Antwerp accounted for 40% of the world’s trade. However, the changes in what was the most popular export put pressure on the workers trying to make a living in the city, and after bankruptcies began in 1577, Amsterdam eventually took over.

This was also partly due to the Eighty Years War, which began in 1568 and effectively destroyed Antwerp’s

relationship with Bilbao, which had been a key trading ally. In November 1576, the Spanish Fury saw £2m damage (in today’s money) inflicted by Spanish soldiers, who also slaughtered 7,000 residents of the city.

Antwerp’s decline led to the Dutch Golden Age, and by 1800 its industries were all but gone. Napoleon hoped to restore some of its glory and re-establish it as a trading post, but the Battle of Waterloo put paid to that idea. However, in 1894 it was host to a World’s Fair, reminding the world of its illustrious past.

The city’s name, ‘Antwerpen’ in Dutch, is said to come from the word for ‘to throw’ or ‘hand throw.’ In Flemish folklore, the giant Druon Antigoon had the job of guarding the bridge across the River Scheld, and taking payment to do so from the people of the town (which presumably had a different name at that point!)

Antigoon was an intolerant chap, so if the townsfolk refused to pay, he simply chopped off a hand and chucked it 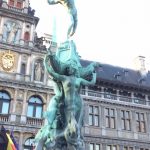 inthe river. This was unsurprisingly distressing for the locals, but they weren’t strong enough to defeat him.

One day, a young Roman solider called Silvius Brabo came into town, and decided that enough was enough. He slayed Antigoon (how is unclear) and threw the giant’s hand into the river. He was honoured by having a province – Brabant – named after him.

This act is commemorated in several ways: a statue of Brabo mid-throw stands outside the City Hall, and licenced bakers sell hand-shaped biscuits. There is also a giant hand sculpture resting on the pavement of Antwerp’s high street, although this was not custom-made.

French sculptor Henri de Miller created a giant human head with hand cupped around the ear in 1986 and placed it on a Paris street. Entitled ‘L’Ecoute’ (‘listen’) the head looked as if it was listening to the rumbles of the metro far below it. When the city of Antwerp bought the sculpture in 1991, they wanted to display only the head, which probably didn’t go down too well with de Miller. The head is still in Paris, so he must have replaced the hand at some point.

One of Antwerp’s most famous sons really made his name in England. Anthony van Dyck (or Antoon, to give him his Dutch name) was born in 1599 to a wealthy silk merchant, and was inspired by the Italian artists, whose works and methods he studied avidly.

His parents quickly spotted his talent, and he was soon studying under Hendrick van Balen, a baroque artist who specialised in tiny cabinet pictures. He soon outgrew his master, though, and set up his own studio at the tender age of 15, alongside his contemporary Jan Brueghel the Younger (who really was young at this time!)

The teenage van Dyck’s works were much admired, and he was admitted into the prestigious Guild of St Luke, which supported local artists. He also studied under Peter Paul Rubens, who dominated the Antwerp art scene of the day.

Van Dyck didn’t stay in one place for very long. He was invited by George Villiers, Marquess of Buckingham, to visit the court of King James I. From there, he spent six years in Italy, moving there in 1621. He based himself in Genoa, but travelled the country, drawing inspiration from the Italian masters.

It was in this period that he began to concentrate on the portraits for which he would later become famous, with a

series of works of Genoese nobles. He maintained his links with London, though, helping prolific art collector and successor to James, King Charles I, to grow his personal gallery. As well as sourcing works from other artists, van Dyck sent a number of his own paintings.

In 1632, he went back to London and was welcomed into the court of Charles with open arms. He was knighted and awarded an annual pension almost immediately. He was the official painter for the royal family, making multiple copies of pictures of Charles, his wife and children, which were sent as diplomatic gifts to courts around the world.

Van Dyck wanted to paint Rubens-style ceiling frescoes and landscape scenes, but the craze for portraits (and Charles’ rapidly dwindling royal purse) meant that he didn’t get to branch out as much as he wanted. He set up his own studio, where he employed Dutch and Flemish painters trained in the same style he had been, and ran a portrait production line.

Interestingly, van Dyck’s other legacy is related to fashion rather than art. His male subjects were often shown with goatees with sharp points and wide, lacy collars, which are known as the van Dyke beard and the van Dyke collar respectively. A ‘van Dyke’ fancy dress costume was popular in George III’s time too.