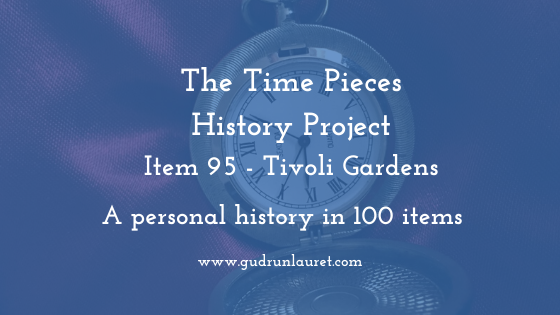 First time on the blog or new to the Time Pieces History Project? Find out what it’s all about here, and then come back to this page for today’s item – Tivoli Gardens.

As a poker player, Mark sometimes wins entry into a competition happening abroad; we’ve been twice to Malta and most recently to Madrid, but the first prize he won was to Copenhagen. The prizes usually include travel and accommodation, and he’s allowed to take a guest (I make sure that’s me!)

We stayed in a swish hotel and attended private parties in the casino and at a club in town, where everybody was blonde, six feet tall and breathtakingly good-looking. We explored the city, deciding on the hottest day of the year to walk about six miles in the heat. It was worth it though, because we saw The Little Mermaid, the palaces and much more of Copenhagen.

The History of the Tivoli Gardens 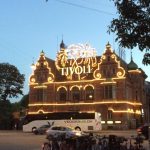 The Tivoli Gardens’ own website describes it as an amusement park, which seems a bit of an understatement. It has a food hall, restaurants and even a hotel alongside the funfair rides. There is also a theatre for ballet, music performances and the youth guard, an orchestra and music school.

The Tivoli Youth Guard is the first in the world, dating back to 1844, when the Gardens founder planned a ‘Lilliputian Military’ for the second anniversary of its opening. At that time, the guard was boys only, but today there are 100 members of males and females. As well as music, the Colour Guard continues the Victorian military traditions.

The Gardens were founded by Georg Carstensen, who had been impressed by parks he’d seen while travelling. He had to ask the king (Christian VIII) for permission to open his own, and once royal approval was granted, he opened on 15 August 1843.

Carstensen, born in Algeria in 1812, was the son of an army officer and grew up in the Near East. He went on to serve in the Danish army himself, which enabled him to travel. There’s not much evidence that he studied architecture or landscaping, but after a disagreement with the rest of the Tivoli managing board when he joined the war with Prussia, he served in the Danish West Indies before moving to New York, where he designed the New York Crystal Palace.

One of the key themes of the Tivoli Gardens is pantomimes, and the Peacock Theatre was built in 1874. Its music director was Hans Lumbye, a composer of over 800 pieces and a talented violinist. Much of Lumbye’s work was exclusively for the Tivoli, although in its off-season he toured with his own orchestra.

The wooden gated entrance was revamped in 1890, and one of the restaurants nearby was a meeting place for First World War profiteers. When the train station opened opposite in 1912, an additional entrance was put in for the convenience of those visiting from out of town.

And what about the amusements? A rollercoaster had been constructed in 1843, with each ride lasting seven seconds. In 1914, this was replaced, and the wooden tracks are still in use today. There are only seven such rollercoasters in the world, and each train is operated by its own brakeman. Today, there is a Ferris wheel, a winter carousel, dragon boats as well as some more dramatic rides.

The History of Copenhagen

A settlement existed on the site of today’s Copenhagen back in the 11th century, but it wasn’t until mid-way through the following century that it became significant; Danish statesman and priest Bishop Abaslon was a wealthy landowner and was granted the area by the crown.

A harbour was built, and fortifications went up in the 13th century. These turned out to be handy, as the Germans 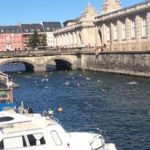 began attacking it when its commercial growth threatened the Hanseatic League of merchants who controlled most of the trade along the Baltic (from the Old High German ‘Hansa’ – ‘convoy’).

Christian IV expanded it considerably after he took the throne in 1596, adding spectacular buildings with the best architects he could find in Germany and the Netherlands. The city was attacked again by the Swedes and by a British fleet (twice) before it was reinforced.

In Absalon’s time, Copenhagen served as a trading post between Roskilde and Lund (Sweden) and much of its wealth came from herring fishing. With the coronation of Christian IV, it became an international port and a cultural, military and religious centre. Christian was keen on exporting but not so much importing, and had factories built to ensure that as much of the city’s requirements could be met at home.

The Amalienborg Palace is a must-see – four identical yellow palaces facing each other across a courtyard, with a statue of King Frederick V, who founded the complex in 1750. Initially intended for local nobility, the royal family moved in instead.

The first palace was built by Queen Sophie Amalie, wife of Frederick III (reigned 1648-1670), and featured a spectacular garden. It took four years to build, with work completed in 1673. It burned down during a celebration for the 44th birthday of her son, Christian V.

The buildings are only identical on the outside, and the original noble owners could decorate how they liked. Two are currently open to the public, and all are used by today’s royal family as their winter residences. 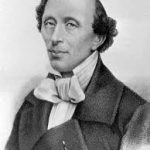 Probably one of the world’s most famous children’s writers and one of Denmark’s best-known exports, Hans Christian Andersen was one of the first visitors to the Tivoli Gardens when it was opened to the city’s most illustrious citizens first.

He was born in 1805 and attended an expensive boarding school. His family were not particularly wealthy, so it has been speculated that perhaps he was an illegitimate member of the Danish royal family, although there has never been any confirmation of that.

He moved to the capital aged 14, and worked as an actor, although this was short-lived. He was soon back at school, this time under the patronage of Jonas Collin, who was actually a director of the Royal Theatre. Collin funded the remainder of Andersen’s education, and encouraged him to write, despite his tutors trying to persuade him otherwise.

Fortunately, Andersen DID write, with a short story published in 1829 being well-received. This was quickly followed by a poetry volume, a travelogue and a play. He received a grant from the king which he used to travel Europe, and his later works were informed by his journeys.

It was not until 1835 that his first book of fairy tales was published, although these went mostly unnoticed. Although famous for writing The Little Mermaid (a statue of which sits today in the harbour of Copenhagen), The Emperor’s New Clothes and Thumbelina, Andersen continued to write for adults as well as children, and later focused on Scandinavism – the cultural links between Norway, Sweden and Denmark.