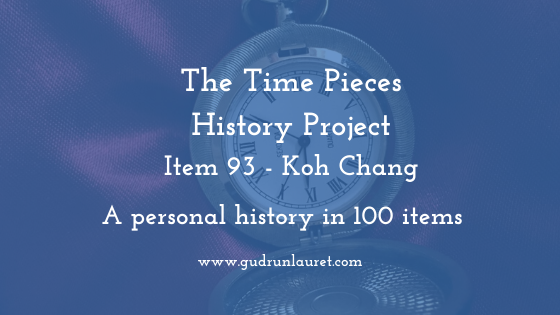 First time on the blog or new to the Time Pieces History Project? Find out what it’s all about here, and then come back to this page for today’s item – Koh Chang. 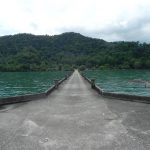 Mark and I spent a week or so on Koh Chang Island as part of our extended honeymoon in 2012. We travelled from India to Bangkok, where we stayed for a couple of days, before going up to a town not far from the border called Udon Thani.

From there, we spent several weeks in a tiny place called Nong Han, staying with a friend Mark had made through a football forum but never met. The residents of Nong Han were warm and welcoming, and on our second day we were whisked off to a party at the local Buddhist temple. I was even persuaded to get up and dance, and the local ladies taught me some traditional moves.

Just before we went home, we went to Koh Chang to explore, to spend time with new friends and to see some new sights. Eight years later, we still talk about that trip, and hopefully we’ll get back there soon.

The History of Koh Chang

‘Koh’ is the Thai word for island and ‘Chang’ is elephant, so Koh Chang = Elephant Island. However, the name came about because the island is shaped like the head of an elephant, not because it’s home to a herd of them. There IS an elephant sanctuary on the island, but they’re not native to the area.

Koh Chang is the third-largest of Thailand’s islands, after Phuket and Koh Samui, although not as popular with tourists (not that you’d notice!) and can be quieter because of this. It’s split into several different areas, with resorts, restaurants, bars, souvenir ships and more in each. 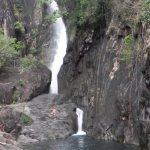 we poor honeymooners found ourselves in. While parts of the beaches are marked out for use exclusively by guests, you can walk along the white sand, paddle and sip a cocktail as the sun sets pretty much anywhere.

Koh Chang is actually one of 52 islands in an archipelago and is part of the Mu Ko Chang National Park. This vast marine park covers several provinces and most of it is offshore; coral reef means it is protected, and there are all kinds of wonderful fauna and flora.

As a mountainous island, there are plenty of steep parts to Koh Chang. We had a hair-raising scooter ride up one windy path to reach a waterfall at the top. It was worth the trip, as the scenery was beautiful and we were able to swim in the pool below, but coming back down was nerve-wracking!

Until the mid-20th century, Koh Chang was home to only a few families, who earned their keep growing fruit and coconuts. In 1941, a battle took place in the water around the island, and this is commemorated every year. Today, Koh Chang’s economy mainly comes from tourism, with boat rides, scuba diving, scooter rental and accommodation making up only part of it.

A part of World War Two that I don’t remember learning about in A-level history is the Franco-Thai War, which took place between October 1940 and May 1941. The dispute was between Thailand and Vichy France over parts of French Indochina, formerly under Thai control.

French Indochina covered various parts of Southeast Asia from 1887, including regions of Vietnam, Laos, Cambodia and the Chinese territory of Guangzhouwan. Given how close Thailand is to those places in comparison to France, it’s not surprising that they wanted to have control of them again. Negotiations had begun to see if the French would be flexible. 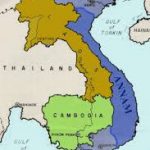 However, the Fall of France and subsequent occupation by Germany meant that they were unable to support their colonies or send supplies. When the Japanese occupied Indochina in 1940 and set up military bases with no objection from France, the Thais saw this as an opportunity.

The French forces in Indochina numbered 50,000 men, but they were poorly equipped, in comparison to the Royal Thai Army, which was also a bit bigger. When bombing raids and armed attacks took place across the area, the French struggled to retaliate.

Several battles took place in January 1941, with heavy losses on both sides. The Japanese stepped in to mediate, and an armistice was declared, followed by the signing of a peace treaty in May of the same year. The French ceded control of some Cambodian territories to Thailand as part of this treaty.

The Japanese occupied the area until March 1945. When they surrendered, the Viet Minh briefly took control, but the French soon returned to take charge. The upshot of this was a battle for independence towards the end of 1946, known as the First Indochina War.

In 1949, the State of Vietnam was created as an alternative to the Viet Minh, effectively splitting the country in two. French attempts to reunite them were unsuccessful. The Kingdom of Cambodia and Kingdom of Laos declared independence in 1953, and France withdrew from Vietnam in 1954.

The Battle of Koh Chang

So how was Koh Chang, an island about an hour away from the Thai mainland, involved in this? The waters around the island was the location of a battle between the French navy and the Royal Thai Navy on 17 January 1941, resulting in a clear victory for the French.

The Thais had a small fleet, including a coastal battleship, which were designed primarily to defend the coastline and 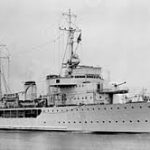 not as large as battleships. They were well-armoured, which of course made them heavier and slower. The French warships, well-equipped and swift, attacked with vigour, sinking one boat and grounding another. They attacked before dawn and took the Thai forces by surprise, with the battle over within three hours.

The powerful Royal Thai Air Force commenced attacks, but didn’t do much damage. The Thai side had lost 34 lives and two boats, but the French emerged relatively unscathed. The battle is commemorated on Koh Chang every year, and honours the tenacity and bravery of the sailors.