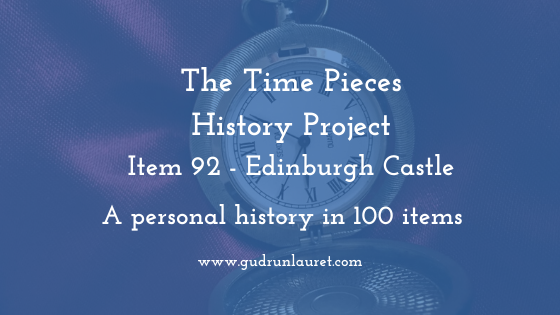 First time on the blog or new to the Time Pieces History Project? Find out what it’s all about here, and then come back to this page for today’s item – Edinburgh Castle. 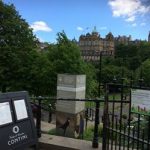 Edinburgh is a mere 50-minute train ride from Newcastle Central Station. Tickets are cheap, and hotels often are too. I can’t actually remember the first time I went to Edinburgh, although I know we didn’t go when I was younger. I may have been in my early 20s!

Still, I’ve made up for it now. I’ve been for conferences, hen dos, birthday parties, The Fringe, the Christmas market, random weekends and a stopover on the way back from Glasgow or even the airport. I’ve yet to get there for Hogmanay and the Tattoo though, so I should make an effort to do that soon.

Edinburgh is a beautiful city, and there’s so much to see and do that you’d need a week to do it justice. In the new town, there are bars, restaurants and shops galore, and Princes Street and Rose Street are always bustling. Trams run through the city centre, and Princes Street Gardens are stunning all year round.

The old town looms over the Gardens, with narrow staircases and secret alleyways. I once foolishly dragged my suitcase from Waverly Station up steps instead of the hill to get to the Grassmarket. It’s worth it though, especially when you get to the Royal Mile.

The History of Edinburgh Castle

Staggering up to the old town is not the end, however. To reach the castle, you have to go up Castle Hill too, and then the castle is suddenly in front of you, huge and with its defences hewn from rock.

Archaeologists have found evidence of human life on Castle Rock as far back as the Iron Age (2nd century AD), although interestingly, the Romans don’t seem to have bothered with it before that. The rock is actually a volcanic plug, and when it rose 350 million years ago, it pushed up the surrounding stones too. The builders took advantage of this, and the castle is only accessible from the east.

It’s thought that Ebraucus, a legendary King of the Britons, founded Edinburgh, along with York, Dumbarton and ‘The Maidens’ Castle’. It’s extremely difficult to place Ebraucus in history, although he may have lived in around 1000 BC.

Geoffrey of Monmouth said that the king had 20 wives and fathered 50 children, so I can imagine that he’d need a big house to hold them all. The ‘Maidens Castle’, also the Land of Maidens and other variations, is an ‘other world’ populated only by women and is found in medieval and Celtic stories.

It’s thought that there was a castle on the rock in the 1093 AD, when King Malcolm III (son of Duncan, who was 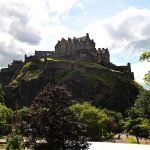 slaughtered by Macbeth) died and his brother Donalbane besieged the castle. It’s not entirely clear why he did this, as Malcolm was killed in Northumberland during an ongoing dispute with Robert de Mowbray. Malcolm’s younger son, David, who ruled after his father, developed the castle site in the early 12th century, including constructing two stone buildings.

From then on, Edinburgh Castle was a significant defensive structure, and one which the British and the Scots fought over for centuries. Edward I took the opportunity to hop into the Scottish throne after the death of Alexander III in 1286, and 10 years later began what would become the First Scottish War of Independence. In 1314, a nephew of Robert the Bruce, Thomas Randolph, claimed it back.

Cannons and defensive ramparts were added over the centuries. The castle website says that after the Lang Siege of 1573, the Half Moon Battery was built and armed with bronze guns with the rather lovely name of the Seven Sisters. It was used as a garrison from the 1650s, and parts of it are still used by the military today.

The Scott Monument, in Princes Street Gardens, is incredible. According the Edinburgh Museums website, it is one of the largest monuments to a writer anywhere in the world. It looks like a Gothic church, with its vast columns and spires, and a statue of the great man (and his dog) seated in the centre.

After Scott’s death in 1832, the city decided to hold a competition to find an architect to design a suitable monument. It took two years before George Meikle Kemp’s plan was chosen, and another six before work began. Built from Binny sandstone from West Lothian, the tower stretches over 60 metres (200 feet) into the air. A viewing platform, 287 steps up, gives panoramic views across the landscape. 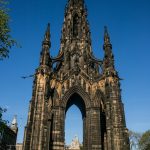 Interestingly, Meikle Kemp was self-taught, and submitted his design under a pseudonym, worried that his lack of experience would discount him. Tragically, he didn’t live to see it completed and inaugurated, having drowned in the Union Canal after falling in on a foggy night.

Scott is only one of 68 statues around the monument; many of the others represent characters from his novels. Real-life figures are also depicted, including Mary, Queen of Scots, Robert the Bruce and King James I and King James V. There are also the faces of several writers and poets, such as Robert Burns, James Hogg and Lord Byron. The uppermost viewing platform is supported by eight kneeling druids.

The statues were carved by several different sculptors, and Scott himself was made by Sir John Robert Steell, who lived in Edinburgh and was the son of an acclaimed sculptor. The statue is made from a single piece of marble and weighs 30 tons and Steell spent six years carving it. Many of his other works can be found around the city, but some are as far away as Calcutta. His brother Gourlay was Queen Victoria’s animal painter and his son identified a cardiac murmur later named after him.

And what of Sir Walter Scott? Born in 1771, Scott was a playwright, historian, poet and novelist, responsible for 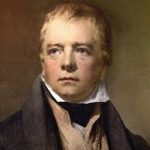 works including Rob Roy and Ivanhoe. His day job was as Clerk of Session in Selkirkshire and served as a judge, fitting in his writing around his work. That goes to show that ‘I don’t have time’ is not an excuse if you want to be a writer!

He studied classics at the University of Edinburgh from the age of 12 (!) and attended literary salons where he met many great writers, including Burns. He later served in the Royal Edinburgh Volunteer Light Dragoons, translated German ballads into English and was heavily influenced by the oral tradition of the Borders. Edinburgh’s Waverly train station is named after his first novel, Waverly, published anonymously in 1814.

Another famous dog statue, although one that commemorates a sadder story than that of Scott and his dog Maida, is Greyfriars Bobby, a Skye terrier. Bobby’s devotion to his master has earned him a life-size statue and a bar named after him, but the tale is not without controversy.

The accepted story is that his owner, John Gray, began work as a watchman for the Edinburgh Police in 1850. Bobby was his faithful companion, accompanying Gray on his nightly rounds until his death from tuberculosis in 1858.

Gray was buried in Greyfriars Kirkyard, and Bobby sat beside his grave every day. Bad weather and the kirkyard gardener’s wrath were not enough to dissuade Bobby, so in the end he got his own shelter while he kept guard.

However, Bobby didn’t stay there all day – he went with a local cabinet maker to the coffee house where Gray had gone to eat, and was given a daily meal. Crowds would gather daily to see Bobby. When a law was passed in 1867 that stated any unlicensed dogs would be destroyed, The Lord Provost of Edinburgh, Sir William Chambers, paid for a licence and a collar for Bobby. 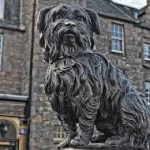 After Bobby’s death at the age of 16 in 1872, the president of the RSPCA’s ladies committee arranged for a granite fountain and statue to be placed in the kirkyard in commemoration of Bobby’s loyalty.

However, in 1934, a local councillor named McLaren related conversations he’d had with the coffee house owner about Bobby back in 1871. One of the questions has arisen over who actually owned Bobby – a farmer, also called John Gray, was said to be in possession of a Skye terrier, and the coffee house owner believed the dog he fed was his.

Furthermore, it seems that dogs hanging around in graveyards was fairly common in Victorian times. Over 60 stray dogs were identified as living in graveyards across Europe, and the curates and churchgoers fed them. Owing to the dogs’ habit of sitting beside graves, people assumed their owner was buried below them. Controversially, one theory goes so far as to say that Bobby died in 1867, only to be replaced by a doppelganger.