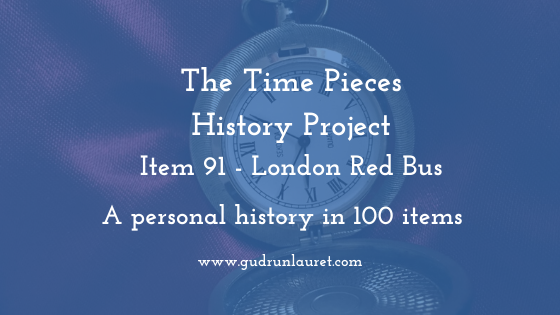 First time on the blog or new to the Time Pieces History Project? Find out what it’s all about here, and then come back to this page for today’s item – the London Red Bus.

The first time I went to London was on a school trip when I was 10. It took us hours, because we went on by coach, but it was very exciting to visit the capital. We spent an entire year rehearsing our own version of Joseph and his Amazing Technicolour Dreamcoat, so we went to watch a performance. Jason Donovan had just retired and Philip Schofield taken over, which was disappointing, but it was good anyway. We also went to see Starlight Express, which I enjoyed more.

That trip was the first time I had a Big Mac at McDonalds (which I ate by taking the first burger off and eating it like an open sandwich!), homeless people (yes, really), and the iconic London red bus. I have never actually ridden one in London, although I have been on a couple of the tourist versions that go round other big cities.

The History of The London Red Bus 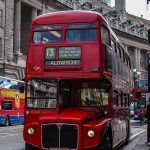 Unsurprisingly, the reason the buses are red is a marketing tactic – in 1907, the London General Omnibus Company (LGOC) wanted to make sure they stood out from all the others. They also had the job of managing all of the buses operating in London and making sure everything ran smoothly.

Although horse-drawn omnibuses had been operating in the city as early as 1829, there wasn’t a clear way to differentiate which buses went where until numbers were introduced in 1906. The bus companies assigned a digit and a letter to each of their routes, but in 1924 the Metropolitan Police were given that task. Passengers endured almost a decade of confusion before the bus companies took the job back.

The LGOC began using motorised vehicles in 1902, and started manufacturing their own in 1907. The National Steam Car Company began operating steam buses in competition to LGOC in 1909, but were persuaded to withdraw the buses in 1919.

Early buses were single decker, but still featured the curved roof. The double deckers we’re used to seeing from films and on the roads featured an open section at the back with a pole for people to grab, and a second set of stairs up to the top deck, which was sometimes open to the elements.

The front of the bus is also distinctive, with a cutaway section on the kerb-side, presumably to give easier access to the engine. The driver could see the passengers getting on at the front, and any he missed would be spotted by the conductor, whose job it was to sell tickets (and nab anyone who’d hopped on at the back hoping to be unnoticed).

The History of the Omnibus

The omnibus (from the Latin ‘for all’) began life in Nantes, in North West France, where an enterprising chap by the name of Stanislas Baudry built a steam-powered flour mill in 1823. The mill produced a lot of hot water, so Baudry opened a bathhouse. However, the mill was miles away from where most people lived in Nantes, and they didn’t much fancy a long walk to have a wash only to get grimy again on the way home.

Nevertheless, Baudry was undefeated. He then put on a shuttle coach to take 16 people, eight per bench, to and from the city centre out to the bathhouse. He ran it to a regular timetable, which meant that soon he had passengers who weren’t going all the way out to the flour mill, but somewhere on the road to it.

He realised that he had another opportunity on his hands, and made his omnibus service official in 1826.  He acquired two business partners and got permission to expand to Bordeaux, Lyon and eventually Paris. The authorities of each place set the routes and Baudry and his partners had 100 vehicles on the roads.

At around the same time, an Englishman named John Greenwood introduced a system in Manchester where people 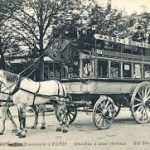 could request to be picked up and dropped off without pre-booking, which was necessary with the stagecoach.

A coachbuilder by the name of George Shillibeer was recruited by Baudry to build him a carriage strong enough to carry a lot of passengers in one go. Having succeeded and helped Baudry grow his business, Shillibeer decided to replicate the service back home in London.

He set up a route from Paddington to Bank, running four coaches in each direction every day. He was so popular that although he had named his vehicles ‘omnibuses’ they were known for a while as ‘Shillibeers’. The LGOC was founded in 1855 to regulate the omnibus services. The first horse-drawn omnibuses appeared on the streets of New York at the end of the 1820s, and in Berlin, the first route opened in 1825, operating to timetable. A bus service began in 1840.

While the Ancient Mesopotamians had invented a box-on-wheels that horses could pull way back in 3,500 BC, what we’re looking at here are the forerunners to the ominbuses, which could transport groups of people long distances or couples around a city.

The uncomfortable-looking Hansom cab, with the driver perched above the small carriage, was named after its inventor, Joseph Hansom, who patented it in 1834. It was pulled by one horse and featured two large wheels. They could hold three people at a squeeze. A little hatch in the roof allowed passengers to talk to and pay the driver.

The Landau carriage was made in the German city of the same name in about 1743. These were four-wheeled, four-horse convertibles, and designed to put its occupants, who sat facing each other, on display. The coachman sat up front, and there was a high seat at the back for the groom, who would usually be the one who sprang down to open the half-door.

The chaise was similar to the hansom, but it was lower to the ground and a bit more comfortable. It had no driver, so one of the two occupants would drive; they were intended for pleasurable tootling about. A post-chaise was a closed-sided vehicle, with two or four horses and a corresponding number of passengers. Designed to cover long distances, the horses would have been replaced at staging posts. Stagecoaches were similar but larger, with space on the top for additional seating or luggage.

London Hut: The History of the London Bus
Parisian Fields: The Invention of the Omnibus
Horse Journals: A Carriage Ride Through History