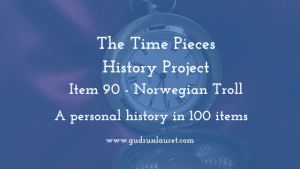 First time on the blog or new to the Time Pieces History Project? Find out what it’s all about here, and then come back to this page for today’s item – the Norwegian Troll. 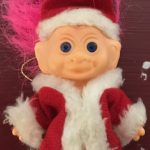 As well as visiting Sweden for work, my dad spent some time in Norway. The first time he came back, he brought me a tiny, grey troll statue with a long, pointy nose. It was speckled with something that glittered, and the information on the side of the box explained that when trolls were exposed to sunlight, they turned to stone.

That troll is sadly lost somewhere, or perhaps he found his way back to Norway. However, I still like trolls. The odd-faced, spiky-haired ‘Russ troll dolls’ were all the rage when I was at primary school, and I collected some of those. I think the one in the picture is my brother’s though! In Norway, when we visited back in 1991, trolls that looked more like little old men were in shop windows everywhere.

The History of The Norwegian Troll

The origins of the word ‘troll’ are unclear, although there is an idea that it comes from the proto-Germanic ‘trullan’. Interestingly, the name is applied to werewolves, fiends, giants and demons, not necessarily wrinkly little people. ‘Troll’ may be the term for ‘mischievous creature’ or one of four creatures, along with the heroic ‘risi’, monstrous ‘þurs’ or the giant ‘jötunn’.

As folklore developed in Scandinavia, trolls tended to settle into one form, often old, slow, stupid, but often strong. This was when they began to look more like humans. They are akin to fairies and other creatures of nature, and are sometimes otherworldly.

There is also a notion that they are also unfriendly and unhelpful, and prefer to be left alone in isolation. Trolls tend 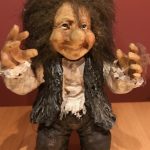 to live in remote locations such as caves and mountains, and, if not on their own, then in family pairs – mother and son or father and daughter.

The mountain and forest trolls are portrayed as big and stupid, and fairly savage. They use uprooted trees as clubs, set riddles for unwary travellers and summon up hurricanes and avalanches. By contrast, cave trolls are small and stumpy, and while they’re often shown as being helpful in modern stories (think of the rock trolls in Frozen) they are not fond of humans at all.

However, while they might be wicked, they can be defeated. There are tales of humans tricking the trolls into letting them continue on their journey, or even kill themselves, by using their superior intellect. They can also be driven out of the land by the ringing of church bells (trolls are obviously pagan) or killed by lightning, which is how they would have been dispatched after Thor hunted them down.

When I think ‘mythology’ I usually think of the Greek legends, or the Roman versions that came after, and I would guess that most other people do too.

However, Scandinavia has its own rich mythology, and it’s considered to be older than any other tales, because much is focused on the creation of the world. AS Byatt’s ‘Ragnarok’ is a wonderful retelling of the death of the old gods, which I highly recommend.

The Norse myths are concerned with the gods and their interactions with other beings, including trolls and other creatures of nature, and humans. One-eyed Odin is the ruler of Asgard, similar to Olympus, but also the site of the feasting hall, Valhalla. The goddess of wisdom, Frigg, is his wife, and their son Baldr is the ruler of Hel.

Another focal point is the ash tree Yggdrasil, considered to be the tree of knowledge. The vast tree reaches to the 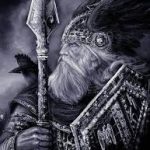 heavens, its roots are in the sea, and connects the nine worlds where different beings live.

The gods hold their ‘things’ (assemblies) there, and Odin hung himself by his foot in its branches for nine days in order to learn the secrets of the runes. One of the meanings of my name is ‘Gud’ (god) ‘Rune’ – the secret rune of god. ‘Yggdrasill’ originates from the word ‘Yggr’, another of Odin’s name, and ‘drasill’ – ‘horse’, meaning ‘Odin’s horse’ or gallows.’

The Norse myths are also full of serpents, wolves, dragons, the primordial being Ymir, who birthed Ask and Embla, the first two humans, from his armpits and whose body became the world, and other gods, including Loki, the trickster.

Another Norse tale, perhaps not as well known, is that of the hero Sigurd, whose death brought down the Royal House of Burgundy, the Niflung clan. In Germany, he is known as Siegfried and the royal family are the Nibelungs – the word may have its origin in the term for ‘mist’ – ‘nebel.’ The tale varies quite considerably in the two languages.

Interestingly, the two names are not actually the same. While the first part comes from the word for ‘victory’ (‘sigi’), the second part of Sigurd comes from ‘ward’ (protection’), while ‘frið’ means ‘‘peace’. Whichever version you go for, the hero is not based on one individual but on several men, all high-born.

The German epic poem ‘Nibelungenlied’, or ‘Song of the Nibelungs’ was written in 1200, and describes Siegfried coming to Worms to claim the princess Kriemhild from King Gunther, her brother. The king agrees, but first asks him to help him win Queen Brunhild, a warrior queen.

Siegfried has a hard time of it, as he has to slay a dragon and help Gunther fight the Saxons, as well as persuade Brunhild to marry the king. She challenges Gunther to a battle of strength, which she knows she will win because she’s far stronger. Siegfried, wrapped in an invisibility cloak which he handily has with him, helps Gunther win. 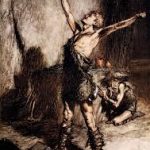 On their return to Worms, the marriages of Brunhild and Gunther, Siegfried and Kriemhild take place. Gunther’s wedding night is a disaster, as his warrior wife over powers him and strings him up from the ceiling. Siegfried is called upon to deal with the problem, and the implication is that he sneaks in under his cloak, beats Brunhild and sleeps with her.

Years later, the two queens quarrel about who is more senior; Kriemhild lets slip that Siegfried raped/slept with her and in retaliation Gunther permits the murder of his brother in law and the theft of his treasure. Kriemhild goes on to marry King Etzl of the Huns (Atilla the Hun), invites her brothers and her husband’s murderer to her court, kills them and ends up hacked to pieces herself.

The German version is believed to be based on two Norse legends, one written in the Prose Edda, written by Icelandic historian Snorri Sturluson in 1220, itself inspired by the Poetic Edda, dating possibly 200 years earlier.

In the Scandinavian tale, Siegfried is Sigurd and is the offspring of a violent warrior, Sigmund, and grandson of a Valkyrie. Brynhild is also a Valkyrie and has fallen out with Odin. She agrees to marry Sigurd once he has his own kingdom.

Meanwhile, Princess Gudrun of the Nifelungs (Kriemhild) dreams of the death of a stag at the hands of her brothers. 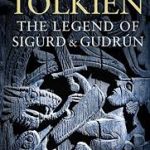 Her witch-mother tells her it’s a good omen, but Gudrun knows her future husband will die. Nevertheless, after Sigurd arrives at court, her brother Gunnar (Gunther) and their mother drug him, causing him to fall in love with Gudrun.

In this version, Sigurd disguises himself as Gunnar to ride through a ring of fire, sleeps with Brynhild and she marries the real Gunnar. Soon after, Brynhild learns the truth and curses Sigurd. Gunnar and his brother slay the hero in his sleep, Brynhild falls on her sword and Gudrun ends up married to Atli, who kills her brothers.

The most famous version of this tale appears in the 1857 German opera by Richard Wagner, Der Ring des Nibelungen – ‘The Ring of the Nibelung’, although JRR Tolkien penned ‘The Legend of Sigurd and Gudrun’ in the 1930s. The poems went undiscovered until his son Christopher found, edited and published them in 2009.

Life in Norway: The Mythology of Norwegian Trolls
Mythology Wikia: Norse Myths
Timeless Myths: The Cycle of the Ring