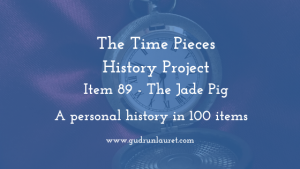 First time on the blog or new to the Time Pieces History Project? Find out what it’s all about here, and then come back to this page for today’s item – The jade pig.

The Jade Pig – Introduction to Item 89

When I went to Australia the first time, we had stopovers in each direction – Singapore on the way out, and Hong Kong on the way back. While Singapore felt very westernised (it’s also famous for being one of the safest places in the world) Hong Kong was not. There were few signs in English, there were fewer tourists, and to food markets were packed (I lived on fish balls for the three days we were there!)

One day, we went over to Kowloon on the Star Ferry, a rickety transport boat that takes people back and forth across the bay. We paid a few pence extra to sit on the top deck instead of being crushed in the cabin, and went to explore the markets. This little jade pig caught my eye because I liked his smiley face, and I decided to collect pig ornaments as souvenirs from then on. Unfortunately, I’ve completely forgotten to do this in the intervening decade!

The History of Jade

The word ‘jade’ comes from the Latin ‘ilia’ – ‘flanks’ (the kidney area) because it was believed to have healing properties for the kidneys and loins, but its origins are very much in the East, not the West.

Jade was found in river deltas, and was mined in at least 6,000 BC. Ornaments made of jade have been discovered in tombs of Shang kings, whose dynasty covered the period 1600 to 1050 BC. In the Han Dynasty, the second dynasty of China, royals were buried in suits of jade, and it was considered an imperial gem.

As well as funerary objects, jade was used to make ornaments, jewellery and for household items. It was even used to make calligraphy brushes and opium pipe stems, as it was believed to increase the lifespan of those who used them (although what state they would be in, it’s hard to say!)

Jade was more valuable than gold, with white jade being highly prized. It was a symbol of wealth and nobility, and 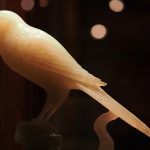 yearly tributes of jade were sent from the Kingdom of Khotan on the Silk Road to the Chinese Imperial Court. Similarly, in Korea, jade was used for burials of the aristocrats, and included in gold crowns worn by the Silla royal family. In India, a 5-foot statue of the spiritual teacher Mahavira stands beside a Jain temple in Andhra Pradesh.

Jadeite, an impure form of the stone, is now more commonly used, not least because the nephrite jade supplies have almost completely run out. Jadeite comes in more colours, including pink, orange and brown, and was imported into China from Burma in the 19th century. Much of the world’s jadeite comes from Myanmar (Burma) to this day, and the deposits mined in the north of the country are the purest of all.

Jade is also significant to the Maori culture in New Zealand where it is called ‘greenstone’ and it is a protected treasure. Found only on the South Island, which is known as ‘Te Wai Pounamu’ – ‘The Land of the Greenstone Water’.

The stones are passed down through the generations, and the oldest ones are prestigious, because their history can be documented. As well as jewellery, the Maori used jade as weapons, tools, ornaments and gifts, particularly to seal a deal.

The name ‘Kowloon’, somewhat confusingly, originates from a term meaning ‘nine dragons’, which are actually eight mountains and one Chinese emperor. The south part was given to the British in 1860 and used mostly for tiger-hunting, and the north was handed over in 1898. Renovation and building work began in the 20th century.

The history of the Kowloon Walled City dates from the Sung Dynasty of 960-1297, when it began as a small fort to house the imperial soldiers who controlled the salt trade. It was abandoned for centuries, although a small group of military were stationed there in the 1600s.

When Hong Kong was ceded to the British in 1842, it became a garrison town, where the commanders could bring their families. This also meant that the Chinese could monitor what the British were doing. It was captured briefly in 1854 during the Taiping Rebellion, which was a civil war between the ruling Qing Dynasty and the Taiping Heavenly Kingdom (a group of nationalist Christians, keen on reform). 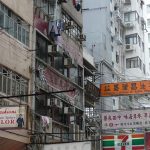 At the second part of colonial conquest, when the British took over their 99-year lease in 1898, the City refused to accept their rule, so China kept temporary control until a ‘colonial administration’ was formed. For a decade, it was loosely managed by the Chinese, but in actual fact was lawless and rife with criminality.

Eventually the British took charge, although in practice did nothing with it, and all but abandoned it to the criminals. This decline continued until the Second World War, where part of the walls were destroyed by the Japanese. After the war, Chinese refugees made their homes there, although in 1995 it was demolished and the area redeveloped.

The fleet apparently boasts 12 boats today, but 12 years ago it felt like there was only one and it was in continuous service (even though that wasn’t the case!) When we got home and I showed my holiday snaps to my adopted grandfather Dennis, he produced a photo of his own, taken in front of the Ferry in about 1946. It didn’t look much different!

People needed to cross the harbour, so in the beginning they went in sampans, which are small, flat-bottomed boat and are often used as fishing boats. ‘Sampan’ comes from the Cantonese ‘sāan báan’ – ‘three planks’, a term which accurately describes how they’re made.

It’s hard to imagine that the Victorian colonialists would have been keen on a sampan trip, and in 1870 a wooden-hulled boat was brought over from England by a man called Grant Smith, although he didn’t operate a regular service.

Three years later, steam ferries began operating in the harbour to take people from Hong Kong to Kowloon, although 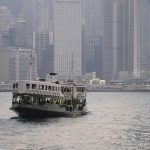 Pic © Will Nemao via Pixabay

this was swiftly shut down, amid fears that passengers were then provided with easy access to some of the seedier parts of Kowloon.

In 1888, a merchant called Dorabjee Naorjee Mithaiwala set up the Kowloon Ferry Company following the purchase of Grant Smith’s boat. Next, he obtained two steam boats, and within a decade he had four boats, carrying 100 passengers each and crossing the harbour 147 times a day. The business later became the Star Ferry Co Limited.