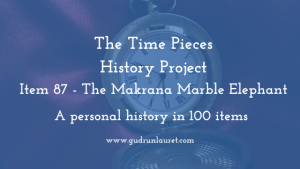 First time on the blog or new to the Time Pieces History Project? Find out what it’s all about here, and then come back to this page for today’s item – The Makrana Marble Elephant.

For our honeymoon, Mark and I went to India. We started off in Delhi and travelled the Golden Triangle – on to Agra and Jaipur. We saw stunning forts, temples and more. While at the Taj Mahal, we learned about Makrana marble, mined in the town of the same name in the nearby area of Rajasthan (‘Land of Kings’).

The elephant is made from Makrana marble, and typical of the souvenirs available. We were very tempted by one of the beautiful chess sets, but they were a bit dear. Rather terrifyingly, to assure us of how securely packaged our chess set would be to keep it safe on the flight home, the shop keeper chucked a wrapped one as hard as he could across the shop floor.

The Taj Mahal is made from Makrana marble, as is the nearby Baby Taj. From a distance, both buildings look pure white, and it’s only when you get closer that you see the semi-precious stones worked into their walls. We enjoyed the Baby Taj more, because although smaller, you can walk all over it and there are no long queues.

The History of Makrana Marble

The quarried of Makrana are thought to be the oldest in India. Made of layers of sedimentary rock deposited during the Proterozoic eon (from the Greek ‘protero’ – ‘earlier’ and ‘zoic’ – ‘life’) into the Delhi Basin, the rocks changed from limestone to marble during something termed the ‘Delhi Orogeny’ 1450 million years ago.

It comes in two forms – white and albeta (brown markings), and is one of only two kinds of calcitic marble. Once the 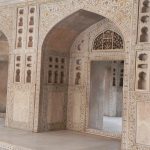 marble is dug from the ground, it is used immediately, and untreated. It is an ideal building material, because it retains its colour for years, and it is also strong and hardwearing.

Unusually, Makrana marble has only 2% of impurities – the other 98% are pure calcium carbonate. While it always has a brilliant shine, it’s not always entirely white – the marble can have grey or pink shades in it. The good news for builders of the future is that there are still approximately 55 million tons of Makrana marble within the area’s 400 mines.

The tale of the Taj Mahal is probably one of the most famous love stories in the world – a heartbroken king vows to build a beautiful white marble mausoleum for his wife, who dies tragically in childbirth, and to build himself a matching one in black.

The Taj Mahal (Crown of the Palace) was commissioned in 1632 by Emperor Shah Jahan following the death of his wife. Alongside the temple-shaped tomb, there is a guesthouse, mosque and formal gardens. It’s worth noting that Mumtaz Mahal wasn’t his only wife, but she was his favourite.

It took 20,000 artisan builders and craftsmen to complete the Taj Mahal, with the bulk of it finished in 1643. Bits and pieces were finished over next 10 years. Contemporary documents show that Jahan’s chief architect, Ustad-Ahmad Lahori, called in the best masons, carvers, stone-cutters and more from across the entire empire. 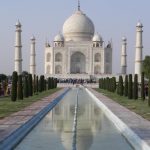 The design was inspired by both Mughal and Persian architecture in general, but Jahan had specific examples he liked, including the Baby Taj, which is the tomb of I’timād-ud-Daulah, Mumtaz’ grandfather, constructed between 1622 and 1628. This was made of red sandstone with the marble on top, whereas Jahan came up with the idea of building in marble and inlaying semi-precious stones into the blocks.

The dome at the top is 35 metres (115 feet high) and surrounded by four smaller domes, all of which are patterned with a lotus design. Below it are the minarets, used to call the faithful to prayer. There are all kinds of reliefs and carvings across the walls, including plants, vines and flowers.

Patterns are made from lapis lazuli, jade, agate, turquoise and coral, amongst others. These semi-precious stones are also used to decorate souvenirs, like the elephant. Over-enthusiastic visitors to the Taj Mahal have been known to take a knife to the walls in order to prise out the stones, which is why the innermost part of the tomb is actually cordoned off.

Any restoration works which need to be carried out are performed by the descendants of the original builders who constructed the tomb. The government is keen to ensure that they use traditional methods, and as such the techniques are handed down through the families.

Jantar Mantar is the term given to five observatories built by Maharajah Sawaii Jai Singh II of Jaipur between 1724 and 1730. These are astonishing to see, and yet many visitors to India don’t get to see them. The structures at the Jantar Mantar are all designed to take astronomical measurements, including the world’s largest stone sundial and a device to calculate the locations of the stars and planets.

The origins of the name of the observatories are also interesting. ‘Jantar’ seems to be a corruption of ‘Jantra’, itself 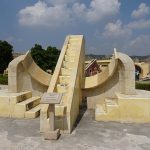 Jai Singh wanted to create instruments that would be more accurate than the brass ones used by his fellow scientists, and so constructed them on a huge scale from stone. The sundial is believed to tell the correct time to within two seconds.

Jai Singh also designed much of the city that bears his name – Jaipur – and was a good ruler, despite being only 12 years old when he ascended the throne. His interest in astronomy was encouraged by Pandit Jagannatha Samrat, who he met while on a campaign against the Marathas in around 1700.

The pair studied astronomy together, and Jai Singh eventually conceived of the massive observatories to enhance his learnings. He believed that the brass instruments used to produce the data included in the ancient texts on astronomy eventually lost accuracy due to use, and felt that his giant stone tools would be more precise. And he was right.