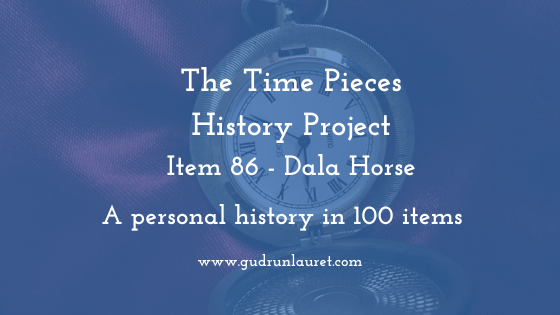 First time on the blog or new to the Time Pieces History Project? Find out what it’s all about here, and then come back to this page for today’s item – The Dala Horse.

The Dala Horse – Introduction to Item 86 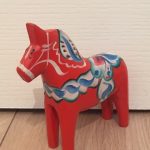 The Dala horse is the only item in this section that represents somewhere I’ve never been! While I’ve been to both Norway and Denmark, I’ve yet to get to Sweden. However, the horse is so significant to me that I hope I’m forgiven. I’ll get there one day and visit the factory where they’re made.

My dad worked abroad a lot when I was little, and did a spell in Stockholm. The little red Dala horse was a gift he brought back for me, and I loved it. I wasn’t very careful with it though, and managed to stand on it and snap off one of its legs (I’ve always been clumsy!)

If you look carefully, you can still see the join where he had to glue the leg back on (although you can’t see it in this photo!) Since then, the horse has spent most of its time on a mantlepiece, where it’s out of harm’s way!

The History of The Dala Horse

The Dala or Dalecarlian Horse is carved from pine, and originated in the province of Dalecarlia, now known as Dalarna. Today, these are found all over Sweden, although they were made at first, according to the World Heritage website, in the ‘Mora villages Vattnäs, Risa, Bergkarlås and Nusnäs.’

The horses can be in any colour, and have characteristics which represent the region they come from, although the red version, like mine, seems to be the most popular. Certainly, red was chosen as the paint for the world’s largest Dala horse, which is on display in Avesta. It’s made from concrete rather than wood, though.

While woodcarvers would have made horse toys for their children to play with at home in the log cabins, the commercial production of the Dala horse probably came about as a by-product of another type of craftsmanship – that of clock and furniture making. It’s thought that the wooden horses were available for sale as early as 1623.

The inhabitants of the four villages mentioned earlier mostly made their livings this way, and the left-over bits of 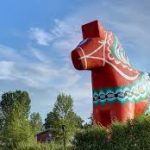 wood were collected up and made into horse figures. They were unpainted at first, although at the start of the 19th century they were painted white or red.

The more elaborate decoration, such as we see today in the bridle, saddle and mane, was inspired by the Dalecarlian tradition of painting elaborate scenes on the wooden furniture, and included people, buildings, plants and animals. This style of painting is known as ‘kurbits’ and is a made-up symbol of fertility, based on a biblical legend about a pumpkin.

As the 19th century wore on, the horses became important for bartering for food, grains and so on. As the country struggled, the Dala horses were a way for families to feed themselves, and the skills required for making the horses was passed down through the generations.

The horses began being painted in two colours when Stikå-Erik Hansson developed a technique of using one brush for both colours, and this is still used today. Teenage brothers Nils and Jannes Olsson began carving their own Dala horses in 1928, and the Olsson factory is one of the oldest in Sweden.

As I mentioned in blog 83, in 2007 I went to Australia on my working holiday visa, and spent some time in Adelaide. My boyfriend and I were a bit skint, so when we left South Australia for Victoria, we decided to save some money and do a bus trip rather than shell out for flights.

I found a company that did trips which included a spot of sightseeing instead of just ferrying passengers over the state line, so we booked that. We stopped for lunch and visited the Whispering Wall in the Barossa Valley. This is the retaining wall of the Barossa Reservoir, built between 1899 and 1903. 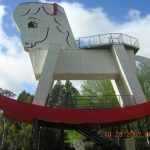 Today, it’s a tourist attraction thanks to the fact that its curved shape means that you can say something at one end and your words will be heard 100 metres away on the other side – we tested it, so it’s definitely true!

We also stopped at Gumeracha, in the Adelaide Hills, home to a wooden toy factory and the Big Rocking Horse. Made of steel and towering 18 metres high, it dwarfs (unsurprisingly) its tiny replica far below it. The Horse took eight months to build, weighs 25 tonnes and cost $100,000 (presumably AUD).

I was fascinated and bewildered by this, and wanted to know more, especially after passing the ‘public purse’ on Bourke Street Mall in Melbourne several times a week. The ‘big things of Australia’ number over 150, and are found in every territory and stage. Many are situated on main roads and entertain tourists, such as Larry the Lobster (South Australia) that we saw in 2015.

Others can be representative of an area and its industry, such as the big blade in Snowtown, South Australia, which is modelled on the blade of a wind turbine, or the Big Earthworm in Victoria, which represents the endangered giant Gippsland earthworm.

Some are heritage-listed, and some are considered folk art. While many are just sculptures, there are others which are interactive, such as the guitar, or the Big Cheese in New South Wales, which has a diner and gift shop inside it. New South Wales also has the world’s largest playable guitar, which is six metres long and stands outside Narrandera’s visitors’ centre. Narrandera is very rural, but also home to a Moth Museum and an original courthouse.

I also have a recollection of seeing one of the ‘big rams’ as we left Western Australia in 2007, which is outside of a shop in Wagin. This ram is not as large as its counterpart in NSW, but it is anatomically correct… It’s my ambition one day to visit and document all of these large attractions, so perhaps that’s a project for after this one. Once lockdown has been lifted!

The Swedish Chef, of course, is not Swedish at all, and plays on a few stereotypes that are probably offensive by today’s standards. However, he does have a bit of a history, as well as a reputation for smashing up kitchens and getting himself into scrapes.

He was introduced to The Muppet Show in 1975, with Jim Henson providing the voice and operating his head, and Frank Oz as his hands. The Chef is humanoid, which is why he has real hands. He speaks a nonsense language which the Swedes say is more like Norwegian than Swedish, and his catchphrase is ‘bork, bork, bork.’

The Swedish Chef was intended to be a parody of television chefs, not necessarily of either Swedes in general or Swedish chefs in particular. Henson’s son Brian says that his dad had a cassette of ‘How to Speak Mock Swedish’ and he would pretend to be cooking. Co-writer Jerry Juhl backs up this claim, saying that the character didn’t have a real-life inspiration behind it.

Nevertheless, a couple of chefs have claimed to be Chef’s human counterpart, including Friedman Paul Erhardt (also 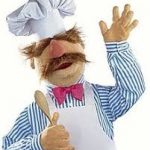 known as Chef Tell) who was one of the first TV chefs to become famous. However, Erhardt is German-American, although his accent was thick and sometimes hard to understand.

Swedish chef Lars “Kuprik” Bäckman cites his disastrous early appearance on American breakfast TV, where he was so nervous he started to stammer and couldn’t speak properly, causing the audience to. hoot with laughter. He says Jim Henson bought the rights to that episode, and based the Swedish Chef on him. Interestingly, Bäckman’s youthful tones are heavily ‘Dalecarlian’, meaning that he’s from the same place as the famous horses.

On YouTube, the Chef has his own cooking show, which is as chaotic as his appearances on The Muppets. He also does a hilarious cover of Hot Butter’s synth-pop hit, which he’s called Pöpcørn. I recommend you check it out next time you have a bad day. Best not to follow his methods, though.

Visit World Heritage: The Story of the Dala Horse
Australian Explorer: Australian Big Icons
The Atlantic: Everything we Thought we Knew About the Swedish Chef is Wrong