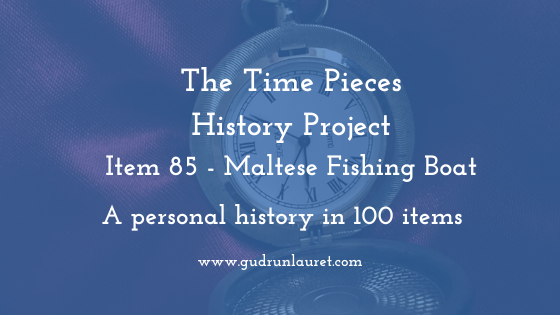 First time on the blog or new to the Time Pieces History Project? Find out what it’s all about here, and then come back to this page for today’s item – the Maltese Fishing Boat. 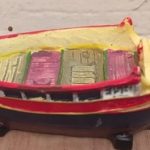 Malta wasn’t somewhere that was even on my radar until a few years ago, until a friend said she wanted to go there for her 30th birthday. We thought it sounded like fun, so we decided to spend a couple of days there on our own before the others arrived. The little fishing boats that this souvenir is modelled on dot the harbours as you go around.

We’ve now been to Malta four times in the space of a couple of years – stopping off there after a trip to Greece and twice for poker tournaments. Those are fun trips because the prize package includes a stay at a swish hotel and parties every night.

Malta is a beautiful little island, with warm weather almost the entire year round, plenty of restaurants, cafes and bars, and the food is amazing. Because it’s an island, you’re always within a couple of minutes of the water, and you can even take a ferry to the capital, Valletta. And of course, it has a rich and varied history.

The History of The Maltese Fishing Boat

The small, brightly-coloured boats are called dgħajsa and became popular only at the start of the 20th century, although they are based on a 19th century design. They were used for transporting people, but became popular as fishing vessels when motors were added.

The larger versions are known as luzzu (plural luzzijiet), and some are used to ferry tourists around, although the few hundred still in service are used by fishermen. More modern boats have cabins and decks. Sadly, no new luzzu or dgħajsa are built these days.

The luzzu is based on a Sicilian boat known as the ‘guzzu’ (from the Italian ‘gozzo’) and these would visit the Maltese islands in the late 1800s, carrying both tourists and fishermen, and which were equipped with oars. Today, you can do a day trip to Sicily from Malta, a distance of 118 miles (91 km). I wouldn’t fancy rowing that!

The luzzu are flat-bottomed with a pointed bow, made from ash and red deal wood inside, and white deal outside. 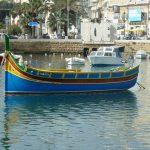 The colours used are always red, yellow, blue and green, although patterns vary. The moustaches (mustaċċi) are the triangles on the bows, and used to be in different colours to show which village the luzzu was from.

The moustaches all feature a pair of eyes, which are known as the Eye of Horus (the Egyptian sky god) or the Eye of Osiris (the god of the dead), and protect the fishermen at sea. This is thought to be a leftover custom from the Phoenicians. The Maltese fishermen are leaving nothing to chance, as they also hang olive branches from the front of the boats that have been blessed in church on Palm Sunday.

The dgħajsa is thought to be based on a ferilla used from the 17th to the start of the 20th century, again as a fishing or passenger vessel. These could venture further out to sea, and were larger, although prone to attacks from Barbary pirates.

The History of Malta

Malta was first inhabited by farmers in 5900BC, who damaged the soil to the point where the islands were uninhabitable. In 3850BC, its new occupants built Megalithic Temples, amongst the oldest buildings in the world. After that civilisation collapsed in 2350BC, it was replaced by Bronze Age warriors.

Malta has a long history of being colonised, or occupied might be a better term, by powerful nations. The Phoenicians got there first, and introduced the concept of the Evil Eye symbol. They were defeated in 218BC by the Romans, who were in charge until the 6th century AD, when the Byzantines took over.

They in turn were defeated by Aghlabids (also Arabs) in 870, and the island got a bit of a break until the Arabs arrived in the 11th century, followed by the County of Sicily (under Norman control) in 1091, the Swabians (what is now south west Germany), Aragonese (Aragon and Barcelona, which made a vast kingdom covering a huge part of Europe) and the Spanish.

The Knights Hospitaller did a good job of looking after the country, and architecture, arts and society all flourished. The French briefly occupied it in 1798, but the British got rid of them in 1800. It became an independent colony in 1964 and a republic 10 years later. 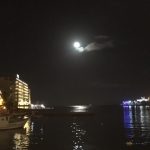 Malta is full of contrasting examples of the many countries and kingdoms that colonised it. The national language is similar to Arabic, but with Italian inflections thanks to the influence of nearby Sicily. Many of the place names, including former capital city Mdina, are Arabic, and the architecture of the city matches the eclectic style of the language.

Unusually for an island (OK, not that unusual, as our national dish is either roast beef or fish and chips), Malta’s national dish is not fish, but rabbit, and very good it is too. It normally comes in stew form, known as stuffat tal-fenek.

It’s thought that this came about because the Knights had restrictions on hunting which weren’t lifted until the 18th century – eating rabbits was symbolic resistance. Likewise, the consumption of pork in the islands was a rebellious gesture to its Arab rulers.

Although fish is not the national dish, they do it very well, and seafood is often found on Italian restaurant menus. I’d also highly recommend trying one of the platters – a mix of cooked meat, traditional Maltese sausage, water biscuits, bigilla (broad bean dip and Ġbejna (literally, ‘little cheese’) which is made from goat milk and comes in three forms. The pickled version is immense.

Malta’s stunning capital city stands on Mount Sceberras (Xaghret Mewwija), between two harbours. For centuries, it was empty apart from a small watchtower at its far end, known as St Elmo. It wasn’t until the Knights Hospitaller took an interest in it in 1565 that it was considered to be worth inhabiting.

Long before this, a hospital was founded in Jerusalem to care for poor and sick pilgrims who came into the city, started by merchants from Amalfi in the 11th century. A monk called Gerard began founding hostels along the route to the Holy Land after the First Crusade saw Jerusalem conquered by the Christians in 1099. In 1113, a Pope Paschal II issued a papal bull that saw the monks formally recognised, and a few years later they adopted the Benedictine style of running the order.

The Order has been known by several different names since then, with the Knights of Malta being an official name since 1961. While their primary concern was caring for those who were unwell or unable to care for themselves, they were also a military order, which meant that they could and did fight.

Over the centuries since their founding, the Hospitallers had covered the globe, moving from Jerusalem after it was 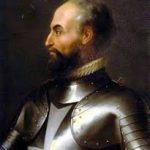 recaptured in 1187. They spent time in Cyprus and then Rhodes, where they robustly defended the Mediterranean from Muslim ships.

However, in 1522, Turkish ruler Suleiman the Magnificent finally managed to drive them out of Rhodes. In 1530 Holy Roman Emperor Charles V granted them Malta, provided that they would give a falcon every year to his viceroy in Sicily. This odd-sounding practice was actually a great honour for the viceroy, as Maltese falcons were highly prized. Sadly, the film of the same name has nothing to do with actual birds.

Suleiman wasn’t too keen on the Knights pitching up somewhere new, and in 1565 decided to follow them to Malta and fight them for it. The battle was hard-fought, but the Knights Hospitaller were the ultimate victors, in no small part down to the tactics of Jean Parisot de la Valette, the grand master (head) of the order.

He decided to build a fortress, and chose Mount Sceberras as a good place. With financial backing from both King Philip II of Spain and Pope Pius V, work began in 1566, although the grand master died before it was completed. Valletta, of course, is named after him. The Knights moved there in 1571, and over the centuries it flourished, taking over the position of capital city from Mdina at the end of the 16th century. Valletta came under siege again during the Second World War, but survived the bombing.