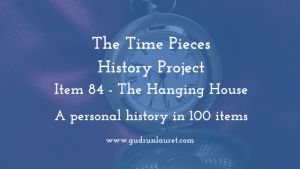 First time on the blog or new to the Time Pieces History Project? Find out what it’s all about here, and then come back to this page for today’s item – The Hanging House.

The Hanging House – Introduction to Item 84 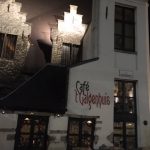 My younger brother has lived in Ghent, Belgium, for about 12 years, and I’ve lost count of how many times we’ve visited him over there. The city has a university and a music conservatory, and in the last 30 years or so has become a lot more popular with tourists. They have a huge annual festival with music, street performance and more, which takes over the streets for 10 days.

However, we’ve been visiting Belgium for longer than 12 years. My dad was also a student there, so we’ve gone over many times to visit friends and explore the area. The museums and galleries are fantastic, and of course Belgium is famous for beers, chocolate and chips with mayonnaise, all of which I highly recommend!

The History of The Hanging House

‘Het Galgenhuisje’ or ‘The Little Hanging House’ was originally two small fish warehouses, built on the corner of the street beside the 15th century slaughterhouse and meat market in the centre of Ghent.

The city records for the year 1579/1580 show that one Clas Arents requested permission to build a little house between the gallows and the slaughterhouse, which seems like a peculiar place to put a home. Nevertheless, Clas was granted permission and started work.

The gallows which give the pub its name stood in the square in the Middle Ages, just next to the stocks where 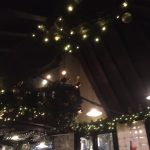 naughty criminals could be ‘exhibited’ to set an example to others. The shackles from the stocks were stored behind the house, and marks from other equipment can still be seen today. I’m still not sure why anyone would want to live there…

It’s thought that the building was being used as a tavern by the end of the 1600s, and in 1713 Rogier Bogaert took it on, saying that the buildings were old and of no use to anyone. It was taken over again in 1725, and the landlord lived onsite. The cellar wasn’t put in until 1748, and ran under the meat market.

It wasn’t until 1783 that Hendrik de Vyer combined the two buildings, and the original hanging house remains in the lower part of the building. The pub now has three storeys, with a tiny balcony above and the toilets and a small room in the former cellar. There is also seating outside, which is popular in summer.

Disappointingly, there is no evidence that any criminals stopped at the tavern for a last drink on their way to the gallows. Likewise, the Last Drop on Edinburgh’s Grassmarket is close to the former gallows site, and the rumour is that it was where the condemned were taken for their last meal, which is possible. Of course, the Grassmarket is full of pubs, so any of them could have been chosen. A ghost is reported to haunt the cellar, but it’s a small girl, not an adult.

So, there was no guarantee you’d get a last drink for the road, but you probably would get a meal. The last meal, euphemistically referred to as a ‘special meal’ within prisons, is a privilege, not a law, although one that has been around for centuries.

At the Last Drop, which probably wasn’t called that then, criminals were given a meal while the gallows were being built, and handed a shot of whiskey just before they left. There’s no information readily available about what that meal would have been, but I hope they got haggis, neeps and tatties (bear in mind that in the Middle Ages people were executed for stealing bread, clothes or animals, or just for being the wrong religion). 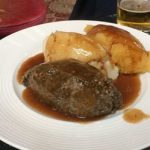 The last meal has been compared to Christ’s Last Supper, particularly with his decision to break bread with Judas Iscariot, even though he knew Judas had betrayed him. The meal is thought to be a symbol of the prisoner making peace with their executioner.

It was also thought that giving the condemned a good, square meal would keep them happy on their journey to the afterlife and keep their spirits happy (literally). Poor-quality meals and stingy portions would anger the ghost of the recently-executed, who would then be obliged to haunt whoever put them to death.

Apparently, those facing the firing squad are offered a final cigarette, which is fine so long as you usually smoke, and one British hangman recommended an entire cup of brandy. Some last meals can be elaborate, multi-course affairs, but others may depend on how much the prison authorities have budgeted per execution meal. Sometimes the condemned shares their last meal with a friend, or they order enough puddings so that everyone on death row can have something.

In modern times, prisoners have been allowed to ask for fast food, with KFC a popular choice. A Victorian murderer was given eggs and bacon, and wine or something stronger is often granted too – even a full bottle of wine. A German serial killer in the 1930s asked for double helpings and got it, and others choose fine dining. Texas no longer offers a last meal, when a prisoner in 2011 ordered a huge range of dishes but didn’t touch any of it, claiming not to be hungry.

The Altarpiece, on display in the Cathedral of St Bavo (St Baaf in Dutch) was commissioned by the 15th century warden of the church, Joos Vijd and completed in 1432 by the van Eyck brothers, Hubert and Jan. a portrait of Viijd and his wife, Elisabeth Borluut, was done at the same time.

Constructed of 18 oak panels, the most eye-catching part is at the bottom and right in the centre, depicting a scene entitled ‘Adoration of the Mystic Lamb (Het Lam Gods). The Lamb, representing Christ, is positioned on a platform, flanked by angels and with the Holy Spirit, represented by a dove, above its head.

The painting is full of religious imagery, although van Eyck (it’s thought that much of the work was done by elder brother Hubert, with Jan finishing it off after his death) has put in a great deal of realistic touches into the grass and plants.

Golden light bathes the scene, and the figures adoring the lamb include Adam and Eve. In the separate panels above, 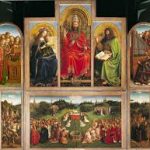 a crowned man sits on a throne, representing God, and the nude figures at either side are John the Baptist and The Virgin Mary.

For many years, the original Altarpiece was in the basement of the Cathedral, and people would pay to see it when it was open. A replica on the main floor draws almost as much attention, which is not surprising, as the central image is striking.

The Lamb, with a golden halo of rays around its head, has been pierced through the chest, and its blood collects in a strategically-placed goblet below. In the 1550s, the van Eycks’ lamb was painted over, but it was recently restored to its original form.

Many viewers were astonished to see it had a far more human face. Much was made of the eyes, but to me the mouth looks weirdly human. What has been particularly surprising is that this style is not representative of other works of the time, including by the van Eycks. The Altarpiece went back on display in January 2020, and Ghent will celebrate Jan van Eyck throughout the year.

Information about the history of the Hanging House from the pub menu
History is Now: The History of the Last Meal
Visit Gent: The Ghent Altarpiece