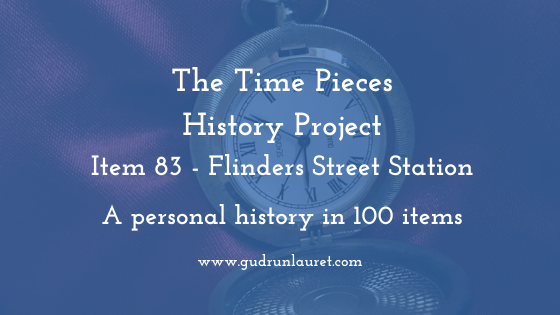 First time on the blog or new to the Time Pieces History Project? Find out what it’s all about here, and then come back to this page for today’s item – Flinders Street Station. 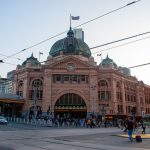 I graduated from university in 2007, and in the summer of that year my then-boyfriend and I went to Australia on our working holiday visas. We spent a few months in Perth, WA, and six weeks in Adelaide, SA, before arriving in Melbourne in Victoria.

We found ourselves in a hostel in the city, right over the road from the huge and impressive Flinders Street Station, busy with commuters, students and other travellers all day, every day. We used to go to a bar on the opposite corner, Young and Jacksons, and sit and watch the world go by. When we went out to explore the wider area, we always came back to the hostel via Flinders.

Although York feels more like home than anywhere else, Melbourne comes a very close second. We ended up living there for six months, although we didn’t stay in the hostel the whole time. I’ve been back since, to the same bar, and I was delighted to be back. If I could, I’d seriously consider emigrating and living in Victoria.

The History of Flinders St Station

Flinders Station sits on the corner of Flinders Street and Swanson Street, and was the first railway station in an Australian city. Other records it hold are: the longest platform in the country (708 metres long) and the fourth longest in the world; two of the city’s busiest pedestrian crossings, and the world’s busiest station in the 1920s.

In 1854, Melbourne Terminus was opened to steam trains, with the first steam trip in the country happening on that 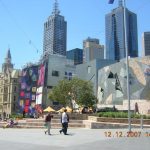 Fed Square, on the site of the old Princes Bridge Station

first day. A second platform was added in 1877 and a telegraph station followed two years later.

On the site of Federation Square today, there was another station – Princes Bridge – which seems a bit odd as Fed Square is straight over the road from Flinders. It closed briefly from 1865 to 1879, but was eventually subsumed into the bigger station.

The government decided that a new station was required in 1882, but it took them 17 years to ask for submissions. In 1899, the winner was chosen, which included a clock tower and a domed entrance, and work began the following year.

In 1904, as building was still ongoing, it was decided that it should be four storeys high, and much of it was constructed in red brick. On the south side, the exterior was painted to look like brick. Work went on for several years and the station officially opened in 1910.

In the 20th century, the building was home to a ballroom, restaurants, shops and a library, and later a creche and rooftop play area (yes, really). Renovation works have taken place over recent decades, including repainting the exterior in the soft yellow shade we see today. The row of clocks above the entrance remain, as does the staircase beneath them.

So, why is the street and the station that sits on it called ‘Flinders’? They’re named after British navy captain Matthew Flinders, who played a significant part in the founding of the modern Australian nation. Flinders was in charge of the second circumnavigation of New Holland and confirmed that it was a continent, a task which followed on from Abel Tasman’s trip in 1642. New Holland was renamed Terra Australis by Flinders.

Matthew Flinders joined the navy aged 15 in 1789, and worked his way up to the position of commander in 1801. His first trip to New Holland was in 1791, and he went again in 1795, taking the newly-appointed governor of New South Wales out to start his job. He did a lot of investigating the surrounding area, including bays, rivers and Van Diemen’s Land (Tasmania). 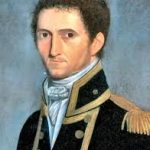 He began the second exploration of Australia and its coastline in 1801, when he took the ship ‘Investigator’ along the south of the country. Having surveyed that, he stopped briefly at Oyster Bay, Western Australia (WA), had a quick chat with a French explorer (naming their meeting place Encounter Bay, which was very imaginative) and then popping round to Port Phillip in what would become the state of Victoria.

In 1802, The ‘Investigator’ was in a bad state of repair, forcing Flinders to abandon it a year later in Sydney. Although he wanted to continue his explorations, he couldn’t find himself a replacement ship, so he booked passage for himself back to England, where his new bride was waiting for him.

Unfortunately, 700 miles out to sea from Sydney the ‘HMS Porpoise’ was shipwrecked. Flinders took its small cutter (single-masted boat) back to Sydney and sent help back to the other survivors. He then commanded the ‘HMS Cumberland’ but still didn’t get much further back towards home.

At the end of 1803, he had to dock the damaged ‘Cumberland’ at Il de France (Mauritius) to try to have it repaired. England was at war with France at this time, and despite Flinders holding a French passport and being abroad on scientific work, he was taken captive and held until 1809.

Finally returning home in 1810, he was in poor health but began work on his book, ‘A Voyage to Terra Australis’, which was originally published under a far longer and less catchy title. In it, Flinders recounted his discoveries and travels, alongside a map of the continent.

By the time the book was published in July 1814, Flinders was extremely sick with the kidney infection which would ultimately kill him. He was unable to read or even see his book, but his wife brought copies to his deathbed so he could at least touch them. He died a few days after this at the young age of 40.

St Kilda, named after a boat docked there in the 1840s (The Lady of St Kilda, clearly named itself for the isolated Scottish archipelago) is a beachside suburb of Melbourne and a cool, bohemian, arty place to visit. When we lived in Chadstone, we used to get the tram along to St Kilda at the weekend to visit the beach, markets and bars.

It’s thought that the sandstone cliffs by the beach were good to sharpen axes on, and remains of huts and shellfish 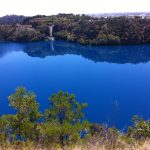 middens (rubbish dumps) have been found thought to date back to around 31,000 to 40,000 years ago. It was first settled by a European a long time later – Benjamin Baxter came from Melbourne to use the land for grazing (animals, I assume, not his family!) in 1839.

At the end of 1842, former captain of the Lady of St Kilda, James Ross Lawrence, bought up a section of land in what would become the village of St Kilda, and it quickly became fashionable with the wealthy Victorian Victorians (think about it!) who liked the cool breeze, the private salt baths and bowling clubs.

Mansions sprang up during the land boom of the 1880s, along with luxurious hotels, villas and lush gardens. Sadly, this was quickly followed by a bank crash, so in the 1890s these big buildings became hotels.

In 1906, the St Kilda Foreshore Committee was founded to revamp the neglected area. Local Carlo Catani designed promenades, parks and gardens along the front, and the committee licenced the St Kilda Sea Baths (1910), The Palais Theatre (1927) and Luna Park, which opened in 1912 and is still operational today; as is its sister park in Sydney.

There were new shops, cafés, restaurants and apartments springing up, and those, combined with cinemas, dancehalls and late-night amusement arcades, made it popular with young singles. Unfortunately, the Great Depression led to a lot of social problems. There was a decline after the second world war, but St Kilda picked up again in the late 1980s, and today is bustling and flourishing.