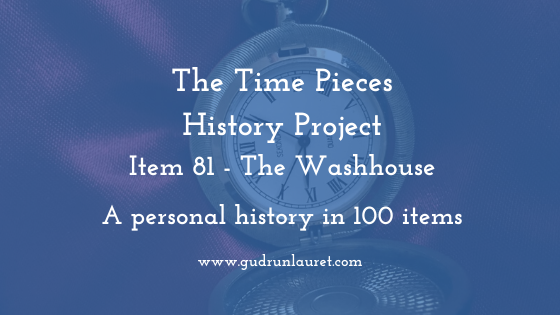 First time on the blog or new to the Time Pieces History Project? Find out what it’s all about here, and then come back to this page for today’s item – the washhouse.

The Washhouse – Introduction to Item 81 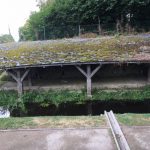 As a family, we’ve been visiting Brittany in the North West of France for over 20 years, although we’ve still only explored a tiny part of it. We have a house in the middle of farming country, so it’s very quiet and peaceful. They’re keen on promoting their medieval heritage here, and there are festivals to celebrate that every year.

Many of the buildings still retain the original features, and effort is made to restore or preserve places of historical importance. This might be the walled gardens in Vannes, the churches in every town and village, or the humble washhouse.

The first washhouse I remember seeing is the one in our nearest town, Josselin. It sits beside the canal and is tucked down a little slope. It’s so unassuming that you could miss it, but once you notice the distinctive flat roof and wooden support struts, you spot them everywhere. There’s a large one in Vannes (within the walls) that has been renovated so you can walk through it.

The History of The Washhouse

The washhouse, or lavoir in French, date from the 15th century up to around the 19th century. The roofs are usually slate, and were built beside free-flowing water, with the washing done on stone slabs.

In Josselin, the washhouse is set a little away from the Nantes-Brest Canal, although there is evidence of a small 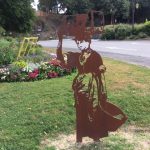 stream, probably an offshoot of the canal. In Vannes, it sits right on the edge of the water (the river Marle), and there is a building on top of it.

Vannes was the former home of the Dukes of Brittany, and the stunning gardens were once the grounds of the family castle. In the 17th century, these were opened as a public esplanade. The path that runs through is known as the Garenne. The washhouse was built below the battlements, although it’s not as old as it looks – work on it took place between 1817 and 1821. A great deal of washerwomen would have used the space.

The battlements themselves were first built 1,500 years ago when the end of the Roman Empire meant that Vannes (then called ‘Darioritum’) needed to defend itself. A fortified ‘castrum’ was built, and in the 13th century this was extended when one of the Dukes doubled the size of the town. They were reinforced in the 15th century, and the Garenne part of the fortification was built between 1626 and 1628. 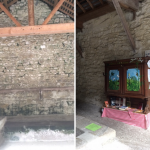 The washhouse in Josselin, however, IS as old as it looks, dating back to the 16th century. It sits at the base of a chateau which is over 500 years old itself, and is still the family seat to the Duc du Rohan. The castle is open to visitors during the summer.

Of course, nobody washes their clothes in rivers or canals these days, and being a washerwoman is no longer a career option. While many of the washhouses are now tourist attractions, like those in Vannes and Josselin, others have been repurposed. In Dinan, midway down the (incredibly) steep down to the marina, a former washhouse now houses a tiny free library.

The medieval town of Josselin, with its beautiful square, bustling weekly market and half-timbered houses is possibly even older than most people realise. In the 4th century, Saint Meriasek (or Meriadeg in Breton) is believed to have founded a chapel at the present site of the town. 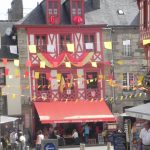 Meriasek sounds like quite an interesting bloke. From a wealthy family, he was earmarked for a political marriage but declined the offer and became a priest instead. He then cured people of things such as disability and leprosy.

He spent time in Cornwall but was persecuted by a local king, which led him to return to Brittany. In Josselin, he got rid off a gang of highwaymen through prayer, caused water to run from a rock, and brought the ‘fire of heaven’ down on brigands plaguing the area. He became Bishop of Vannes, and is buried in the Cathedral there.

In 1351, a battle took place between a group of Franco-Breton knights (from Josselin) and English knights (garrisoned at nearby Ploermel). The organised fight, instigated by the French side, occurred midway between the two towns, and they ultimately won.

Now known and commemorated as the ‘Combat of the Thirty’, the combat was one of many that happened during the Breton War of Succession, itself part of the Hundred Years War. This somewhat complicated disagreement between two counts was to try to gain control of the Duchy of Brittany, and lasted from 1341 to 1365.

Josselin is also noted for its basilica, the Notre-Dame du Roncier, which was built in the 12th century, although little of the original building remains. Enlargement works were carried out in the following century, and at the end of the 14th century a private chapel and oratory were added for one of the local lords. More work was carried out in the following 500 years, with a tower added, a new nave and another chapel. Pope Leo XIII made it a minor basilica in 1891, recognising the quality of its architecture.

There is a legend that back in 808, a peasant found a statue of the Virgin Mary in a bramble bush (‘roncier’ in French) and took it home with him. However, every time he did so, it disappeared from the house and made its way back to the bush. Eventually, he decided to found a chapel, and the present church was built on top. As with St Meriasek’s chapel, miracles of healing have been attributed to the basilica.

The Duchy of Brittany

The Duchy of Brittany covered a large part of the Northern Peninsula, and began in around 939, lasting until 1547; it was first established after the Viking raiders left France. Brittany is close to Normandy, which meant that it was often necessary for the two Duchies to work together, although on occasion they were at war.

In the 12th century, Henry II invaded Brittany and made himself Count of Nantes in 1158. This rule passed down through Henry’s son Geoffrey, although control only lasted until 1204. From then on, Brittany was more or less under the control of the French crown, with monasteries, backed by the aristocracy, springing up throughout the region. The Breton War of Succession, as we’ve seen, was quite disruptive, not to mention protracted. It was ultimately won by John of Montfort, who became Duke of Brittany. 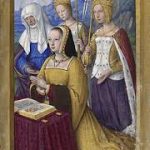 In 1488, Francis II, the last Duke, died, and his title passed to his daughter Anne. Anne was married at the time of her father’s death, but King Charles VIII decided to get involved – her marriage was annulled and she was obliged to marry Charles.

Duchesse Anne is still honoured in Brittany, and she even has a beer, made at the local brasserie, named after her. Her second marriage meant that the King was now the Duke of Brittany, and it merged with the crown. After the French Revolution, the duchy was replaced by the department system still in place today.