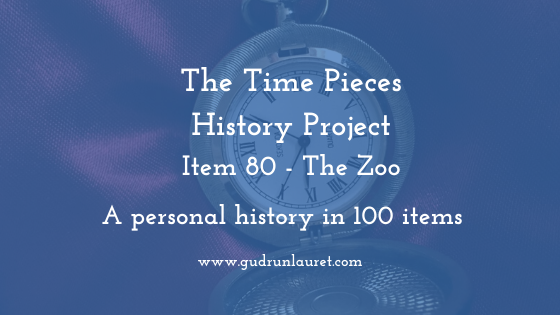 First time on the blog or new to the Time Pieces History Project? Find out what it’s all about here, and then come back to this page for today’s item – the zoo.

The Zoo – Introduction to Item 80 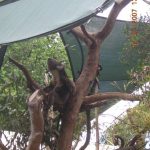 Zoos, like circuses, are somewhat controversial these days, although the few I’ve visited give the animals plenty of room. In terms of conservation and survival of a species, zoos are often the best way for this to happen, although welfare always has to be top of the list.

I’ve never been to Edinburgh Zoo, but I did visit the one in Amsterdam when I was tiny. I went to Adelaide Zoo on my first trip to Australia and loved it, although the Tasmanian devil seemed distressed. The second time, I went to Australia Zoo (brainchild of the late Steve Irwin) and was amazed.

The park is vast and sprawling, and there are little trains to take you from ‘Africa’ to ‘Asia’. The animals have lots of space to move around, and the keepers clearly care for their charges. We watched a blind tiger swimming, went to a dolphin show and saw crocodiles and alligators that were 60 years old and caught by Steve Irwin’s dad.

The History of The Zoo

‘Zoo’ is short for ‘zoological garden’ and comes from the Greek words ‘zoon’ (‘animal’) and ‘logia’ (‘study of’). The London Zoological Gardens opened in 1828 and was the first place to use the abbreviated word. Modern zoos are accessible to the public, and the London Gardens opened its gates in 1857. Prior to that, they were for study, research and breeding.

Before zoos, menageries – collections of exotic or interesting animals – were popular. Often royalty and the extremely wealthy had these as private collections, but in later centuries they did tour for the education of the public.

A menagerie dating back to around 3500BC was found in Egypt during a dig at Hierakonpolis, where remains of elephant and hippopotami were found, amongst others. Examples have also been found from the 11th century BC and belonging to the Middle Assyrian Empire, and the 2nd century BC in China, where Empress Tanki had a house of deer.

Zoos were found in Ancient Greece and then Ancient Rome, where they were often unfortunately obliged to fight in 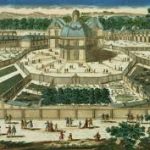 The menagerie at Versailles

arenas for the amusement of the citizens. By the time of Charlemagne’s Holy Roman Empire in the 8th century, animals from all over the world were commonly given as gifts, and he was sent elephants from Asia and Africa.

Even William the Conqueror had a menagerie, and they became increasingly popular. In 1204, King John I had one in the Tower of London, and in 1235 Frederick II, the Holy Roman Emperor, sent three leopards (surely four would have been better?) to Henry III as a wedding gift in 1235.

Over in Tenochtitlan, Moctezuma, emperor of the Aztecs, had a huge collection in a ‘house of animals’. Hernan Cortes, the Spanish conqueror, saw it in 1520, and when the Aztecs revolted he had it destroyed. In France, animal fights were a menagerie in the 1500s, and a century later Versailles had one too. Although as this one was set up opposite a guesthouse, I don’t imagine Louis XIV wanted to put visitors off their breakfasts by staging fights!

What we think of as a zoo today began in the 1700s, in the Age of Enlightenment, when reason, logic and science were considered essential to society. For scientists to have a better understanding of animal behaviour, it was necessary to keep them somewhere that was as similar as possible to their natural habitat.

The problem with this was that the animals were often crammed into tiny spaces, bringing them into closer proximity with hunters and other foe than they might have been in the wild. The Menagerie du Jardin des Plantes, built in 1793, was one such example, more like a museum than anything else. 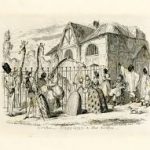 The Zoological Society of London was founded in 1826, and its president, Sir Thomas Stamford Raffles said the animals were to be “objects of scientific research, not of vulgar admiration.” For this reason, it was closed to the public for many years, accessible only to scholars.

This was all well and good, but most of the exotic animals were from warmer countries than London, and did not thrive in the cold and damp. Monkeys died from lung infections, and kangaroos tried to kill themselves by headbutting the fences (one succeeded). The animals at London Zoo were donated from private menageries or imported by ships’ captains, who kept the creatures in the hold for months on end, just as they did with passenger luggage.

A young veterinarian, Charles Spooner, was given responsibility for animal welfare, despite only spending eight months at college. With limited medical supply stocks, he was sacked for the high death rates of the animals. Spooner later became a professor at veterinary college and championed anaesthesia during animal surgery.

It’s hardly surprising, then, that scientists and scholars would not have learned everything they wanted to at the zoo. While it would have given them the opportunity to observe the animals in a (poor) approximation of their natural habitat, they wouldn’t have discovered much about their anatomy. Fortunately, there was a technique that was becoming increasingly popular.

Any animal (and clearly, there were many) that the unfortunate Spooner was unable to save was passed to his colleague John Gould, chief animal preserver at London Zoo. His work allowed the sad residents to be kept for posterity – and study. Another benefit of taxidermy in the Victorian era was that it gave the general public, denied entry to the zoo, the opportunity to see up close some of the animals from all over the world.

Indeed, as public interest grew, it became necessary to ensure that as many people as possible got to see something new. For the 1851 Great Exhibition, part of the appeal was to celebrate the British Empire and the lands it had conquered.

For example, a large display of Indian artefacts was set up. Pride of place was an elephant with a ‘howdah’ (covered platform) on its back. Unfortunately, it was too short notice to find an Indian elephant, so visitors had to make do with an African elephant. Of course, they didn’t know the difference anyway, so were none the wiser.

Stuffed animals also had pride of place on the walls, mantlepieces and halls of the homes of the wealthy, and Queen Victoria herself had a decent collection of birds. These were often displayed in ‘lifelike’ situations – the animals posed as if frozen in flight or running across the savannah.

One of the best-known proponents of taxidermy was John Hancock. An English ornithologist, he shot birds to mount himself. His contribution to the Great Exhibition was much admired, and inspired the taxidermy craze. One use of the technique was to preserve dead pets.

As always, though, the Victorians had to take it one step further, and towards the end of the era ‘anthropomorphic 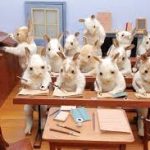 taxidermy’ was all the rage. Walter Potter is probably the most famous of this peculiar hobby, who crafted a charming little scene to show ‘The Death and Burial of Cock Robin’. It seems particularly gruesome to stage a funeral for a bird that’s already dead, filled with equally-dead mourners.

He also created tea parties for kittens, a rabbit school and criminal rats having their den raided. As if all that wasn’t bad enough, he’d include four-legged chickens and two-headed lambs, just for variety. Nevertheless, his museum was extremely popular.