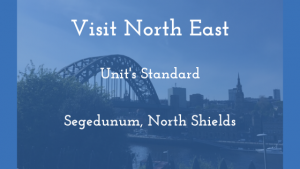 The Roman fort at Segedunum has an amazing collection of army uniforms and equipment, along with statues, busts and replica buildings. The legion’s standard display though, is particularly eye-catching, and I was interested to learn more about them. There isn’t a specific ‘Visit North East’ blog to accompany this post, as Segedunum was included in my Time Pieces History Project. You can read that blog here. 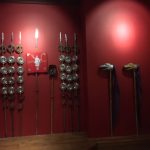 We learn from the display board that the standards, which represented the spirit of the unit and as such were a physical as well as spiritual symbol, were kept in a room known as the shrine. The shrine was located in the headquarters at the centre of the fort.

The standards had to be kept safe during peacetimes as well as in warfare, and the loss or capture of the standard meant disgrace to the unit. As the headquarters building served as the “administrative and ceremonial centre of the fort”, the shrine was the most important room within it.

The standards or ensigns were vital to the soldiers. While marching, they were at the front of the unit, and in battle they stayed at the rear. The standards (flags) were carried by bearers who wore uniforms with an animal skin over the top, often of wolf or bear.

Standards sometimes had SPQR written on them, an abbreviation of ‘Senatus populusque romanus’ – ‘the Senate and people of Rome.’ The standard bearers were often accompanied by horn blowers and trumpeters, and the combination of these made it easy to signal to the units.

The Design of the Standards

As we can see in the picture, the standards are made up of discs (‘philarae’) and other symbols – in this case spear points and crescents at the bottom. The signum (standard) was unique to the unit and the shapes used on them often had astrological meaning.

There were various types of standard, some bigger than others, but they were designed to be easily spotted by the 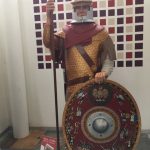 soldiers. The eagle standard, or Aquila, represented the god Jupiter and was the most important of all the symbols. It was carried by a senior officer (the ‘Aquilifer’).

Signa militaria were used from the beginning of Rome and originally they were made of a handful of straw attached to a spear. A handful was known as a ‘maniple’, and the soldiers within the company represented by each standard was a ‘manipulus.’ Later on, the standards used animal figures – the horse, the minotaur, the wolf or the boar. Either of these latter two creatures are probably on the staffs beside the taller standards.