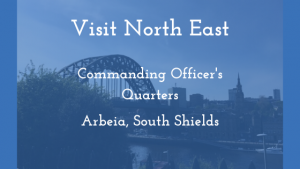 Initially I was going to focus on one specific item from the commanding officer’s quarters – his desk – but there are so many amazing things on display that I thought I’d give an overview of the most luxurious part of the Arbeia barracks. There isn’t a specific ‘Visit North East’ blog to accompany this post, as Arbeia was included in my Time Pieces History Project. You can read that blog here.

The History of the Commanding Officer’s Quarters 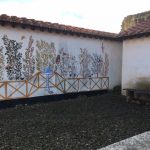 The officers came to the North of England with their families, and would have stayed for a couple of years. While the officer would be a citizen of the Roman Empire, he wouldn’t necessarily have been from Italy – soldiers and senior military figures were recruited from across the empire.

While the family would have eaten, slept and lived together in the quarters, it was not private. The bedroom functioned as the sitting room as well, and the commanding officer would have entertained visiting dignitaries. Access to these rooms were controlled by the porter, who had his own small room at the front of the villa.

The second of four interconnecting rooms in the house, there was a dedicated workspace for the commander of the 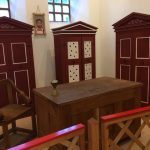 garrison. Here, he would have written letters and composed reports, and most likely had discussions with servants and soldiers.

The large desk we see in the photo is interesting not because of its design, but where the chair is positioned in relation to it. For reasons not quite clear, Romans sat at the shorter end of the table, which meant they could not tuck their knees under the desk.

In the family room, there is a small wicker chair, which would have been used by the commanding officer’s wife. The low table would have held food, easily in reach when she stretched out a hand. As with the bedroom, guests would come into this room, and discussions and study have taken place. Those allowed in here would have been important people, rather than VIPs. The family room would have been reasonably warm and well-lit.

The largest and warmest of the rooms, the bedroom had several functions. The sofas would have been used by guests 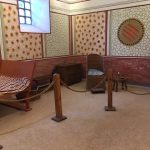 during the day, and doubled as beds at night. It would have also served as a study, probably for visitors. Meals tended to be eaten in any room, although adjacent to the bedroom is the summer dining room.

The walls in the reconstruction are based on original décor that has been found during excavations, and would have been made of marble. At the far end, there is a wooden shrine which would have housed a statue of one of the many Roman gods; perhaps Vesta, goddess of the home, hearth and domestic life.