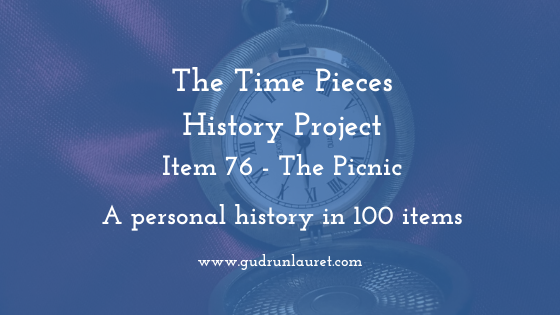 First time on the blog or new to the Time Pieces History Project? Find out what it’s all about here, and then come back to this page for today’s item – the picnic.

The Picnic – Introduction to Item 76

Who doesn’t love a picnic? Throw a load of sandwiches and crisps into a coolbox and job’s done! We often eat picnics when we’re on holiday, but it’s never really well thought out, we just take random food for when we get hungry. A feature of many car journeys when I was little was my mum making sandwiches in the front and handing them round, and it’s a habit I’ve picked up.

It’s nice, though, when there’s a group of people going out for the day when we’re in France, to stock up on fresh ingredients, grab a just-baked baguette and find somewhere scenic to sit down. We’ve found some beautiful little villages, usually beside the Nantes-Brest Canal, while on the hunt for a picnic bench. If they’ve got a toilet block nearby so we can wash hands, that’s even better!

The History of The Picnic 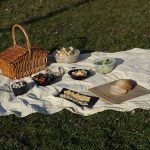 Before we look at the history of the picnic, we should define what one is. It’s a meal always eaten al fresco and part of an excursion of some sort, preferably in somewhere attractive, like a park, and in summer (certainly in Britain, where we mostly have rubbish weather!)

There is some debate about where the word comes from, too, although the most common idea is that it is formed from the French verb ‘piquer’ (‘to pick’) and ‘nique’, a noun meaning ‘a small amount.’ And the concept arrived before the term, with medieval hunting feasts and Elizabethan banquets in the great outdoors.

However, the word ‘pique-nique’ first appears in a French novel published in 1649, “Les Charmans effects des barricades”, a satire about the uprising against absolute sovereignty in the country. The main character goes by the name of Pique-Nique and is much admired.

He is also greedy and constantly eating, while his rebellion is causing food shortages around the city. According to an article in History Today, the name was ironic and most likely “referred to an excessively large or lavish meal, enjoyed at other people’s expense”.

The picnic soon established itself as a social event, where everyone was expected to bring a dish to share, although in the 1700s were held indoors. They were part of the salon world, and guests would have been invited because of their position, talent or beauty.

The French Revolution meant that many of the aristocracy fled across Europe. In England, the picnic had a brief revival when 200 young escapees founded the ‘Pic Nic Society.’ The aim was to be as extravagant as possible. They hired rooms and there was gambling, singing, dancing and a play, and each guest had to bring six bottles of wine and a dish chosen by lot.

As the Society was forced to close by the owner of the Drury Lane Theatre, cross because he was losing business, the practice was restarted in France, as post-Revolution society was allowed into the country’s royal parks. And in England, the middle classes adopted the picnic, and moved it from exclusive salons to outdoor settings.

Like so many other things, the Victorians embraced the notion of a picnic and then made it bigger and better. Rather than lobbing a few bits into a basket, in the 1800s, it was expected that eating outside would feature a table with linens, crystal glassware and servants to tuck the chairs in and serve the many courses of food.

Mrs Beeton, the famous food writer, had strict instructions for picnics, in the same way as she advised women on cooking and serving food in the home. Her “Book of Household Management” was published in 1861, and she carefully details the requirement for a picnic for 40 people. I’ve no idea who she imagined was being catered for!

Perhaps imagining that all the fresh air would make people hungry, Mrs B proposed a large selection of meat: two 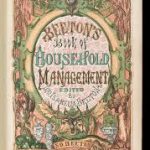 ribs and two shoulders each of lamb, two roast ducks, four roast fowls, one ham, one tongue and two joints of beef, one roasted and one boiled. And meat pies, obviously.

Alongside that, there would be thick-cut, well-stuffed sandwiches, with more meat, cheese and salad. And a huge array of desserts, including jam puffs (whatever they are!), cheesecakes, blancmanges and steamed puddings, because who doesn’t want a steamed pudding on a hot day?!

This could all be washed down with plenty of tea (but not coffee, because it was too hard to make outdoors), ginger beer and lemonade, and sherry or brandy for the grown-ups. When it came to water, Mrs Beeton was very clear: “water can usually be obtained; so it is useless to take it.” 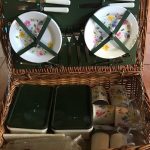 With so much food, Victorian picnickers would have needed something sturdy to carry it all in. The containers used were often as large as steamer trunks, which is possibly where we get the term ‘picnic hamper’ from.

Woven, wicker baskets would have been used for smaller picnics, and these have been popular since before outdoor eating was popular – the same design is used for shopping baskets too. In rural France, many women still use these on market days now.

The basket ‘sets’, like the one in the photo, are actually a 20th century invention. They’re certainly more practical than carrying crockery and glassware, and a lot lighter to transport. A blanket of some sort is also more practical than a dining table and chairs, and can be stashed in the basket or tucked under an arm.

History Today: The History of the Picnic
NPR: Picnicking Through the Ages
English Heritage: How to Have a Victorian Picnic