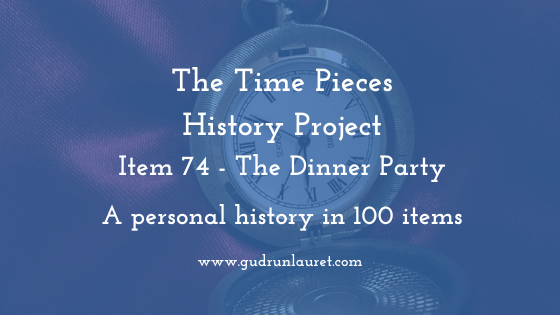 First time on the blog or new to the Time Pieces History Project? Find out what it’s all about here, and then come back to this page for today’s item – the dinner party.

The Dinner Party – Introduction to Item 74 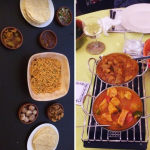 A dinner party always seems like a really glamorous thing to host, although by the time you’ve finished cooking, you feel anything but the hostess with the mostess. Having said that, I do like to have dinner parties. I love to cook, and I like trying out new recipes and doing themed evenings.

I also like the communal nature of a dinner party. When we were kids, relatives were often popping in at the weekend, or we’d go to my grandma’s for Sunday lunch with assorted uncles, aunts and cousins. When we went down to stay with family in York, dinner was normally the main event, and I remember being amazed by how long the grown-ups were content to sit at the table. I resorted to playing Thundercats underneath it.

The History of The Dinner Party

Obviously, people have been getting together to eat since the beginning of civilisation, so technically the dinner party has always existed. There can be a formal structure to dinner parties, with cocktails served before the meal, and place settings for guests to sit where the host wants them to.

Towards the end of the Victorian era, dinner parties were extremely popular in London. Invitations were sent out and RSVPs expected. Sometimes there was waiting service on hand to bring out the multiple courses, and guests were entertained by musicians, singers and poetry.

Formal dinners are a feature at many universities, particularly those with several colleges on campus. Smart dress or black tie is required, there are speeches and an order of service and different wines to accompany each course. They’re also part of life in traditional industries, such as law, and part of state visits.

While dinner parties happen in the evening, the eating of the meal known as ‘dinner’, usually the biggest of the day, 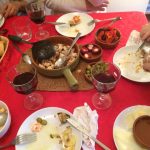 has happened at different times of the day throughout history.

Today, most of England refers to their midday meal as ‘lunch’ and the evening meal as ‘dinner’, but in the north east, we use ‘dinner’ and ‘tea.’ And to make things more confusing, ‘tea’ is not only a hot drink, but often another type of party – ‘afternoon tea’, which includes little sandwiches, cakes and scones. Sadly, none of these are part of a northern evening meal!

In 17th century France, Louis XIV dined at noon and had supper at 10pm, so he must have been starving in between. Over the following century, Europeans found their dinner time moving later and later in the day, as more people worked and in response to cultural practices.

As the 18th century wore on, dinner was eaten at either 2pm or 3pm – Marie Antoinette, before she became queen, had her court eating at 2pm, and in England, King George III liked to eat at 4pm. By about 1850, English dinners were after the men came back from work, from 5pm or 6pm, and in Paris they’d been eating at 7pm since the time of Napoleon.

Most of us are familiar with the idea of the lavish Roman banquets, with scantily-clad serving wenches pouring glass after glass of wine while fat, perspiring men clutched chicken legs in greasy paws, eating until they were sick. In reality, while some of the elite had parties like that (not that it sounds much fun!), most Romans didn’t eat to excess.

What IS true is that banquets would have been conducted lying down, which must have played havoc with the digestion. Like many other things, the Romans borrowed this idea from the Greeks, with beds laid out in a U-shape and small tables in front, all set up in the dining room (‘triclinium’). Everyday meals would have been consumed standing up or sitting down. 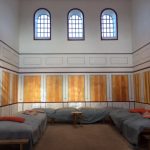 The triclinium at Arbeia

The middle couch – lectus medius – was the best seat, and kept for the most important guest. It gave them a great view through the open doorway or window opposite, and meant they were positioned beside the host, who sat to the right.

The less important you were, the further down you were put. At Arbeia in the north east of England, the recreated Mediterranean villa features a triclinium set up in this way, with tables at either side of the doorway. These weren’t used for food, but drinks would have stood on one of them. The other was strategically placed for an ostentatious display of the commanding officer’s best silverware.

Entertainment was always provided, from poetry, musicians, dancers and even acrobats. Bigger banquets even featured wildcats trained to amuse the guests, or gladiators would be brought in to fight. If they fought to the death, that might explain the need to vomit…

The event started at 5pm, and would have lasted long into the evening, as there were so many courses to get through. Along with the usual suspects – meat, seafood, cheese and fish, the Romans might have dined on goat, rabbit and deer.

For those looking to really wow their guests, they might want to serve up fried peacock tongues, sow’s udders or the greatest delicacy of them all – the dormouse, even though it was illegal to do so. Some banquets served snails, roasted parrot and rabbit foetuses. 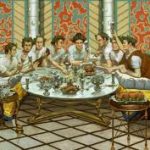 the Romans actually put on everything, known as ‘garum’. After all that excess, the guests would be happy to have a lighter dessert, most likely nuts or dried fruit.

The wealthiest Romans would go all out with food dyed different colours, tasty morsels brought in from all corners of the empire and dishes presented in all manner of fantastic ways. It also gave them an opportunity to display their sadistic side.

Emperor Domitian, who was especially cruel, sat his guests down for one banquet in a black-draped hall and gave them each a gravestone with their name on it. They were served food that had been dyed black, and the emperor cheerfully turned the conversation to slaughter whenever he could. At the end of the meal, the guests fully expected to be executed, but Domitian sent them on their way with armfuls of presents.

Even worse was the Emperor Elagabalus, who actually did kill his guests. The banquet hall they were seated in was fitted with a false ceiling. When it tilted open, flowers fell down. Rose petals were a common feature of banquets, but the deranged Elagabalus arranged for so many flowers to drop that a number of the diners were suffocated.

Excessive as they were, however, the guests at Roman banquets were not sick into buckets or rushing to the vomitorium to make room for more food. The vomitorium was a real thing, but it was the term given to an exit passage under the seating area of an amphitheatre used by spectators. ‘Vomitorium’ comes from the Latin ‘to spew forth’ but refers to people leaving the building, not food leaving people.

The Tudors, particularly Henry VIII, are also noted for their gluttony at mealtimes. However, despite the idea that they were unrestrained pig-outs, they were formal events with etiquette to follow. The host wanted to impress his guests with the amount and quality of the food. 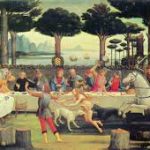 Diners would have had a knife to cut off pieces of meat which were served on big plates. Hand-washing was encouraged and polite behaviour was expected. The court of Henry VIII was inspired by French customs, and banquets were a big deal (as was the king!)

The courses all came out at the same time, so guests could have their favourites. A centrepiece would often feature, and would be something like a pie crust with live birds inside, or a dead bird redressed in its own skin. Meat was a key part of the Tudor meals, and a spit would be nearby. Leftover food was always given to the servants.