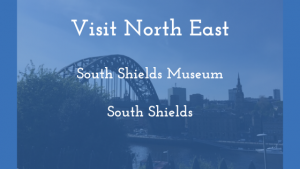 *DISCLAIMER: I intended to visit the South Shields Museum to take my own photographs & learn more. I will be updating this post after the Covid19 lockdown has ended* 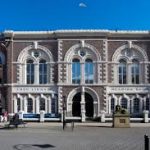 The South Shields Museum is a huge, beautiful, stone-fronted building with white plaster features on the windows. It sits right in the centre of the town, at the top end of Ocean Road. If you go all the way along the road, you come to the North Sea, which feeds into the Atlantic Ocean.

The museum was built in 1860, although at that time its function was as the home of the South Shields Literary, Mechanical and Scientific Institution. In 1873, it became a free public library and reading rooms, and the large windows at the bottom of the building still have this written above them. However, just three years later, it was made into a museum as well. The library shared the space until 1976.

The building was designed by architect John Wardle, who took the Italianate quatrocento style as his inspiration. This led to the columns, arches and curved glass ceilings that are still there today, and the permanent collections are housed in galleries across two floors. Unsurprisingly, it is now a Grade II listed building.

The displays show what the area was like 4,000 years ago, and charts the development of the borough of South Tyneside from its maritime history to the impact of industrial and social change. At one time, the shipyards and mines made the borough busy and prosperous, but by the 1930s the area was suffering poverty and unemployment. In protest at this, 200 men marched from Jarrow to London in 1936, an event commemorated at the museum.

To access the second floor, visitors go up the grand staircase, where, on the half landing, they are greeted by three 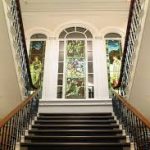 amazing, full-length stained-glass windows. The centre window is made up of three panels, all made by Clayton and Bell of London at the start of the 20th century.

The window is from the Holy Trinity Church in South Shields, which was built in 1833. Designed by Durham-born architect Anthony Salvin and holding 1,200 people, the church was demolished in 1980. The three panels show (top to bottom) the miracle of giving sight to the blind, the parable of the Sower and the parable of the Good Samaritan. 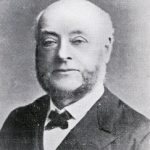 The two other windows, showing St. John to the right and St. Andrew to the left, were made by Edward Burne-Jones, the pre-Raphaelite artist. He was commissioned by the sister of Andrew Leslie, a Scottish shipbuilder who moved to Hebburn in 1853.

Many Scots workers relocated to Hebburn to work for Leslie, but were disappointed by the lack of a Presbyterian church. Leslie funded the building of St Andrew’s Church in Hebburn in 1873. It had the highest steeple of any non-conformist church in the area.

Designed in memory of Leslie, the windows were part of a set of five, initially on display in College Road Presbyterian Church, but were moved in 1933. Sadly, the building was vandalised after the congregation moved to a new church, and the windows were damaged. These two were saved and brought to the museum.

Do you neeed some help with getting started with content marketing for your musem?