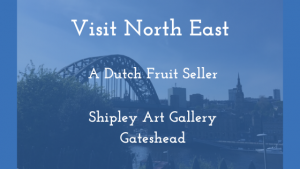 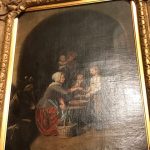 The painting ‘A Dutch Fruit Seller’, showing a bonneted old lady handing out fruit to a golden-haired little boy, was painted by Dominicus van Tol sometime in the 17th century, although there is no exact date given.

Van Tol was born in around 1635 in Bodegraven, a town (formerly a municipality) in South Holland. His uncle, Gerrit Dou, was also a painter, and had studied under Rembrandt. Both men painted scenes from everyday life, also known as ‘genre scenes’ such as this work.

They were also part of a small group of artists known as the ‘Leiden Fijnschilders’ (fine painters). Based in the city of Leiden and active between 1630 and 1710, the men created natural, as realistic as possible works, often on a very small scale. They often employed ‘trompe l’oeil’ (‘trick of the eye’) techniques to create three-dimensional optical illusions.

Van Tol was also a member of The Leiden Guild of Saint Luke, made up of three art collectives. In order for artists to sell their works, they were required by the city rulers to be members of a guild. It was founded in 1648 by Dou and several of his colleagues signed a charter to set it up. It would have represented van Tol until his death in 1675.

As we know, the Shipley Art Gallery has an impressive collection of works by Dutch Masters, carefully acquired by 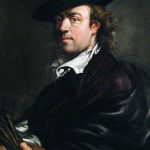 Joseph Shipley and selected from his estate by committee.

The period in which Dominicus van Tol, his uncle and their artist friends were working is often referred to as ‘the golden age’, or ‘Gouden Eeuw’ in Dutch. It covers most of the 17th century, and as well as the arts, it includes advances in trade, military and science which made The Netherlands the envy of the world.

Following a series of rebellions and wars, there was a migration of skilled worked into the Dutch Republic, many of them Protestants. Increased literacy rates and lowered interest rates, combined with available capital, enabled the region to flourish. At this time, they also had the monopoly on trade with Japan.

The Dutch East India Company, founded in 1602, further strengthened its hold in 1640, with its trading post on the island of Dejima, in the bay of Nagasaki allowing it to trade between Japan and China, a grip it maintained until 1854. The Dutch educated the Japanese on industry and science, and were in turn influenced by the local culture.