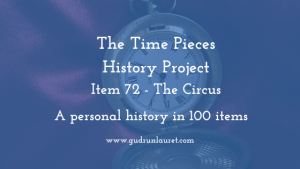 First time on the blog or new to the Time Pieces History Project? Find out what it’s all about here, and then come back to this page for today’s item – the circus.

The Circus – Introduction to Item 72 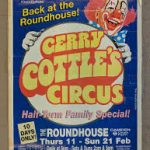 When I was very young, we went to see Gerry Cottle’s circus when it was in York. I remember being utterly mesmerised the whole way through. The lights and sounds (no smells, because I’m anosmic!), the clowns, the ringmaster…

Standout acts for me were the aerialists – the Flying Belle Stars – who swung on trapezes high up in the Big Top. Apparently they were the only all-female troupe in the country at the time. And my other favourite was the elephant, who stepped gently over a terrified woman who had been plucked from the audience and made to lie down in the sawdust.

Some years later, my brother and I saw the Chinese State Circus, which was quite different, but equally breath-taking. There are no animals, but there is enough to keep the audience entertained. Much of the acts are acrobatics-based, but there is some martial arts and music included too. I am yet to see Cirque du Soleil, but it’s on my list!

The History of The Circus

The circus as we knew it until recently was the invention of Englishman Philip Astley, who became a showman after a stint as a sergeant major for the cavalry. Born in 1742, Astley discovered a talent as a horse trainer during the Seven Years’ War (1756-63), which led him to a career as a trick rider, inspired by those who came all over Europe to perform in England.

He opened a riding school in 1768, where classes took place in the mornings and performances by the tutor in the afternoons. He built a circular space for these which he called the circle or circus, although this was something Astley copied from other trick riders.

The circus allowed riders to take advantage of centrifugal force and stand on the back of a galloping horse, as well as 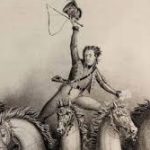 making it easier for the audiences to see what they were doing. While Astley didn’t invent the circus, he did set the standard diameter at 42 feet, which had now been adopted the world over.

Astley soon realised that he needed variety in the shows, which led to him bringing in jugglers and acrobats to mix things up a bit. He also introduced the clown, which had been a feature of Elizabethan theatre, to entertain the audience between the main performances.

In 1782, Astley opened the first circus in Paris, and at the same time, a former member of his circus set up in opposition to him. Charles Hughes founded the Royal Circus and Equestrian Philharmonic Academy, and from then on ‘circus’ was the name given to troupes of trick riders, jugglers and so on.

In Europe, the circus was confined to specially-built buildings in the bigger towns and cities. In America, though, they took a different approach, and put the entertainers on the road. It began with Astley, whose influence reached across the Atlantic.

John Bill Ricketts, trained by one of Astley’s students, put on an event in Philadelphia in 1793. 800 spectators, among them President George Washington, were entertained by acrobats, a rope-walker and Ricketts himself, who was a trick rider. Ricketts used a ‘circus’ with a wall around it and an open roof. 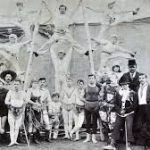 Ricketts’ troupe went on tour, often travelling by boat because roads were in such poor condition. They had to build themselves a ring every time they stopped, because America didn’t have large spaces set up for this kind of performance. The cost of doing so was so high that the troupe then stayed in one place to recoup the construction expenses.

Although there were challenges, Ricketts did well enough that other European circuses came to take a section of the marketplace. Post-1812, American showmen began to do well. In 1825, the state of Delaware banned public amusements inside the city.

An entertainer by the name of Joshua Purdy Brown was almost caught out by this on a circus tour, but decided to erect a canvas pavilion on the edge of the city limits, thereby obeying the law but still allowing him to attract an audience. From then on, travelling, covered circuses were increasingly in demand in a growing country with a spread-out population.

The Greatest Show on Earth

PT Barnum, who had already had considerable success with his Travelling Museum, had retired from the entertainment life when the museum caught fire. However, he was still an entrepreneur at heart, and when he was asked in 1871 to support a circus founded in Wisconsin by William Cameron Coup and Dan Castello, he agreed.

Billed as ‘P.T. Barnum’s Great Traveling Museum, Menagerie, Caravan, and Hippodrome’, it included elements of circus, music hall and the same sort of macabre exhibits Barnum had displayed, leading him to describe it as ‘Th 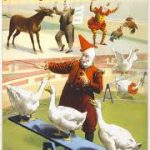 In the 1860s, James E Cooper had formed the Cooper and Bailey Circus along with James Anthony Bailey, and they became the main competition to Barnum. It then gets a little confusing, so please pay attention!

Barnum persuaded Bailey to merge their circuses into one in 1881, and it was given the distinctly un-catchy name of ‘P.T. Barnum’s Greatest Show On Earth, And The Great London Circus, Sanger’s Royal British Menagerie and The Grand International Allied Shows United’, which was fortunately soon renamed as ‘Barnum and Bailey’s Circus’. 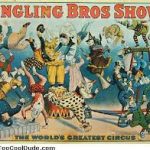 Following Barnum’s death in 1891, Bailey purchased the circus from his widow, and toured with it in America and Europe. In Wisconsin in 1884, five Ringling Brothers (there were seven in total, all performers) started their own circus, which grew rapidly, and became strong competition to Barnum and Bailey’s circus. After Bailey’s death in 1906, the Ringlings bought the circus.

Run as two separate circuses at first, in 1919 they were combined into ‘Ringling Bros. and Barnum & Bailey Combined Shows’, billed again as ‘the greatest show on earth’. The circus continued after the deaths of the five brothers, run by various relatives, and then other families, although it finally ended in 2017.