The Shipley Art Gallery is a large, imposing sandstone-coloured building, which sits by itself on a main street – Prince Consort Road, named in honour of Queen Victoria’s husband, Prince Albert. Over the road from the gallery is the town library, and beyond that the leisure centre. The gallery has a large entranceway and two statues loom down from the roof.

The History of the Shipley Art Gallery 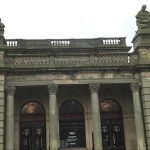 The Shipley opened in 1917, named after Joseph Ainsley Davidson Shipley, who died in 1909. A solicitor and art collector, the mysterious Shipley bequeathed more than 2,500 works to be put on public display. Not much is known about him, other than that he lived at Saltwell Towers in Saltwell Park, and began collecting art at the tender age of 16.

Despite having been born and bred in Gateshead, Shipley’s will specified that the works for the city of Newcastle, although with a clause that none were to go to the Laing Art Gallery. Quite why this was is not clear, but the upshot was that the council rejected the offer.

The executors duly picked out 359 of artworks they thought best represented Shipley’s collection, and a Committee from Gateshead chose an additional 145. The rest of the collection was sold, and the building of the gallery began.

Arthur Stockwell, a Newcastle-based architect, chose four stone columns with pilasters at the sides, in the Corinthian style, to stand as the entrance portico. He was inspired by ‘distyle in antis’, a technique from classical architecture where the sides of a temple protrude forwards.

The sculptures on the top are two figures – one to represent Industry and Learning, and the other the Arts. 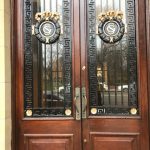 Edinburgh sculptor W Birnie Rhind was commissioned to produce these. After the gallery opened three years later, visitors were able to see works dating from the 16th century to the 19th, and representing the main European schools.

In the hundred years since the Shipley Art Gallery, the collection has increased rather dramatically – there are now around 10,000 items in it. There are a number of Flemish and Dutch paintings, and ‘The Blaydon Races’, by painter William C Irving. Irving was inspired by Geordie Ridley’s song about a day out to the racecourse, written in 1862 and published in 1891.

The gallery is open every day except Sunday, and is free to visit. Today, it often hosts guest lectures and special events. It boasts an extensive collection of contemporary craft works, one of the best outside of London, and is also home to The Henry Rothschild collection of studio ceramics. Rothschild sold works by the major ceramics manufacturers in the mid-20th century.