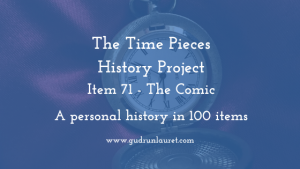 First time on the blog or new to the Time Pieces History Project? Find out what it’s all about here, and then come back to this page for today’s item – the comic.

The Comic – Introduction to Item 71 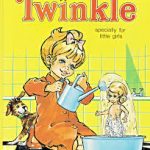 When I was a little girl, my dad used to take me to Bettys Tea Room in York for breakfast – I always had orange juice and a bacon sandwich, which they excitingly cut into triangles.

The other reason I liked to go to Bettys was because they had comics for me to read while I waited for food. I was given the important job of going to get the reading materials – a paper for my dad and the Twinkle comic for me – which were hung up on special pegs. Twinkle was the name of the main character, but there were various strips featuring different people. In one, Nurse Nancy ran a dollies hospital, and another followed Polly and her magic paint box.

When I got older, I subscribed to Bunty, which my mum read in the 60s. Bunty herself made appearances, but the main strip, for me at least, was the Four Marys, which told of the adventures of four girls called Mary (yes, really) at a boarding school. While these were in every comic, there were also six or eight week stories which had a conclusion to them. I even went through a phase of collecting vintage girls’ comic annuals, including Mandy, Judy and Diana, buying them for 50p at car boot sales.

The History of The Comic

If we regard a comic as a series of pictures which tell a story, then in its earliest form it dates back to the Romans – the Trajan Column, dedicated in 110AD, shows a sequential narrative. Likewise, Greek friezes and Egyptian hieroglyphics also tell stories. The Bayeux Tapestry uses words and pictures to describe the events leading up to and beyond the Battle of Hastings.

However, the viewer/reader had to go to see these works rather than having them posted through the letterbox. Even early Christian teachings, which used images rather than text and which were found all over Europe, would have been displayed somewhere accessible by the public.

The invention of movable type and allowing words and images to be produced and printed easily, meant that mass-produced comics was practical. Early versions tended to be religious and educational, although the medium was ripe 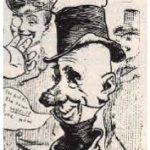 for political and satirical commentary.

William Hogarth, when not funding art galleries, created sets of sequential images in painting form. ‘A Rake’s Progress’ had eight canvases to communicate the narrative. After the Industrial Revolution, newspapers and magazines were established, and used pictures, known as cartoons, to quickly make points on current events. A ‘cartoon’ is a pencil or charcoal sketch to be painted over.

In 1826, the first ‘comic magazine’ was published. ‘The Glasgow Looking Glass’ used speech bubbles, sequential pictures with captions and instalments to mock the politics and fashions of the time. Satirical British magazine Punch, launched in 1841, used cartoons in much the same way, and magazines in Europe and the US followed suit.

In 1867, Ally Sloper became a regular character in British magazine Judy, before getting his own comic. It reached a circulation of around 350,000 and was extremely popular with the working classes. US comic strip Hogan’s Alley established the conventions and forms we now come to expect.

The History of the Comic Book

To me, a comic book is different to a comic because it concentrates on one long story, rather than shorter strips with different characters, although it turns out there’s a bit more to it than that. Things such as writing, colouring and structure are important, as is the use of speech balloons and panels. 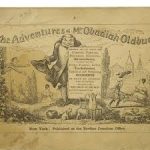 The comic book really originated in America, with the publication of ‘The Adventures of Mr. Obadiah Oldbuck’ in 1842 (although he was actually created in Switzerland by Rodolphe Töpffer, under the name ‘Histoire de Mr. Vieux Bois’ – ‘Mr Wooden Head’).

Mr. Oldbuck seems to be fond of melodrama. He falls in love with a beautiful young woman, who rebuffs his advances, leading him to attempt suicide twice. He then discovers a rival for her hand, challenges him to a duel and wins the hand of his beloved. The comic then follows his further misadventures and suicide attempts, which is probably funnier than it sounds.

In 1938, Superman made his first appearance, marking what’s now known as ‘The Golden Age of Comic Books’, a period populated by superheroes who fought villains and saved the world. It’s believed that these characters reassured younger readers who were worried about nuclear war.

After the Second World War, superheroes fell out of favour, replaced by romance, crime and horror comic books. It was thought that these books encouraged juvenile delinquency (presumably not the romance ones!) and the Comics Code Authority was introduced in 1954 to regulate the content.

This led to the revival of superheroes in 1956, a period lasting until 1970 and termed ‘The Silver Age of Comic Books.’ DC Comics introduced The Flash and the Justice League of America, and Marvel brought out The Fantastic Four in response. Stan Lee was a leading figure in this new age.