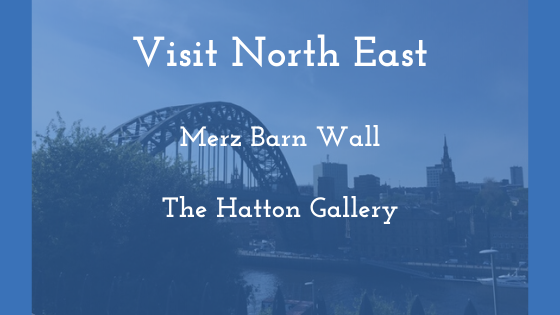 Artist Kurt Schwitters began the Merz Barn Wall in Ambleside in 1947, working in a building on the Cylinders Estate belonging to architect Harry Pierce. He met Pierce earlier in the year when he was commissioned to paint his portrait. Pierce gave Schwitters the use of the barn for £1 per week.

Schwitters developed ‘sculptural environments’ for viewers to enter and walk around, and the intention was to produce an entire barn for people to experience. The barn wall is the only thing to survive of the installations known as ‘Merzbau’, although the idea was influential on many other artists who followed him. 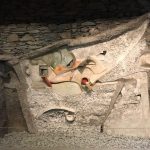 Schwitters had created Merzbau out of huts and other buildings in both Germany and Norway, which were later destroyed, so he decided to make another in the barn he was renting from Pierce. Along with his new partner, Edith Thomas, he began collecting objects to embed into the barn walls.

The barn was a damp, slate-walled, glorified shed with three small windows. Schwitters and Thomas collected metal, stone, the frame of a mirror and a ceramic egg for him to work with. These were carefully placed on an end wall, with plaster applied to hold them in place. Some parts of the plaster were then smoothed and painted.

Schwitters was born in Hamburg, Germany, in 1887. As well as art, he worked in graphic design and wrote poetry. He was associated with other artists of his time, such as Constructivists and Dadaists, but had his own movement, which he called ‘Merz’, a word made from ‘Commerzbank’, printed on a scrap of paper in one of his works. Much of this work was collages, made of things he found.

Although his work had been displayed by the Nazis in 1933, as part of their ‘degenerate art’ exhibition, within two 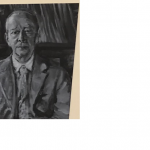 years much of his work was confiscated and mocked. In 1937 he fled to Norway with his son Ernst before the Gestapo caught him, but he was forced to move again in 1940. He was interned on the Isle of Man for 18 months before reaching Ambleside.

He was already unwell when he began work on the Merz Barn, so focused on completing at least one wall, which he did. He died in January 1948, six months after starting the project which has become one of his most important pieces and serves as his legacy.

The Wall at the Hatton Gallery 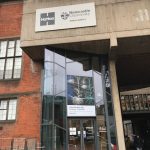 With the end wall the only completed part of the Merz Barn, it was left to stand on the estate for over a decade. In 1959, the Hatton Gallery held an exhibition of Schwitters’ work, and Professor Lawrence Gowing was careful to tell the Arts Council about the Wall’s significance.

Harry Pierce agreed that the Arts Council could take the Wall, but finding it a permanent home proved difficult. Both the Tate and the Scottish National Gallery expressed an interest before deciding against it. Gowing’s colleague Richard Hamilton worked hard to persuade Newcastle University to have the Wall, and in 1965 it was moved from Ambleside to the Hatton Gallery.

Would one of your collection exhibits benefit from a blog like this? Find out how.