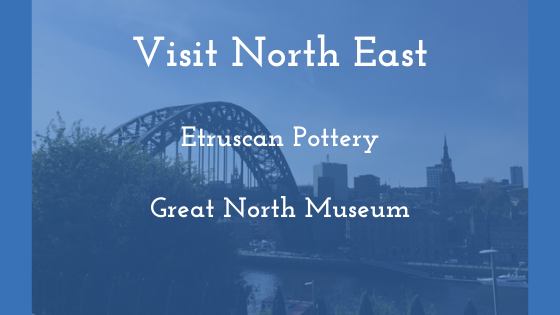 The Great North Museum has so many fascinating artefacts that it’s hard to choose one. I was tempted to pick something from their extensive Roman collection, which includes a replica Hadrian’s Wall and tombstones amongst other things, but I resisted. Instead, I’ve chosen this vase from their collection of Etruscan pottery. I like it because it represents the broad outlook of the early founders and collectors. 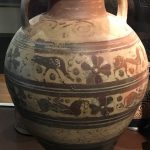 The pottery often included deer and wolves, as well as domesticated animals, such as sheep and cattle. The Etruscans were keen to replicate and celebrate the countryside of their homeland, and decorated fruit dishes and amphorae as well as vases. The large, two-handled amphora shows flowers, a bird which may be a peacock, and an animal I can’t identify! It dates to between 600 and 500BC,

The pottery was also included in the grave goods of the wealthy. Men were interested in war and athletics, so these were both themes included on grave pottery. The amphora shown below, which dates back to between 400 and 300BC, depicts a chariot race. Athletic games even formed part of the funerary rites.

Over five centuries, the Etruscans produced a great deal of pottery, which varied widely in design and style. The early works are often in black, which is known as Bucchero, and life-size terracotta sculpture was also popular. Surprisingly, although they had access to (and controlled the supply of) marble, they didn’t often use it in their own art. Bronze was used throughout their existence.

Before they were Etruscans, their early ancestors were known as Villanovans, from central Italy. We learn from the display boards that these people were skilled in metalwork, creating burnished pottery and brooches to fasten clothing, known as fibulae.

The Etruscans came from Etruria, situated between the Arno and Tiber rivers, south and west of the Apennines. An urban civilisation, they inspired many practices used by their successors, the Romans. The culture dates back to 900BC, ending in 27BC when the Roman Empire took over.

The Etruscans themselves were inspired by the Greeks, borrowing many aspects of the culture. They were particularly taken by Grecian pottery, which led to an influx of Greek artists to the area. In fact, demand for things like wine cups was so high that both Sicily and southern Italy became home to large numbers of migrants. The Greeks, in turn, were fascinated by the Etruscan bronze work.

Etruscan tombs, although usually those of nobility rather than everyday citizens, gives archaeologists and historians an insight into their civilisation. Near Cerveteri, the Banditaccia necropolis revealed an impressive collection of Greek painted pottery, and much of what we have today has been found in graves throughout their former city sites in Italy.

Interested in having some blogs for your own art gallery collection?