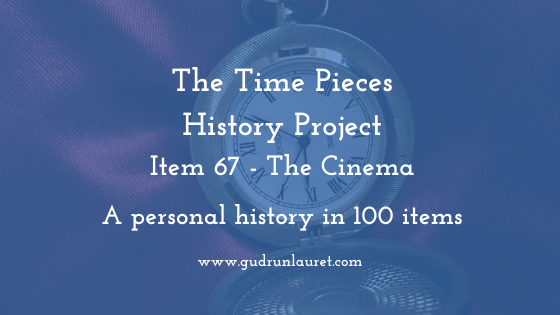 First time on the blog or new to the Time Pieces History Project? Find out what it’s all about here, and then come back to this page for today’s item – the cinema.

The Cinema – Introduction to Item 67

One of my mum’s favourite stories is when she took me to see The Flight of the Navigator when I was about three. I was very taken with the little alien that sat beside David, so I decided I’d take it home. When the film had finished and the credits rolled, I headed down to the front and attempted to climb into the screen to claim my alien. I cried all the way home while my mum tried to explain that the film, and the characters, weren’t actually real.

Going to the cinema was always a big deal. We had a lovely Odeon in Newcastle, which has since been demolished (outdoor bar and restaurant venue Stack is in its place), and we used to go next door to McCall’s for our sweeties, which was much cheaper than buying at the cinema. Nobody ever wanted to sit beside me though, because I talked all the way through the film. I’d like to say I’ve grown out of that annoying habit now…

The History of The Cinema

The precursor to motion picture films was chronophotography, which was used in the 1870s as a way of capturing a series of movements in still photos. The intention was to help artists and scientists understand motion, and took advantage of developments (pun intended!) in photography. 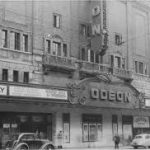 While the images themselves didn’t move, viewing them together helped people get a sense of motion. Chronophotography (from the Greek ‘chronos’ – ‘time’, ‘photos’ – ‘light’ and ‘graphe’ – ‘drawing’) was happening at around the same time as explorations into moving pictures.

According to the Science and Media Museum in Bradford, the invention of moving pictures can’t be credited to an individual. In 1891, the Kinetoscope prototype from the Edison Company debuted, which allowed one person at a time to look at moving images. The famous Lumière brothers first displayed projected images to a roomful of paying customers in Paris in 1895.

Early cinemas were anywhere indoors where lights could be turned off and pictures could be projected onto a screen. Unsurprisingly, the films were short, and not the narratives we think of today. Music was played and lectures given – as the films were often of foreign countries or events, it was probably helpful to have someone explain their context.

After the Lumières’ successful Paris show, cinemas sprang up all over the world, putting them alongside theatres and music halls as popular entertainment for the masses. National film industries were established by 1914, and the shows became longer. They moved away from documentary-style into storytelling, and colour was introduced from 1932. Early techniques for colouring images had arrived in 1906, but it was a difficult process for many years.

The History of Films

Now we’ve covered how cinematography started, I thought it would be good to look at films separately. In his book ‘A Short History of the Movies’, Gerald Mast says that the history of movies is “the history of a new art. Although it has affinities… with the drama… it has a ‘poetics’ of its own.”

Mast goes on to say that early directors were hugely influenced by stagecraft, with sets and perspectives carried over onto screens. “The camera was assumed to be a spectator… and as the spectator has only one seat, the camera had only one position from which to shoot.”

Once filmmakers realised that this was not the case, they could begin to experiment and make bolder choices. By 1896, inventive directors and producers were hot on the heels of Edison and the Lumière brothers, and the owner of the Théâtre Robert-Houdin, George Méliès, was keen to use cinema as a way to find a bigger audience for his illusions. The brothers refused to sell him a camera so he bought one from a rival, and within four years the Lumières were just about out of business.

Also in 1896, Charles Pathé began building his own film empire with his three brothers. Like the Lumières before 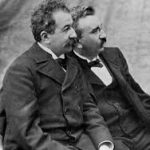 them, the Pathés were concerned with sharing real news rather than fiction, but with an eye to dominating the French film industry. To do so, they acquired the patent rights for Europe from George Eastman, and even owned a cinema chain.

In England, the decade between 1896 and 1906, was, in Mast’s view, “the most innovative in the world”. RW Paul, who had invented a film projector known as the ‘Theatrograph’, formed a group of inventors to experiment with moving pictures. They were named ‘the School of Brighton’ and worked on new methods for scene composition and editing.

Perhaps surprisingly, the US was much slower on the uptake, although the turn of the century saw a flurry of inventions and improvements to the technology, and an increase in the number of films produced in the country. The main challenge was turning dramatic stories into something that could be appreciated by viewers – no matter how successful Méliès and others were, their films lacked fluidity.

Edwin S Porter in 1903 and Cecil Hepworth in 1905 both tried to overcome this problem with more attention to cutting and editing, and DW Griffith had it mastered by 1908. From that point on, the film studios were in a race to be the biggest and best, a competition that reached its peak during the First World War. The chemicals used to make film stock were essential to produce gunpowder, so the European governments decided to prioritise weapons over entertainment. This effectively killed off the European cinema industry, leaving the way clear for the Americans and helping them assert a dominance they retain to this day.

It seems only right that I mention ‘The Jazz Singer’. Released in 1927, it was the first full-length, narrative film with a music score, singing and speech synchronised to the moving images. Former stage actor Alan Crosland was the director, and he had a string of writing, acting and directing credits at his untimely death in 1936. 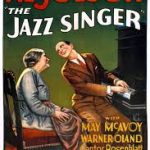 The film is based on a play of the same name by Samson Raphaelson. Somewhat confusingly, Raphaelson used his own short story, ‘The Day of Atonement’ as the play’s inspiration. The story was inspired by the early life of Al Jolson, who was later cast in the lead role in The Jazz Singer.

Teenaged Jakie Rabinowitz is expected to follow in the footsteps of his father, a Jewish cantor (prayer leader, who also sings religious passages and is sometimes called the ‘hazzan’). Unfortunately for dad, Jakie would rather be a jazz singer, and is spotted singing in a beer garden by a neighbour.

The cantor is outraged and whips his young son. In response, Jakie runs away from home and eventually becomes a successful singer, performing under the stage name Jack Robin. Jakie’s mother accepts his new career, but attempts to reconcile with his father fail.

The rather dramatic ending (well, I suppose it had to be) sees Jack about to have a dress rehearsal on Broadway when he learns that his father has taken ill on Yom Kippur (the Day of Atonement) and he is required to sing the Kol Nidre (the declaration at the beginning of the evening service). Although he’s torn, Jack manages to do both. His father hears him, forgives him, and promptly dies.