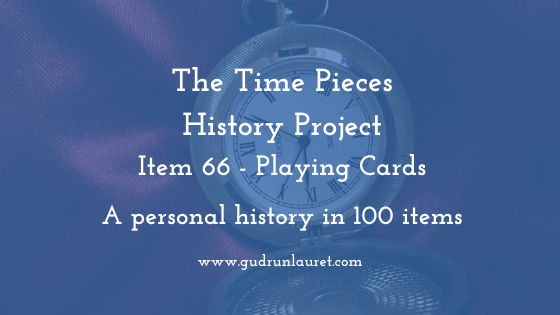 First time on the blog or new to the Time Pieces History Project? Find out what it’s all about here, and then come back to this page for today’s item – playing cards.

A pack of playing cards is one of the best things to have on hand. Everybody knows at least one card game, and they’re portable, so you can play them on the train, the ferry or at motorway service stations. Games are also versatile, so whether there’s just you, you and someone else, or several people, there’s something you can do with a pack of cards.

I used to play snap all the time with my Granda, although he definitely cheated. Despite only having one eye, he was much quicker than me at spotting a match. He would slam his giant paw down on the pile and shout ‘snap!’ in a loud, deep voice, which startled me so much (yes, every time) that I leapt a foot in the air and the game had to stop until he’d recovered from his laughing fit. He never dropped his pipe, though.

The History of Playing Cards

Like many other great things, playing cards were most likely invented in China. A 9th century text by writer Su E, called ‘Collection of Miscellanea at Duyang’, describes Tang dynasty Princess Tongchang playing ‘the leaf game’ with her in-laws. The Chinese had developed woodblock printing, which would have enabled them to produce cards of some kind for games, although another suggestion is that the ‘leaves’ were actually book pages used in a dice game.

Cards were also used in drinking games from around this time, although they were nothing like what we see now. Instead, they were printed with forfeits or other instructions to be followed by the players. The first cards may have served as stakes in place of less convenient paper money.

Two centuries later, playing cards had travelled across Asia and into Egypt, where the oldest surviving fragments have been dated to the 12th and 13th centuries. A 15th century pack was found in Istanbul in 1939, and would have been used in the Mamluk period. ‘Mamluk’ – Arabic for ‘property’ – usually refers to non-Muslim slave soldiers, although over time they did become respected military knights.

Across Asia, Arabia, Africa and Persia, while the appearance of the cards varied (for instance, the Sunni Muslim-controlled Mamluk cards had no figures on them), they all tended to be comprised of four suits of 12 cards, with the higher ones representing people of power (usually the king and his vizier – adviser).

The Evolution of Modern Playing Cards

Playing cards reached Southern Europe in about 1365, and based on the Mamluk suits – coins, swords, cups and polo sticks, which we still see today. Polo, however, was unknown to Europeans and the sticks morphed into batons. In the next 20 years, they travelled to Switzerland, Paris and Florence.

We know that the German monk Johannes of Switzerland mentions playing cards in a manuscript he penned in 1377, although as a religious man he was probably obliged to denounce them as a corrupting influence, in the same way that dice games were.

Professional card makers printed woodcut decks which were hand-coloured or stencils. The Metropolitan Museum of Art has the oldest complete set of European cards, dating to the 15th century. These were luxury goods and only the wealthy could afford them at first, until cheaper production methods were developed, and cards moved into the Germanic countries.

Italian 14th century cards included a king, queen and knave. The knave was a servant, but could also refer to a prince, which is why the name was changed to Jack, to prevent confusing it with the king. In Spain, decks had a knight but no queen (how annoying!) and no 10s.

In the Germanic countries, the Latin suits, as they’re known, became leaves and roses, evolving into the French suits of pikes, hearts, tiles and clovers in approximately 1480. The English acquired the habit of playing with French-style cards, although the confusion around ‘clubs’ for ‘clovers’ may have come from older Latin packs.

These early card packs were exported from Rouen, and the top cards (‘the court cards’) featured kings and queens in 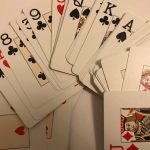 robes and crowns and Jacks with weapons. The English government is also responsible for the significance of the ace of spades – they applied a taxation on cards, which weren’t allowed out of the factories unless there was evidence it had been paid. Proof was provided by stamping the ace.

In 1828, it was decreed that the ace could only be purchased Commissioners for Stamp Duties; this was an attempt to prevent tax evasion, and led to ornately-designed ace of spades cards. This rule only lasted in 1862, but the convention continued.

Around this time, one Thomas de la Rue developed mass production of playing cards, allowing him to become the market leader. As he priced out smaller manufacturers, the appearance of cards became more standardised, and more or less what we use today. ‘Double-ended’ cards were also created to disguise the court cards to the other players.

Although a tarot deck has 78 cards in two groups, there are still many similarities with standard playing cards. The major arcana (‘secret’) group consists of 22 trump cards, and the minor arcana has 56 cards. The minor arcana is split into four suits – swords, wands, cups and pentacles. The court cards are the same, although a page is also included, along with an ace and nine numbered cards (known as ‘pips’, as in an ordinary pack).

The tarot, of course, was originally used for card games in the same way as the Mamluk cards were. In the 15th century, they were known variously as ‘trionfi’, ‘tarocchi’ and ‘tarock’, and it wasn’t until the 18th century they were used for divination (known as ‘cartomancy’ when cards are used). The earliest evidence for this dates back to 1750, with a reference in an anonymous manuscript, although the practice is probably older. 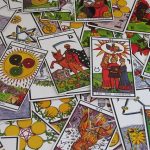 French clergyman Antoine Court de Gébelin, having seen a group of women playing cards, concluded (rather oddly, it seems) that it was not a game but of divine significance. In 1781, he wrote extensively about the Egyptian symbolism he imagined he saw, and even declared that ‘Tarot’ came from the words ‘Tar’ (‘path’) and ‘Ro’ (‘royal’). He completely made this up, and no evidence has ever been found to back up this linguistic claim.

French occultist Jean-Baptiste Alliette, also known as Etteilla, produced the first versions of tarot card, which were Egyptian- themed, following the idea that cartomancy originated there. The god of writing and knowledge, Thoth, was alleged to have referenced them in ‘The Book of Thoth’, a collection of ancient texts.

Various French cartomancers popularised their own versions, with variations on the meanings and interpretations. The major arcana, which includes the cards we’re familiar with, such as the hanged man, the empress and the devil, were always included although not necessarily used for divination. Marie Anne Adelaide Lenormand, cartomancer to celebrities such as Napoleon and Empress Josephine, used regular cards as well as tarot to tell fortunes.

Playing Card Decks: The History of Playing Cards
BeliefNet: Where do Tarot Cards Come From?