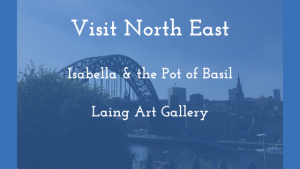 Isabella and the Pot of Basil, by William Holman Hunt, has always been a favourite of mine, so I was excited when the Laing Art Gallery chose to reproduce it on the side of the building. Unfortunately, it’s mostly obscured now by a rogue tree, but it’s still there. On first glance, the mournful Isabella looks like a bit of a sap, but the story behind it is quite bloodthirsty.

Isabella and the Pot of Basil 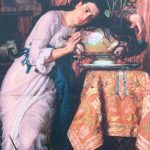 Hunt had done a sketch inspired by the story of Isabella in 1848, but it was not until after his marriage that he decided to revisit it. In 1866, Hunt and his pregnant wife, Fanny, travelled to Florence, where he started the painting. After Fanny’s tragic death in December that year, Hunt used her features for Isabella, making the work a memorial. It was completed in 1868, some months after he returned to England.

The young, beautiful and tragic Isabella, clad only in a pink, sheer nightdress, is depicted during a sleepless night. Her arms are wrapped around a large, round pot which is decorated with skulls, and her hair flows over it and across the basil growing out of it.

The pot contains the head of her lover, Lorenzo, murdered by Isabella’s brothers. Overcome with grief, she has taken his decapitated head and placed it in the pot which sits upon a shrine dedicated to his memory. The head has clearly nourished the soil, causing the plant to grow.

While there is a lot of detail to note in the painting, such as the Italian marriage dowry chest behind her, the turned-down bed and the rich, deeply-hued fabrics of her garments and the altar cloth, what I like most about it is the silvery watering can in the bottom right foreground – in real life, it shimmers as if it’s been captured on film.

Hunt, along with his fellow painters John Everett Millais and John William Waterhouse, was inspired by John Keats’ 1818 narrative poem ‘Isabella, or the Pot of Basil’ which tells the story of Isabella, whose family hopes to marry her off to a ‘high noble’ with an olive grove.

Instead, she falls in love with Lorenzo, a poor employee of her brothers’ and not their ideal match. The brothers 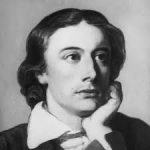 decide to bump him off and bury him. Lorenzo’s ghost visits Isabella and tells her what happens, so she decides, somewhat irrationally, to dig him up and keep his head in a pot.

Keats himself was inspired by a story from the Decamaron by 14th century writer Giovanni Boccaccio. The Decamaron features 100 short stories told by a group of 10 young people to entertain each other while hiding from the Black Death in Florence. Some of the tales were based on real events, although Boccaccio embellished them to suit his own ends, or inspired by much older stories from around the world.

Born William Hobman Hunt, the artist renamed himself when he discovered a clerk had made a spelling mistake on his baptism certificate. He attended the Royal Academy of Arts, although quickly fell out with its founder, Sir Joshua Reynolds. He became engaged to one of his models, Annie Miller, although that ended when she left him. 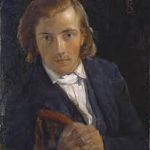 After the death of his first wife, Fanny, after five years of marriage, Hunt married her younger sister Edith. It was against the law for them to do so, which led to the couple travelling overseas for their wedding. He had Fanny interred in the English Cemetery in Florence, beside Elizabeth Barrett Browning, and sculpted her tomb himself.

Much of Hunt’s work, like those of his colleagues, was inspired by the natural world and the spiritual aspects of medieval art, and travelled to the Holy Land in the 1850s to create realistic works to bring Christ and his teachings to life. He was appointed to the Order of Merit by Edward VII in 1905, in recognition of his contributions to art,  and died in 1910.

Hunt was one of seven members of the Pre-Raphaelite Brotherhood, which was founded in 1848. The men were poets, art critics and painters, and were inspired by the Nazarene movement, a group of German Romantic painters in the early 19th century. The name was used as an insult as the members wore biblically-inspired clothing and haircuts.

The Brotherhood was against the style of artists such as Raphael and Michelangelo, which they regarded as an insult to the teaching of the craft of art. They thought that art should be complex and detailed, and were inspired by religion.

The other founders were the aforementioned Millais, brothers William Michael and Dante Gabriel Rossetti (a writer 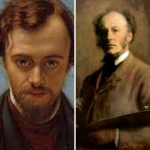 and a poet/painter respectively), along with art critic Frederic George Stephens, painter James Collinson and sculptor Thomas Woolner. Many other artists of the time shared the Brotherhood’s views too, and collaborated with them.

The Brotherhood began while some of its members were still students, and their doctrines were simple – to produce good work which expressed genuine ideas, to study nature and to exclude conventional, modern behaviours in favour of ‘serious and heartfelt…art.’

They often worked together, illustrating each other’s poems, sharing muses and models and exhibiting collectively. They were not without controversy and criticism, as one of Millais’ paintings was considered blasphemous. There was also a split in the Brotherhood, with DG Rosetti and his followers preferring a medieval tone to their work, and Hunt and Millais leading the realists, although they didn’t fall out completely.

Looking for some blogs for your heritage site? Find out more here.