First time on the blog or new to the Time Pieces History Project? Find out what it’s all about here, and then come back to this page for today’s item – the music festival. 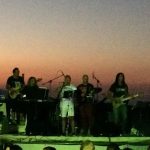 Music has always been a huge part of my life. My dad used to sing me to sleep, he’d play songs in the car and the record player was usually on in the background while we had dinner.

I remember watching the Woodstock documentary and being both baffled and entranced by the idea of spending a few days in a field watching band and after band perform. While I went to my first gig when I was 13 or 14 (Suede at Newcastle City Hall, in case you’re interested) I was 19 when I got to T in the Park in Scotland, on the hottest weekend of the year. I also went to Glastonbury a couple of times.

There’s always a great atmosphere at a music festival, perhaps because everyone’s there just to have a good time and enjoy themselves. They’re safe, too, and plenty of people take their kids. Although there are always stories of tent burglaries, I’ve never experienced that myself, or know anybody who has. I know a few people who got flooded out of their tents, though!

The History of The Music Festival

If you were thinking that the concept of a music festival didn’t occur anyone until the organisers of Woodstock in 1969, you’d be wrong. Apart from anything else, the Monterey Pop Festival was two years earlier. But, like a lot of things, it actually dates back to the ancient Greeks, who were always up for a party.

Back in the 6th century BC, the Panhellenic games took place in Delphi. One of these four, the Pythian Games, was held in honour of the god of music, Apollo (probably better known as god of prophesy). The Pythian Games featured athletics, as you’d expect, but they also had things to please the god – dancing and ‘mousikos agon’ – music competitions. Four centuries later, the Festival of the Vine Flower lasted three days and included dancing and singing, and started with a silent drinking contest.

In 1176, Lord Rhys hosted a bardic competition at his home in Cardigan Castle, which began the annual tradition of 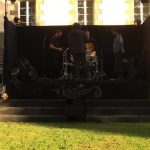 the Eisteddfod, to celebrate music and poetry from Wales. They all but disappeared for a few centuries, but were revived again in 1792 by Edward Williams, also known as Iolo Morganwg. Today, the National Eisteddfod of Wales lasts eight days. The name is made of the words ‘eistedd’ – sit and ‘bod’ – ‘be’.

In the Middle Ages, competitive music festivals were often held. One of the oldest festivals which is still going today is the Bayreuth Festival, which was first organised in 1876 by composer Richard Wagner as a way of showcasing his work. It was funded by King Ludwig II of Bavaria and attended by Kaiser Wilhlem I and Dom Pedro III of Brazil.

The oldest of the modern music festivals (if that makes sense!) is the Reading and Leeds Festival, which predates Glastonbury by nine years, although it only arrived in Leeds in 1999. It was originally a blues and jazz festival and founded by Harold Pendleton, who also ran the Marquee Club in London.

Minstrels did not always wander, but they were always entertainers. They were popular in Europe in the Middle Ages, and in the beginning some were fools, jugglers and acrobats. By the 16th century, however, the term strictly referred to a singer and musician. 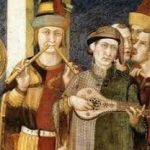 Their history begins even earlier than that – in pre-Conquest England a ‘scop’ (‘maker’) was the term applied to a professional poet who accompanied his works with harp music. The ‘gleemen’ were below that, and they wandered around trying to earn money.

Minstrels could be found at festivals and feasts as well as performing at court from the 13th century, and provided news updates and political propaganda as well as singing. The term comes from Old French via Latin from ‘minister’ (‘attendant’) which is derived from the Latin for ‘lesser’ – ‘minus’.

Minstrels either created their own stories, or memorised and added to those written by others. Their story-songs described far-flung lands, imaginary or real historical events and were loved by aristocrats and the upper classes. They were forced to wander when troubadours (also poet-performers, but often from Occitania, which includes parts of France, Spain and Italy) became more popular, and their appeal declined towards the end of the 15th century.

While the upper classes were entertained by minstrels, the lower orders had mystery plays, which included religious learnings as well as music and fun, and are documented as early as the 1300s. They began in York, and coincided with the Feast of Corpus Christi, 60 days after Easter. As up to 48 plays might be performed in one day, they had to get started with the waggon parade at 4.30am.

members, and perform at one of 12 designated spots. For instance, metal pinners nailed Christ to the cross, while shipwrights told the story of Noah. Things could get heated, and in 1419 the cordwainers rioted against the carpenters. In 1490, it was the turn of the weavers.

However, mystery plays weren’t confined only to York. In the beginning, religious leaders would perform similar stories on the steps of their church across Europe. In France, ‘The Acts of the Apostles’ had so many characters and lines that it took 40 days to perform it.  Although popular, over time, the Church grew suspicious of the plays and their Roman Catholic overtones, and the public decided they preferred professional performers instead, such as those travelling from Italy.