In the north east of England, we’re really spoilt when it comes to places to visit to learn more about our rich heritage, so I decided to produce a series on just some of the sites I recommend. The weather isn’t great at the moment, and a lot of stately homes are closed over winter, so to start off, I’m going to explore the museums and art galleries that are open (and warm!) all year round.

The Laing Art Gallery is very convenient if you’re in Newcastle city centre – a couple of minutes’ walk from Grey’s Monument, open every day and free to visit. They have regular exhibitions and there is usually a charge for these, but the permanent collections are worth seeing. 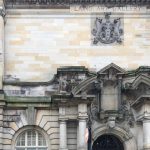 From the front, the Laing looks like a new building, with its green glass front and sliding doors. At the side, though, is the original entrance, with a beautiful, ornate stone arch over the top.

The building is Grade II listed, and was designed by British architect Robert Burns Dick, who was responsible for many houses and churches as well as municipal structures. He was in partnership with James Thorburn Cackett for around 20 years, with Cackett taking responsibility for the business side of things.

Burns Dick was also the brains behind the Spanish City pleasure venue in Whitley Bay, which has just been renovated and reopened. After the First World War, he was inspired by the garden city movement to create housing estates in the style of small English villages.

The building is in the Baroque style with Art Nouveau elements, and features a tower with a stone cupola, which you could almost see Quasimodo hiding in. It overlooks the lying-in hospital designed by John Dobson in 1825 for poor, married, pregnant women.

The History of the Laing Art Gallery

Founded in 1901, the Laing Art Gallery was funded by Newcastle businessman Alexander Laing, who ran a wine and 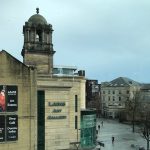 spirit shop. While he left money for the gallery itself, he didn’t leave any artworks, saying “…that by the liberality of the inhabitants [of Newcastle] it would soon be supplied with pictures and statuary for the encouragement and development of British Art.” Fortunately, the gallery was a success.

A year or so ago, I attended a lecture on the gallery as part of Newcastle History Month from a PhD art historian and learned a lot about its beginnings. The Laing had the same curator for 53 years – CB Stevenson – and he was instrumental in making the gallery what it is today. He put together a committee of the turn-of-the-century great and good, to help him build it up.

Stevenson borrowed art from institutions around the country as well as from private collections and hosted ‘private viewings’ for VIPs and journalists. He introduced regular exhibitions which took place even during the War, and started the permanent collection in 1915. The ‘Old Newcastle Exhibition’ which took place that year boasted 700 pieces of local artworks and attracted 40,000 visitors. 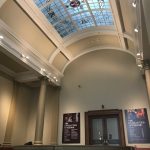 The exhibitions hosted during the war featured military art, which the government insisted on to boost morale, although 1918’s exhibit also included works showing the Northern Counties. These shows gave Stevenson the opportunity to network, promote the gallery and encourage new patrons to support him.

After the war Stevenson was gifted all manner of random war memorabilia, although he was more interested in acquiring famous artworks that the V&A had had in storage for the duration of WW1 and hadn’t put back on display after it ended.

One of the Laing Art Gallery’s biggest supporters, John G. Joicey, died unexpectedly in 1919, and his will revealed he had bequeathed £50,000 and his entire art collection, which made a huge difference to the permanent works held by the Gallery.

Do you need support with content marketing for your heritage organisation? I can help.