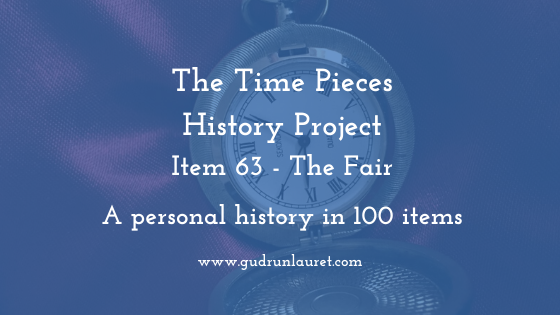 First time on the blog or new to the Time Pieces History Project? Find out what it’s all about here, and then come back to this page for today’s item – the fair.

The Fair – Introduction to Item 63 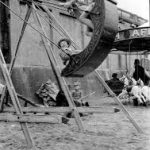 I loved the fair when I was little. A travelling fair comes to Newcastle every year and sets up on the Town Moor, just outside of the city centre. When we lived in Gosforth, my parents and I would walk along there a couple of times during the week it was on, and I’d go on a couple of rides – in those days, it was still 50 pence a go!

What I enjoyed more though, was the local hoppings the week before, which took place on the Windy Fields in the village where my grandparents lived. Some of the rides would stop off in Winlaton before the big fair opened, giving us a chance to test them all out.

I’m not particularly adventurous when it comes to fairground rides, though. My favourite was always the waltzer, which is about as vigorous as it gets for me! I also liked the shuggy boats, a kids’ ride specific to the north east of England. Two riders sit in a small boat suspended from a frame, and take it in turns to tug on a rope to make it move. Think of it like a small pirate boat that you power yourself!

The History of The Fair

What we think of when we hear ‘fair’ today is the funfair – flashing lights, screaming kids, candy floss smells wafting through the air and all manner of rides. In Roman times, though, they were effectively temporary markets, allowing traders to travel for miles to sell their wares and make connections.

The Romans designated the day or week a fair was held as a public holiday, and there was often a tie-in to religious festivals. Although the traders were there to make money, everybody else, including slaves, were given the day off. The word fair comes from the Latin ‘feriae’ – ‘holiday/holy day’. Some were at fixed times of the year, and others were held at different times each year. Special extra days were introduced as and when celebrations were called for.

In Europe in the Middle Ages, fairs served much the same purpose as they had for the Romans – as a way of bringing 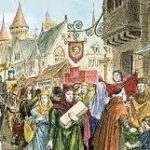 together merchants from all over the country. Animal sales fairs date back to 1293 in England, when the town of Stagshaw allowed people to buy and sell horses, lambs and so on.

So chaotic was the annual fair that the phrase “like a Stagey Bank Fair” became popular in the north east to describe anything messy. I’ve never heard this myself, so I wonder if it’s died out or usage is confined to one small area? Let me know if you’re familiar with it!

The fairs also included food stalls and games, music, magicians and other types of entertainment. As time went on, it was necessary to acquire a permit to hold a fair, because of the huge numbers of people descending on a town or city. Any unrest could lead to riots, so a Royal Charter had to be granted, usually in places where a sheriff or bishop to keep an eye on things and prosecute wrongdoers if necessary.

So, what about the funfair? Well, the proper name is ‘travelling carnival’ or ‘travelling fair’, to differentiate it from either a static market or a theme park style funfair. They are similar to the circus, as they’re held outdoors, on a large, empty patch of land and move from place to place. Early funfairs often had a circus as well. 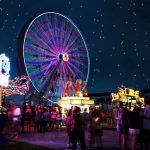 The World’s Columbian Exposition, held in Chicago in 1893 (and sometimes referred to as the Chicago World’s Fair) marked the 400th anniversary of Christopher Columbus’ discovery of America. It included rides, freakshows, burlesque performances, food stalls and games, as well as market traders. This was the catalyst for travelling carnivals in America.

In Europe, the Hull Fair is one of the oldest, dating back to 1278. In the 18th century the theme was entertainment, with puppet shows, theatre performances and so on. In the 19th century, there was also an educational aspect, as the Wombwell Menagerie brought never-before-seen animals to Yorkshire.

The introduction of mechanisation towards the latter half of the 1800s meant that funfairs were moving more towards the rides we’re familiar with today, including the carousel. The 1871 Fairs Act actually abolished many well-established and ancient fairs, although Hull Fair survived. In a brilliant example of Victorian morality, fairs were deemed immoral, unnecessary and damaging to the towns they visited.

Phineas Taylor Barnum, more often known as PT Barnum, was an American showman, circus owner and politician, and allegedly came up with the phrase “There’s a sucker born every minute”. While there’s no evidence of this, we DO know that he was a hoaxer and happy to take money from the credulous public.

He started out with a troupe of performers which were billed as Barnum’s Grand Scientific and Musical Theater, and then bought a museum which allowed him to display such ‘freaks’ as the Fiji mermaid (a young monkey sewn onto the bottom of a fish) and General Tom Thumb (a dwarf). I remember white buildings housing the freak show at the fair when I was little, but my mum would never let me go in, probably because she’d been horrified them as a child herself.

Barnum was keen to reassure his audiences that he was genuine, and even published a book entitled Humbugs of the 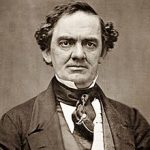 World in 1865. In it, he explained that it was necessary to create ‘novel expedients’ to attract people’s attention, but it was in the name of entertainment.

Of course, in reality he was exploitative and unconcerned with the wellbeing of his performers. At the tender age of 25, he began ‘renting’ Joice Heth, an elderly black woman who was passed off as George Washington’s nurse and aged 161. After she died (not really that old) he organised a live autopsy and charged people to attend.

Barnum had noticed the public’s appetite for oddities, ‘freaks’ and the unexplained, and at the American Museum, opened in 1841, he had 850,000 ‘interesting curiosities’ to intrigue his 4,000 daily visitors, each paying 25 cents. Some of the exhibits were genuine, such as wild animals, but others were people presented as something strange, such as William Henry Johnson, an African-American billed as a cross between a man and an orang-utan.

In the song ‘Girl From the Hiring Fair’ by English folk singer Ralph McTell, he details a young couple meeting and falling in love at work; their first encounter is at a hiring fair, a concept that seemed very strange to me as a child. In the liner notes, McTell describes a young man telling him after a concert that his grandparents met in exactly that way. 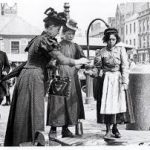 The hiring or mop fairs gave farmers the opportunity to find labourers and servants, and there was even a ‘runaway mop’ the week after the fair, so employers could return anyone not up to scratch. Hiring fairs began in the 14th century, after Edward III introduced the Statute of Labourers in 1351, and continued right up until the end of the 19th century.

Wife-selling even took place now and again, and Thomas Hardy used the experience of seeing one in Andover in 1817 as a fictional scene in his novel The Mayor of Casterbridge. Eventually, even the hiring fairs died out as people were more interested in rides and sideshows than buying employees.

Brittanica: The Fair
The Smithsonian: The True Story of the Greatest Showman
The University of Sheffield: History of the Fairground