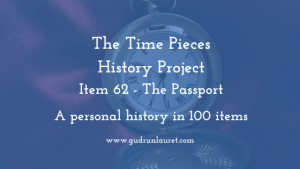 First time on the blog or new to the Time Pieces History Project? Find out what it’s all about here, and then come back to this page for today’s item – the passport.

The Passport – Introduction to Item 62 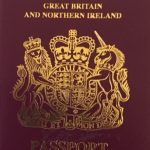 I think my passport is one of the most important things I own. I’ve been going abroad since I was very young, and travel is one of my favourite things. Like most children in the 80s, I was on my mum’s passport, and I remember it being a big deal to have me added to my dad’s when he and I went to Holland just before my brother was born.

The passport to me is a symbol of freedom and opportunity, of stories and memories to share and adventures yet to come. I’ve only once let my passport lapse (for a couple of months) and I felt sick at the thought that I couldn’t just head off somewhere if I had the chance. My biggest disappointment is that most countries don’t stamp passports, as I like to collect them. Of course, that might all be about to change!

The History of The Passport

Passports, or travel documents, go back to ancient times. In 450 BC, the Hebrew Bible notes King Artaxerxes I of Persia issues Nehemiah, one of his assistants, a letter to request safe passage as he travels to Judea. The Indian Sanskrit Arthashastra, a book giving advice on military strategy and statecraft published in the 2nd century BC, refers to a ‘superintendent of passports’ who gave anyone who wants to leave the area of Gujarat a sealed pass. 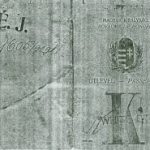 The Chinese were using ‘zhuan’ to give permission to people wanting to move across counties. These documents included personal details, and were used in the Qin dynasty (221 to 206 BC) by adults and children.

In medieval Europe, a passport was needed for anyone coming from other countries to pass through the ‘porte’ (gate). The document had a list of countries the holder could travel through, and were needed to travel from sea ports inland.

In Britain, King Henry V is believed to have issued the first ‘safe conduct’ document, with a reference appearing in a 1414 Act of Parliament. The king issued to these to people from all countries – his own subjects had to pay, but they were given free to foreign nationals.

The Privy Council took over issuing these in 1540 and then in 1794 the office of the secretary of state were given responsibility. Passports were written in French until 1858, when they were produced in English. They weren’t needed for international travel until the ‘British Nationality and Status Aliens Act 1914’ brought in a single-page, two-year document which included a photo, signature and description of the bearer.

A History of Travel

Humans started travelling for necessity rather than for leisure, when Homo erectus left Africa 70,000 years ago. Within 60,000 years, our ancestors had covered the globe, or at least every inhabitable landmass they could find. Nomadic people had to move to find food, water and shelter, so they had to cross countries to find them.

During the Neolithic Evolution, which took place around 10,000 years ago, animals and plants were domesticated, allowing groups of people to live together in communities and stay in one place. Travel from that point on was for exploration or for fun, rather than survival.

The Indus Valley Civilisation (which covered present-day Pakistan, India and Afghanistan) were the first to use a spoke and axle wheel, about 5,000 years ago. Attaching these to a chariot or seat of some kind would allow people to cover far greater distances. Of course, there were no motorways or even tarmacked roads, so they wouldn’t have been particularly comfortable. 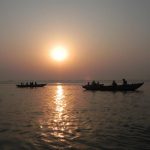 Boats on the Ganges, India

The Mesopotamians are credited with the invention of the boat, and there is evidence that ancient humans used rudimentary canoes to look for new places they could settle. Being able to visit different lands made trading a possibility, and the Egyptians onwards would build boats. For many centuries, boats allowed humans to explore the world and discover new countries. Adventurers all across Europe went looking in far-flung places for evidence of life or unusual goods.

Having financial backing was essential, and royalty was a good place to get this. Christopher Columbus got support from Ferdinand and Isabella of Spain, and Walter Raleigh was helped by Elizabeth I. Captain James Cook, who was born just down the road in Middlesbrough, was a distinguished Royal Navy officer, and the Admiralty commissioned him to explore on their behalf.

Travel purely for pleasure was often reserved for the wealthy upper classes, who could afford the cost of international trips and weren’t hampered by inconveniences such as going to work. In the 18th century, ‘grand tours’ of Europe were popular with the rich, who would visit churches, castles and other interesting places.

Of course, travel for tourists dates back to the Ancient Greeks and Romans, who went off to look at the Seven Wonders of the World, and pilgrimages have been date back 2,000 years, both to Mecca and Buddhist sites.

The History of the Travel Agency

Once people decided that they were going to travel for fun, it was clear that having some help in organising and booking their trips was a good idea, particularly for the aristocracy, who didn’t have time to do it themselves despite not having jobs.

Yorkshireman Richard Cox founded Cox and Kings Ltd in 1758. He became a military agent for the army, which meant he was responsible for organising accommodation and supplies for the troops. Developing successful partnerships allowed him to grow the business, and he was also helped by several wars and colonisations of different countries. The company is still operating today, although it provides leisure travel rather than focusing on military personnel.

In 1840, Bernardo Abreu opened his agency to support emigration from Portugal to Venezuela and Brazil. Today, it 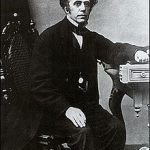 offers corporate, senior and youth travel options, as well as being a tour operation. Abreu beat Thomas Cook to the title of ‘first travel agency’ by one year.

Thomas Cook’s sadly went out of business at the end of last year (2019), but it had an interesting start. A teetotaller, Cook’s original plan was for 500 of his fellow temperance society members to attend a rally in Loughborough. He negotiated with Midland Railway to transport them, and earned himself a commission in the process.

Following that early success, Cook and his son set up their own agency, introducing the idea of package holidays (travel and accommodation) to the UK. They had a shop which sold accessories such as luggage and guidebooks, and they also pioneered the hotel coupon in 1868. Travellers were issued with a book of coupons which could be exchanged for a night in a hotel or an evening meal at any venue which participated in Cook’s scheme.

Today, travel agencies are less used thanks to holiday aggregate sites. However, anyone interested in sustainable, eco-travel, visiting exotic destinations or being able to experience a country like the locals will probably use an agent. Perhaps history fans would also benefit from someone who could point them to the must-visit sites!