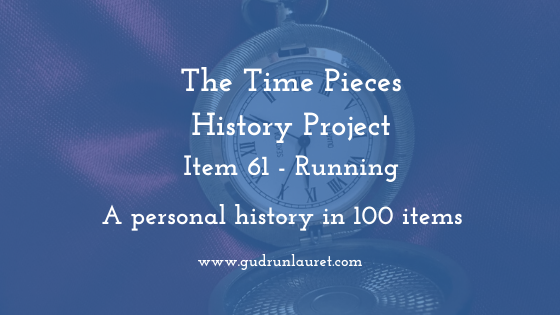 First time on the blog or new to the Time Pieces History Project? Find out what it’s all about here, and then come back to this page for today’s item – the running shoe. 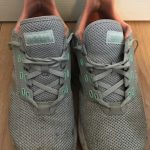 I’ve been running off and on since I was 11, but it was more off than on until my mid-20s. Now, I try to run three times a week for 40 minutes. It’s nothing impressive, but I love it because it clears my mind and I’m not distracted by anything.

I make a point of running on my birthday every year and I was even up early to go out for a jog the morning of my wedding! I’ve spent hours compiling playlists and getting bits of kit to carry my phone, keys and iPod. I’ve done the Great North Run once, but I didn’t enjoy it much as I was right at the back. There were also too many people (competitors and spectators!) and I view exercise as a very much solitary pursuit.

Running shoes reminds me of most of my family – my parents and my younger brother, uncles on both sides, my older girl cousins, who I went to Blaydon Harriers (running club) with for a while. Much like the Brownies, I didn’t last long because I couldn’t be bothered to go every week!

The History of The Running Shoe

Running shoes, it turns out, are older than I realised. An American called Wait Webster patented the process of attaching rubber soles to shoes and boots in 1832, and seven years later Charles Goodyear came up with vulcanisation – heating rubber with sulphur to make it both flexible and strong.

Spiked shoes, introduced in 1852, were used in cricket and then by runners. Rubber-soled shoes evolved into sneakers in the US – named after those who sneaked about, such as burglars – and plimsolls in the UK. Plimsolls featured a rubber loop around the canvas shoe, and reminded people of a way to measure ships’ loads; the technique was invented by Sir Samuel Plimsoll.

Rubber shoes were mostly manufactured by tyre companies, and their use as footwear for running was regarded as a 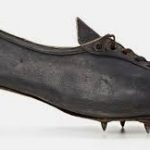 luxury for many years. As the cost of rubber production decreased after WW1, they became more affordable for the average person.

Adolf Dassler, of Adidas fame, was the first person to design rubber shoes for running, in the 1920s. Along with his brother Rudolf, who went on to found Puma, he started a shoe factory, where he manufactured shoes for long jump and cushioned spikes for track racing. In the 1950s, he also made lightweight football boots, which were credited with helping West Germany win the World Cup in 1954.

Of course, Ancient Greek runners weren’t wearing rubber-soled shoes, or indeed very much at all. The marathon race as we know it today was first dreamed up by the founder of the International Olympic Committee in 1896, one Pierre de Coubertin, who wanted a distance to challenge competitors but inspire them by tales of heroism.

According to legend, the Greeks had been fighting with the Persians in 490 BC, and defeated them at Marathon. Some general or other decided that the good news had to get back to Athens as quickly as possible, so he chose Pheidippides, a messenger who had just come off the battlefield, to relay the victory back to those waiting at home. 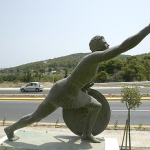 The unfortunate Pheidippides obviously caught the sense of urgency from his boss, as he decided to run the almost 26 miles back to Athens without a rest. He got to the assembly, declared, ‘we have won,’ and promptly dropped down dead on the spot. Very unfortunate. As an aside, his last words in Greek were: “Nike! Nike! Nenikekiam” – the global athletics brand was named after the goddess of victory, so it’s possible this story was also an influencing factor.

The Greek historian Herodotus claimed that the messenger was sent from Athens to Sparta to ask for help, a 300-mile round trip, and of course there’s no way of knowing the truth. If Pheidippides did actually rush from Marathon to Athens, he would have had to get round Mount Pentelicus somehow, running round it to the south or north.

The southern route, as used in the 1896 Olympics, is a distance of 25 miles, and gently slopes towards Athens. Another proposed route is that he climbed the slopes of the mountain and then downhill to Athens. This trip would have only been 22 miles, but obviously much steeper. Whatever the real story is, the legend has been enough to inspire distance runners for more than 100 years.

It wasn’t just the men in Ancient Greece who were running – in 776 BC, young women competed in footraces in honour of the goddess Hera, known as the Herean Games. But while they were allowed to race against each other, they were barred from entering the Olympic Games themselves, and married women faced execution if they even went to watch.

When de Coubertin revived the competition as the modern Olympics, the exclusion still stood. The day after the first marathon was run, a Greek woman called Stamata Revithi ran the course, but she was on her own. Women were allowed to compete only in same-sex events.

In 1922, Paris played host (or should that be hostess?) to the Women’s World Games, and six years later women were invited to compete in running events at the Amsterdam Olympics. Unfortunately, the Committee decided that the 800-metre race put too much strain on women’s bodies after ‘women collapsed.’ Footage unearthed much later revealed that only one woman fell, and quickly got up again, but the ban held until 1960.

In 1926, Englishwoman Violet Piercey set a women’s record for marathon running, but it was deemed that she’d run unofficially, as she wasn’t actually participating in an organised race (and wouldn’t have been allowed to compete anyway). A decade later, at the age of 46, she ran in the Polytechnic Harriers race from Windsor to Stamford Bridge, but was again declared unofficial. 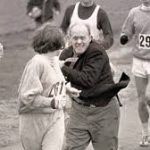 In 1967, athlete Kathrine Switzer ran the Boston Marathon after her coach told her she was too fragile to do it. She had an official number, but had actually registered under her initials rather than her full name. Race official Jock Semper wrestled with her when he spotted her midway through the race, but her boyfriend knocked him to the ground and she was able to complete the marathon. It would be another five years before women were allowed to participate.

Mental Itch: The History of the Running Shoe
Live Science: Why are Marathons 26.2 Miles Long?
Runner’s World: A Hisory of Women’s Running