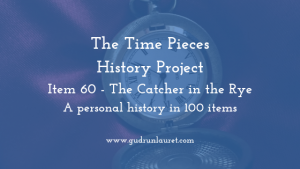 First time on the blog or new to the Time Pieces History Project? Find out what it’s all about here, and then come back to this page for today’s item – JD Salinger’s The Catcher in the Rye.

The Catcher in the Rye – Introduction to Item 60 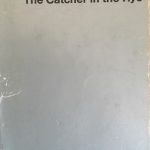 We moved house when I was 14. I was hovering in the hall, ‘helping’, when a box of books appeared from the van. I can never resist a pile of books, so I got straight in, and found The Catcher in the Rye on the top. I was intrigued by the plain silver cover, and sat down on the stairs to read.

Salinger’s books were always printed with blank covers, which was no doubt a ploy of the surly author to put people off – who wants to read a novel they know nothing about? It didn’t work on me though, because I’m too nosy!

I was immediately drawn into Holden’s world, despite it being completely unfamiliar to me, and fascinated by the freedom he had to have such strange adventures. Like many teenage readers before me, I was, of course, also hooked by Holden’s angst and frustration with his life, his family and his future.

I know that people who read The Catcher in the Rye as adults (my husband included) fail to be moved by our protagonist’s plight and really can’t see what all the fuss is about. Those universal themes of isolation and uncertainty that resonate when you’re young are obscured as an adult reader by the other themes which are almost impossible to relate to 60 years on and across the ocean.

However, on rereading it, possibly for the first time since I was a teenager, I really felt for Holden. What’s significant in the novel is not what he does, but what he tells us about his life. He’s from a wealthy background and sent away to school, which he doesn’t enjoy, and his younger brother, who he was very close to, died a couple of years before the story begins, which is something he obviously hasn’t recovered from.

The Plot of The Catcher in the Rye

From his sanitorium bed, 17-year-old Holden Caulfield details the events leading up to his admission. Kicked out of his fourth prep school for failing most of his subjects, Holden describes his experiences at Pencey, introducing us to his arrogant roommate, annoying neighbour and his favourite lecturer.

After spending a Friday night with his friends, Holden decides to go home to New York City. However, because school doesn’t break up for Christmas until Wednesday and he’s trying to avoid his parents, he spends a few days on his own, having a series of misadventures which culminate in his breakdown.

On the first night, Holden leaves school in the middle of the night and checks into a hotel. Over the course of the

weekend, his mental and physical health deteriorates rapidly. He spends several hours at the hotel bar, chatting up a group of girls on a break.

He goes to a nightclub, before having an unfortunate encounter with a prostitute and her pimp back at the hotel. He wanders around Central Park, meets an old girlfriend for a disastrous date, and then sneaks into his own home to spend time with his little sister. After a former teacher makes an inappropriate advance, Holden spends the night on a bench at the train station. The following day, he finally succumbs to his illness, which is where the novel ends.

What Does ‘Catcher in the Rye’ Mean?

The novel’s title is confusing, and it’s a reasonable question to ask. Fortunately, Salinger does help us out, although the explanation is still somewhat unsatisfactory. A recurring theme/dream is Holden’s desire to be a catcher, as he explains to his little sister, Phoebe. 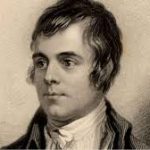 As it turns out, they’re both wrong – Robert Burns wrote the poem ‘Comin’ Thro the Rye’ and uses the line ‘gin a body meet a body’, with the suggestion that ‘gin’ means ‘should’. The verse is written in Scots dialect, and as it was published in 1782, there’s some debate over what it’s actually about, but most people agree it’s about an encounter between a man and a woman in a field – not quite as naïve as Holden imagines.

The History of the Carousel

While trying to get his life together, Holden takes Phoebe to the zoo and lets her ride the carousel, even though it’s raining. At the most basic level, a carousel is a rotating platform with seats for riders to use. These are usually animal-shaped, most often horses. The word comes from the Italian ‘carusiello’, via the Latin word for a two-wheeled wagon – ‘carrus’. A carusiello was a game knights played, either on horseback or in chariots and dates to the 1600s.

In the 6th century, the Byzantines and Arabs had baskets in which people sat, attached to a central pole, although 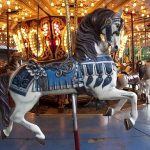 how this worked is not quite clear. In the 12th century, Arabian and Turkish horsemen used a training tool based on the carousel to help them train for battle.

Over time, the mechanism was used to create a fun ride, with Salem, Massachusetts home to the first wooden carousel, in 1799. In 1861, a steam-powered carousel was invented for the Aylsham Fair by Thomas Bradshaw. In 1870, the traditional ‘horses moving up and down’ style was pioneered by Frederick Savage. Carousels became popular throughout Europe and across the United States.

However, the platform itself wasn’t introduced until the mid 19th century. Featuring chariots and animals, the seats were attached to a circular floor, suspended from a pole in the middle and rotated manually by ponies or whoever was in charge of the ride.

Back to New York; this time to the famous train station, where Holden spends a night while on the run. Grand Central has appeared in several films, including the dramatic shootout on the stairs in The Untouchables.

As we saw with the history of Central Park, New York went through a period of rapid growth and prosperity in the 1800s, which led to a demand for better housing, art galleries, museums and leisure facilities. Obviously, this meant there was a need for a good transport network, for moving both goods and people. The City’s first rail line, built in the 1830s, went from the Harlem River to Prince Street, and more lines were added.

However, within 20 years steam engines were causing pollution, which led to the city’s bosses banning them from anywhere below 42nd Street to limit the damage. Trains were obliged to uncouple from the engines and use horses to tow the carriages into the town centre.

42nd Street soon became a central hub, and three local train companies pooled their resources to make a more permanent base there. Local tycoon Cornelius Vanderbilt played a big part in this decision. In 1871 the Grand Central Depot opened, and in 1901 it doubled in size to accommodate the increase in train traffic. 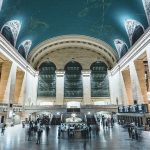 However, it was apparent that the station wasn’t up to the job, so as with Central Park, a competition was launched to find an architectural firm to build a replacement. Reed & Stem proposed a road that wrapped around the building to connect the two sides of Park Avenue, but they had to collaborate with Warren & Wetmore, who proposed three arches on the exterior. This was particularly annoying as they weren’t even in the original competition.

Nevertheless, work began and Grand Central finally opened in 1913. Chandeliers were added to the waiting room, two types of marble were used for the floors and walls, bronze carvings were crafted by Parisian artist Sylvain Saliéres, and the Oyster Bar was built with tiled, vaulted ceilings.