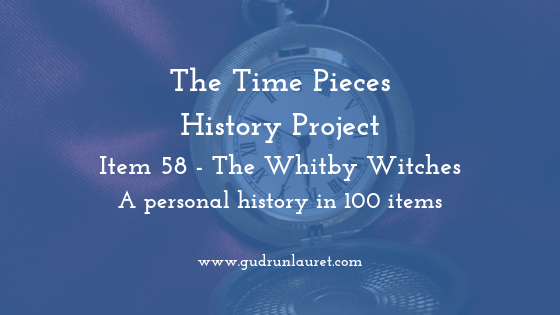 First time on the blog or new to the Time Pieces History Project? Find out what it’s all about here, and then come back to this page for today’s item – Robin Jarvis’ The Whitby Witches.

The Whitby Witches – Introduction to Item 58 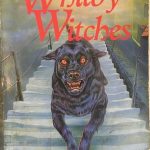 This book was published in 1991, and I remember my dad bringing it home for me. We agreed that if I read it all and liked it, we’d go on a trip to Whitby to tour the locations in the novel. I didn’t need any incentive, of course, but it was something to look forward to. In the end my parents read it too, and were more excited than I was to show me round the town.

I read the other two books in the Whitby trilogy, which took an even darker turn than the first (that is possible, believe me!), and when Jarvis published his Wyrd Museum series, I couldn’t wait to get hold of them. The setting is completely different, but the stories have similar themes – displaced children, changing times, peculiar grownups and a dark, supernatural force to overcome.

While researching this post I discovered that a new series set in Whitby came out a couple of years ago, so when I’ve reread the other two in this trilogy I’ll be off to get myself the new stories too.

The Plot of The Whitby Witches

Orphans Jennet and Ben have been placed unsuccessfully with several foster homes before moving to live with the friend of a great-aunt. Alice Boston lives in Whitby, a town which immediately enchants both children. ‘Aunt’ Alice is in her 90s but seems younger, and encourages her young charges to explore their new home.

But while Ben and Jennet quickly feel settled with Alice, things aren’t perfect. Ben sees ‘visitors’ (ghosts) which has 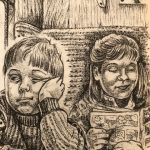 Ben and Jennet, as drawn by Robin Jarvis

caused them problems in the past, and Alice and her friends are caught holding a séance, which worries Jennet. Then the mysterious Rowena Cooper arrives in town to open an antiques shop, and Alice’s suspicions are aroused.

Rowena forces her way into the ladies’ circle and soon causes chaos amongst its members. Jennet is plagued by the howls of a big black dog, and has a closer encounter than she would have liked. On top of that, she, Alice and Ben all have separate encounters with the nervous new novice at the convent – Sister Bridget, who keeps herself hidden whenever she can but knows more than she lets on.

Meanwhile, Ben has met the Aufwaders – Hester, Nelda and Tarr are part of a small tribe, the last survivors of an ancient race of fisher folk. Normally invisible to humans, the Aufwaders are cursed to die out, but Nelda thinks Ben can help them find the moonkelp, a treasure from the deep, and save them all.

Much of the action in the novel (and the other two) takes place around the ruins of St Hilda’s Abbey, which looms over the town at the top of East Cliff and is reached by a winding set of stairs – 199 in total. Believe me, you’ll feel it by the time you’ve scrambled up them! 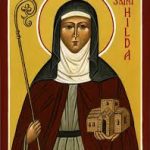 The Abbey is named after Hild or Hilda, who was in charge of several monasteries in the mid-600s. She was active in introducing Christianity to the Anglo-Saxons, and her advice was sought by kings from across Britain. Local lad Bede (the Venerable) documented much of her life in his ‘Ecclesiastical History of the English People’, published in 731.

Born in 614, Hilda was related to King Edwin of Northumberland and brought up at his royal court. Her father was exiled to the court of one King Elmet, in West Yorkshire, and was poisoned while there. Edwin’s second wife was a Christian, and after their marriage had his entire retinue baptised, including Hilda.

Hilda spent a brief period as the Abbess of Hartlepool Abbey before founding a monastery for both nuns and monks in Whitby in 657 AD. The Visit Whitby website says that the community was not celibate, and in fact families lived together and worshipped at the wooden church.

Apart from introducing Christianity to the area, which you’d think would have kept Hilda busy, she even found time to kill all the snakes in town by throwing them off the Abbey Cliff. She was so enraged by these evil creatures that they turned to stone (ammonites). 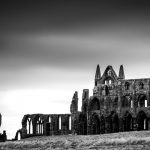 Celtic beliefs. Oswiu of Northumberland played a key part in the Synod. As with the priories at Lindisfarne and Tynemouth, the Abbey was raided by the Vikings and it was abandoned in the 9th century. Reinfrid the monk re-established a monastery at the site in 1078, and a stone church was built in 1100.

Work began on a Gothic church in 1225, although money ran out before it was completed, with the nave only being finished in the 1400s. After Henry VIII’s suppression of monasteries it was abandoned, finally falling into ruins in the 1800s, after centuries of wind and rain took their toll.

In Bram Stoker’s 1897 horror novel, Dracula, the Count travels from his home in Transylvania in search of new blood, and arrives at Whitby by boat. The captain of the ill-fated ship leaves a log which describes how his crew disappeared one by one, and as the boat runs aground, a large black dog is seen leaping from it. 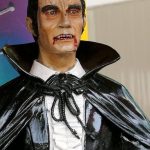 Stoker was inspired by a stay in the town, as well as stories of Vlad Tepis, and was so impressed with the Abbey that he had Dracula (in dog form) run straight up the stairs to the top of the cliff. The unfortunate (if feeble) Lucy Westenra is chosen as his first victim, and as part of her decline, starts sleepwalking, including, one night, to the graveyard of the Abbey.

Dracula visits Lucy every night, and drains away a little more of her blood. Despite Van Helsing’s best attempts, Lucy dies and becomes a vampire. Stories are told of children being followed by a beautiful lady, leading Van Helsing to chase down what’s left of Lucy. Clearly not leaving things to chance again, he stakes and beheads her, then fills her mouth with garlic. After this, the setting moves on to London and back to Transylvania.

Whitby is also famous for its jet, although there are several shops selling beautiful pieces just down the road at Robin’s Hood Bay, which is also worth a visit. I had a pendant of it myself at one stage, although I’ve no idea where it is now. I’d better get down there for some more!

Jet is found in shale seams all along the North Yorkshire coastline, and cliff erosions expose it, making it easy to dig 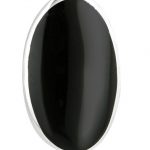 out. In the Victorian era, demand for jet was so high that mines were established, and the first workshop opened in 1808. Tunnels were dug throughout the cliffs, with a new one bored when the previous one was exhausted, but still demand couldn’t be satisfied. In 1870, jet was imported from Spain, which was much softer and more brittle.

Jet is 180 million years old, formed from sediment build-up applying massive amounts of pressure on dead Araucaria trees, washed into the sea by flash floods in the Jurassic period. The hydrocarbon oil in the mud was absorbed by the wood, and chemical changes resulted in the formation of the black, shiny gemstone the Victorians loved so much.