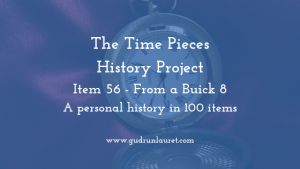 From a Buick 8 – Introduction to Item 56 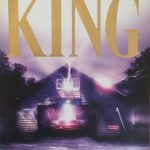 This is not the first Stephen King novel I read; I think a schoolfriend lent me Firestarter when I was 13 or 14, and I was hooked. I’m the proud owner of the original The Green Mile, published in six slim volumes to mimic the episodic style in which Dickens’ stories were first introduced to the world.

I chose this one, though, because it contains many of the elements of what makes King’s writing so spinetingling and disturbing – an everyday object (in this case the car; in others, a nurse, a husband) made terrifying, an ordinary suburban landscape, people trying to live everyday lives.

Depending on his mood, King creates straightforward horror (Salem’s Lot), fantasy (The Dark Tower, parts of Rose Madder) or a story where there’s very little obvious scary stuff at all (Joyland). Whatever he writes, I am unable to put it down. I read this book in two days one summer, and couldn’t concentrate on anything else until I was done.

The Plot of From a Buick 8

A vintage, mint-condition Buick pulls up at a gas station on a sunny day in 1979. As the attendant starts to fill it up, the owner walks around the back of the building and vanishes. When the police tow it away later, they find that things aren’t as they appear, and the Buick is not really a car at all – it just looks like one.

Trooper Curtis Wilcox, who was first on the scene, finds himself instantly mesmerised by the Buick, and is obsessed by trying to unravel its mysteries. When his partner, Ennis, disappears from the police barracks, Curtis is convinced that the car is somehow responsible.

22 years later, Curt has died suddenly and tragically in a road accident. Looking for answers and trying to feel close 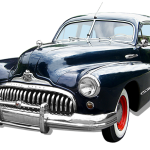 to his father, Ned Wilcox, Curt’s teenage son, starts doing odd jobs around the barracks. After finding the Buick in a shed one day, Ned asks his father’s colleagues about it, and Sergeant Sandy Dearborn decides he has a right to know about the awful history of the car.

The shed and the Buick are always cold, even on the hottest days, and every so often the car illuminates the shed with an inexplicable light display that’s similar to a silent firework display. Gerbils, frogs and plants left inside the car sometimes disappear.

Worse, though, are when things come out of the trunk. Monstrous creatures, usually dead or dying, and looking more like lab experiments than anything that exists in this world, climb into the shed and give off a revolting stench. Despite dissection and study, Curt was never able to explain what these things were, and his son is determined to find the answers, no matter what the cost.

The History of the Car

Despite what we’ve been led to believe about Henry Ford, the automobile was actually invented in Europe, with both German and French engineers working on early versions as far back as the 1800s – Daimler, Otto and Benz were all involved in manufacturing vehicles.

The History website explains that the Daimler Motoren Gesellschaft company built a Mercedes in 1901, which reached 53 miles per hour from a 35-horsepower engine. Within eight years, the company employed 1,700 workers, although they manufactured comparatively few cars. 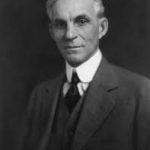 However, by the 20th century, the Americans were dominating – the ‘Big Three’ producers were Chrysler, General Motors and Ford, with the latter pioneering mass production. All car makers worked together during the Second World War, pooling their resources to produce all kinds of vehicles. Post 1945, the Japanese entered the marketplace.

Rather excitingly, Encyclopaedia Britannica has gone further back in time, citing numerous sources of inspiration, both from ancient times and the Renaissance. Homer’s Iliad describes the god Vulcan making 20 tricycles in one day, which could be controlled by the will of his fellow deities. And of course, that great polymath, Leonardo da Vinci, posited a self-propelled vehicle in the 15th century.

Wind power inspired several inventors to harness moving air to power vehicles, with a Swiss cleric using small windmills on a cart, and wind carriages being used in The Netherlands in the 1600s. amateur scientists also experimented with clockwork, steam, air pumps and coal-gas.

In 1769, an artillery officer by the name of Nicholas-Joseph Cugnot developed a steam-powered tricycle which moved at just over two miles per hour and carried four passengers. You could argue that this was the first successful automobile, which inspired all manner of other vehicles.

One of the main supporting characters in the novel is police dog Mister Dillon, who, like many animals, can sense when something is going to happen in and around the Buick. Mister Dillon was rescued as a puppy and adopted by the troop, so he wasn’t an officially trained police dog. Nevertheless, he often helped the officers in their cases.

It turns out that, much like automobiles, dogs have been in military service for far longer than we might think. Homer and Herodotus both refer to dogs helping in the invasion of Greece by Xerxes in 479 BC and 4th century Spartan sieges.

Of course, dogs have been assisting humans for centuries before that, so it’s probably not surprising that they were 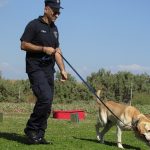 co-opted into battles too. The ancient Romans used dogs for protection of livestock and the home, and some legions bred Molloser, which were similar to a mastiff and were used both for scouting and to fight, equipped with armour and spikes.

In Europe, dogs were used by the newly-emerging police forces. Bloodhounds were the dog of choice for British policemen, and were used (admittedly unsuccessfully!) in the hunt for Jack the Ripper at the end of the 1800s. In Belgium, particularly Ghent, highly-trained sheepdogs and wolfhounds were introduced and became a huge success in the early 1900s, and Germany followed suit soon after, using both Alsatians and Dobermans.

In America, dogs were used by the military in the Second World War, and for sentry duty and tunnelling during the Korean and Vietnamese wars, and in modern times they have been used to sniff out fugitives and IEDs (improvised explosive devices).

As of last year, there were approximately 1,600 dogs working for the US Department of Defense. Many of these are Belgian Malinois and German Shepherds, but smaller dogs such as Jack Russells are ideal for submarines, and Labradors are used for detection.

History: Automobile History
Britannica: The History of the Automobile
CNN: Dogs in the Military