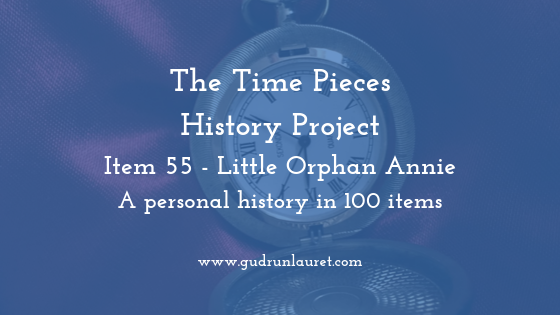 First time on the blog or new to the Time Pieces History Project? Find out what it’s all about here, and then come back to this page for today’s item – Harold Gray’s Little Orphan Annie.

As I mentioned in blogs 14 and 20, I spent a lot of time as a little girl with my babysitters and adopted grandparents, Margaret and Dennis. I had a collection of videos I’d watch over and over, including Thomas the Tank Engine (as voiced by Ringo Starr), and the original version of the film Annie, starring Albert Finney as Daddy Warbucks.

I was so obsessed with the film that when a touring stage production visited both Newcastle and York, my enthusiasm persuaded both my Grandma and Margaret to take me to see it. I don’t think I let on that I saw it twice, and just enjoyed the treat of being taken to the theatre.

The Plot of Little Orphan Annie

In the film, Orphan Annie lives in a home for girls, ruled by a drunken tyrant, Miss Hannigan. Miss Hannigan clearly has issues, which she takes out on the girls, forcing them to perform household chores and spoiling all their games – fun isn’t really allowed.

Orphan Annie began life as a daily cartoon strip in the New York Daily News in 1924, and the books are a 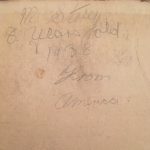 compilation of a number of these strips, detailing one full story. This book, “A Willing Helper”, was sent to Margaret by an American relative when she was a child, and it was safely wrapped away most of the time – I was allowed to read it under supervision.

We regarded the story as the sequel to the film, and it was only many years later, when Margaret allowed me to keep the book (as an adult) and I started looking further into it, that I discovered there was a whole series of books out there. I never had the heart to tell her, because it was such a precious gift.

The story details Daddy Warbucks in financial difficulties and his mansion burning down, leaving he, Annie and Sandy (the dog) homeless. The trio end up in a grotty apartment, and Annie finds herself a job at a grocery store. Embarrassed that he’s being kept by his daughter, Warbucks leaves Annie home alone (which seems a bit of an odd thing to do to an 11-year-old) and takes a job as a truck driver. 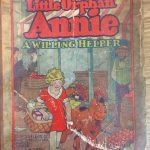 On his test drive, he swerves to avoid a small child and crashes into a pole. Warbucks miraculously survives, but he’s told he’s permanently blind. Undaunted, he goes into business with the midget ‘Flophouse Bill’ and restores his fortune, as well as getting revenge on the men who betrayed him.

Annie, meanwhile, is still living in the apartment and working at the shop. One night, she finds a toddler on the steps and adopts her. In this rather bizarre turn of events, she names the child Cleopatra, Pat for short. Pat gets sick with an unnamed disease and Annie approaches the first doctor she finds.

The doctor cures the toddler and takes both children to live with him. Annie then uncovers a kidnapping plot, overhearing a couple discussing their plans. This seems to come from nowhere and doesn’t fit the rest of the storyline. The book ends with Pat being returned to her parents, Daddy being found by Annie, having long-shot surgery performed by the doctor to restore his sight, and living happily ever after with Bill, Annie and Sandy.

Cartoonist Harold Gray says he based Annie on a child he met in the street, taking her name and streetwise nature and making his character an orphan. Most comic strips of the time had boys as the main character, so Gray took a leap with Orphan Annie. Rereading the book now, 80-odd years later, I find it hard to believe that it was ever intended for children to read at all. 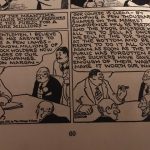 Warbucks’ business enemy, JJ Shark, plots to make himself richer at the expense of others.

The strips covered considerably more adult themes than the 1982 film, including the Second World War, Communism, political corruption and the Great Depression, which ‘A Willing Helper’ appears to touch on, as it was published in 1932.

In the first set of strips, Orphan Annie is taken from the orphanage by Mrs Warbucks, who’s snobbish and nouveau riche. However, this is for a trial period, so Mrs Warbucks decides to return the girl, as she hasn’t fit in with the household.

Spotted by a friend, she’s shamed into keeping Annie and taking her home again, where her husband Oliver protects her as much as he can from his wife. However, as Daddy is frequently away from home on business, Mrs Warbucks sends Annie back to the orphanage whenever she gets a chance. Annie then escapes to have adventures with Sandy before being reunited with her father.

While Gray claims his inspiration for the character of Annie came from a street urchin, he was probably also influenced by the 1885 poem ‘Little Orphant Annie’ by James Whitcombe Riley. Originally titled ‘The Elf Child’, Riley then changed it to ‘Little Orphant Allie’, but a misprint ended up naming the child Annie instead.

The poem explains how Orphant Annie arrives, ostensibly as a dogsbody, but really as a ‘conscience’, at the narrator’s home. Once she’s done all of her chores, she tells the children of the household all about the “Gobble’uns’ who take away naughty boys and girls.

The rest of the poem details bad behaviour that children might consider, and warns them of the consequences if they do. This sort of morality tale was common in Victorian times – I remember reading similar, contemporary short stories when I was young, and being horrified by them.

The cartoon strip style, and Annie’s frequent wanderings, also owe something to the ‘picaresque’ novel. Using a first-person narrative, the stories follow the adventures and trials of a rogue or lowborn man (from the Spanish ‘picaro’)  as he makes his way through life. 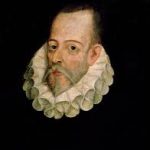 These early novels are similar to the medieval stories of knights, but the picaro is a scoundrel rather than a hero, ‘who, if given half a chance, would rather live by his wits than by honourable work.’ Of course, Annie is not like this, but her story is similarly told in episodes.

The first of these novels was published in Spain in 1554. Lazarillo de Tormes tells the story of Lazaro, a poor young boy forced to work for a series of dishonourable men. Later works built on the irreverent style, ultimately inspiring Cervantes in some of his short stories, but by the mid-1600s they fell from favour when adventure novels became more popular.