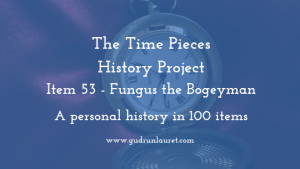 First time on the blog or new to the Time Pieces History Project? Find out what it’s all about here, and then come back to this page for today’s item – Raymond Briggs’ Fungus the Bogeyman.

Fungus the Bogeyman – Introduction to Item 53 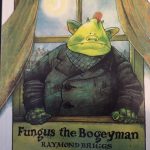 Author Raymond Briggs is probably best known for The Snowman, the bittersweet tale of friendship and adventure. Its popularity is also down to the animated film that came out in 1982, and the haunting, mournful theme song, made famous when Welsh chorister Aled Jones released it as a single. He didn’t perform it in the original film, though.

I always preferred Fungus the Bogeyman, which I read frequently at my grandparents’ house. Perhaps Fungus’ dirty ways appealed to me, or because the illustrations of his underground lair were so interesting. And the story is not just for Christmas (sorry) – you can read it all year round.

The Plot of Fungus the Bogeyman

Fungus the Bogeyman lives in the below-ground Bogeydom, which is damp and slimy. His wife, Mildew, affectionately calls him ‘my dreary.’ A homemaker, Mildew has three breasts, webbed fingers and sparse hair she curls by sleeping in rollers.

Fungus has a bright red tuft of hair on the top of his head, with a small horn on either side. He also has three nipples, a fin, small fangs and a long, frog-like tongue. He washes in dirty water and then splashes on ‘Old Mice’ cologne. The couple have a son, Mould, who eats flaked corns with lumpy green milk for breakfast.

The first portion of the book follows Fungus on his commute to work on the surface (where we humans live), which takes him past many of the peculiar sights of Bogeydom and introduces us to the game of pig-sticking. We also see the Patty Man, whose job it is to collect and stack cowpats. 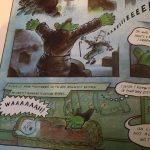 go bump in the night. We watch him go round the town, startling vicars and giving people boils, kicking tiles off roofs and rattling the doors.

Although good at his job, Fungus is questioning what the point of it all is, and if there’s more to life. We follow him home via the outt (the bogey version of an inn!) and see him ponder just why he’s a Bogeyman over a pint of slime. He’s very definitely in the middle of a crisis.

And that’s it. There’s not really a storyline, more a series of amusing descriptions of life in Bogeydom. The book is incredibly detailed – Briggs has created a whole new vocabulary for the Bogeymen, and invented all kinds of objects only found in their realm.

They ride uncomfortable bikes, sleep in beds full of slugs and keep their clothes damp in ‘waterobes’. We learn that they’re very polite and softly-spoken, move slowly and enjoy visiting the art gallery at the weekend to look at tear-jerking scenes. Their world is full of bizarre creatures, which live in their finger webbings, their bike tyres or in their Bogeybags, and all of it has been lovingly crafted for us to enjoy.

Briggs was born in Wimbledon, so I imagine that the world Fungus inhabits is another level below the London Underground. I don’t visit the capital very often, but I’ve always been fascinated by the tube stations, particularly those which retain the original Victorian tiles and fixtures. And of course, because of the memorable scene in one of my favourite films – An American Werewolf in London. I won’t spoil it if you haven’t seen it!

The London Underground, a rapid transit system, was founded in 1863 and was the first underground passenger railway in the world. It was born from necessity – the city had grown rapidly throughout the century, and there were seven railway lines coming in and out of the city, along with road traffic. Clearly, a solution was needed to deal with the increasing footfall into London. 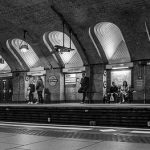 The Metropolitan Railway secured the right to build an underground line in 1854, which they estimated would cost £1 million. However, they struggled to raise the capital as the Crimean War was raging on, so they didn’t start construction until 1860.

It took almost three years to put in the railway, which stretched just under four miles and went from Paddington to Kings Cross, with some of it through tunnels. Steam locomotives pulled wooden carriages and transported 38,000 passengers on that first day.  Politicians were given a tour of the new railway, although PM Lord Palmerston declined, as at the age of 78 he wanted ‘to spend as much time as possible above ground.’

Thanks to the success of this first line, the government agreed that more should be put in, to connect with the existing, above-ground terminals as possible. Over the next 50 years, much of London and its suburbs were connected by rail, although it’s worth noting that different companies took charge of the construction of different parts of the route. It was not until 1902 that the Underground Electric Railways Company of London began buying the disparate companies and brought everything under central control.

If Fungus ever took a holiday, I imagine he would probably enjoy exploring the underground rivers of London, a no doubt damp and squelchy experience. The notion of the great city sitting above a network of rivers is both unnerving and thrilling.

London was built on the River Thames’ floodplains, which has countless tributaries flowing into it. As the city expanded, buildings were constructed over the top of these waterways, but nothing was done to cover or block them, and so they still run on. 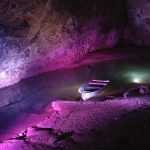 The ancient Romans relied on the Walbrook to provide them with fresh water – the Bank of England are now on top of it. The river Tyburn, a favourite salmon-fishing spot, flows beneath Buckingham Palace. And the hundred-foot-wide Fleet, once thought to have healing powers, became polluted as London developed and slums lined its banks.

Sad trickles of the Fleet remain, with a stream at Hampstead and Highgate Ponds you can follow. In 1827, locals bathed on the banks of the Fleet at St Pancras Road, but soon after it was turned into a sewer – the fate of many Thames tributaries – and now runs below ground to Blackfriars Bridge.

The great thing about a bogeyman is that there’s no hard and fast rule on what one looks like, or what they do. So if you want a green, slimy, softly-spoken bogeyman having an existential crisis below-ground, you can. And if you want to create a thing of nightmares to terrorise your children, you can do that too.

The first documented reference to a bogeyman (or boogeyman, depending on where you live) was in the 1500s, but the notion has probably existed for a lot longer. Every country has a similar legend, so it’s impossible to agree its origins, although it’s likely that it was a stand-in for the hobgoblin. 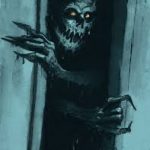 Usually cheeky, some of them were less friendly, and hobgoblins were known to cause all sorts of trouble, including frightening you to death. This made them an ideal creature to threaten a naughty or disobedient child with, as the bogeyman would come and take them away quite happily. In some countries, he will pick up anyone who’s ‘bad’, regardless of age.

There is a notion that in Britain, the term bogeyman came from the ‘buggy men’, whose job it was to collect bodies of plague victims and the deceased. I’d imagine they had a cart or some sort of body to sling the corpses into as they went around. These poor unfortunates were made unwell by their proximity to so many diseased bodies, so often appeared wasted and with skull-like features.

TFL: A Brief History of the Underground
Amusing Planet: The Underground Rivers of London
Mythology: The Bogeyman