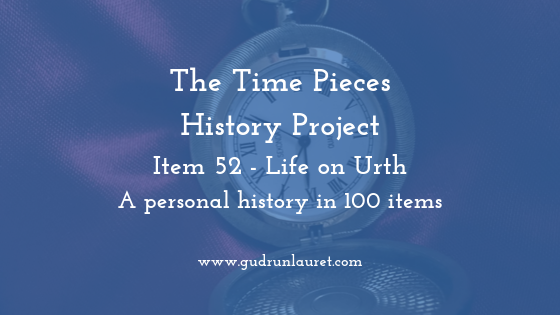 First time on the blog or new to the Time Pieces History Project? Find out what it’s all about here, and then come back to this page for today’s item – John Kirkbride’s Life on Urth.

Life on Urth – Introduction to Item 52 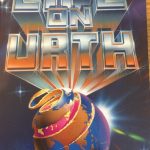 I bought this book about a decade ago, but I think I first read it many years ago. I’ve not been able to find out much on John Kirkbride, or seen any other books by him for sale, but I’d love to read a sequel to this one. It’s very funny, and I love the idea of parallel worlds.

When I reread it, I was quite surprised to see that Scholastic published it as a children’s book, as it contains several references to sex, and more puns than you can shake a stick at. Although it’s quite possible I borrowed it from the kids’ section of the library.

The Plot of Life on Urth

Reg and Jeannette are complete strangers who happen to live not far away from each other in Manchester. One morning, Reg comes out of his bathroom to find the rest of his house has disappeared. On the other side of town, Jeanette is heading out for the day, only to find the home beyond her bedroom has gone.

By a weird coincidence, they’ve both been gone through a gap into a parallel universe, and find themselves on Urth, which has some similarities to the planet they’ve just left, but also some peculiar differences. They’re each advised to visit Mahatma Cain, a seer who lives out in the desert, and meet at his cavern. They decide to travel together to find Roopert of Murdock (yes, really), who may be the only man who can send them home. 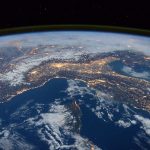 On the way, they travel over the desert with the Plainsfolk, exiled from civilisation because they’re made entirely of leather. They have to cross the sea to the Eastern Aisles, and are kidnapped by a slave trader, who whisks them off the boat they’re travelling on.

A daring escape, thanks to Mahatma’s invisible potion, leads them to the Garden of Nede, an encounter with a female outlaw by the name of Robyn Hudd and killer trees. And they’re pursued by the sinister Mortimer, who may or may not be in the employ of Mad Rolf Hilter. They may even discover why they arrived on Urth.

Jeannette and Reg are dragged off the ship taking them to Le Half by Black Nidge, a pirate and slave trader. He’s convinced he can make money by selling Jeannette, but has to take Reg too when she says she won’t go without him. While the pair escape their fate, others weren’t so lucky.

Jeannette and Reg are dragged off the ship taking them to Le Half by Black Nidge, a pirate and slave trader. He’s convinced he can make money by selling Jeannette, but has to take Reg too when she says she won’t go without him. While the pair escape their fate, others weren’t so lucky.

A professor at Ohio State University posited that over a million European Christians were enslaved by Muslims in North Africa between 1530 and 1780, along a stretch known as the Barbary Coast (Morocco, Algeria, Tunisia and Libya). Robert Davis carried out research that there were 1 million and 1.25 million in slavery in North Africa between the 16th and 18th centuries. 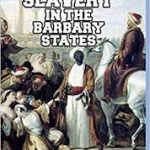 Barbary Corsairs were pirates who came over to Europe and hunted for ‘white gold’ – men, women and children they could sell for a fortune. During this period, the Christian world was at war with the Islamic Ottoman Empire, so anyone taken into slavery was treated particularly badly.

There was a real risk that anyone travelling around Europe could be kidnapped, but the pirates actually came into towns and took people. The Mayor of Plymouth said that over the summer of 1625, 1,000 villagers were taken as slaves, effectively wiping out most of the population.

Humans have been using leather almost from the beginning of time. Primitive man used animal hides to make tents, footwear and clothing, although the hides were a by-product from a food source. Half of all leather produced today is now for shoes.

Egyptian tombs have been found with objects suggesting that they were using leather for a range of things, including 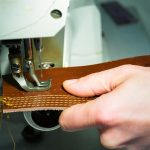 bottles and buckets, military equipment and even shrouds for burying the dead as far back as 5,000 BC. The Greeks used leaves and tree bark soaked in water and used it to tan and preserve the leather, and the Romans used leather in much the same ways as the Egyptians.

By the Middle Ages, leather craftsmen and professional tanners began organising themselves into guilds so they could control material supplies and maintain ownership of tools. The Industrial Revolution increased the need for leather goods, including to produce belts for machinery. With the invention of the automobile, softer leather was in demand to cover the seats

A Book of Human Skin

In the story, the Plainsfolk are afraid of being caught by humans who want to turn them into cushions. Anyone who has been to Auschwitz will have seen the case full of wallets and lampshades which the Nazis made from the skin of poor unfortunate people who passed through the camps.

In Newcastle City Library’s Local Studies collection, there is a book with a single page made from human skin. Author Vanessa Histon (in her book Ghosts of Grainger Town) explains that it was once part of the body of murderer Charles Smith, hanged in 1817. 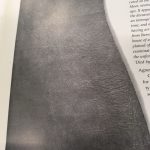 Smith worked for three potteries around the north east, the last of which went into bankruptcy at the end of 1816. The Sheriff’s office appointed a watchman to look after the premises, and in the early hours of the morning passers-by were alerted to his cries.

Inside the factory, the elderly watchman was covered with blood and a large hole in his head. He said he had been attacked by two men with Irish accents, which led police to Smith. It transpired that the evidence was circumstantial at best, but he was found guilty.

His corpse was flayed prior to dissection at the Barber Surgeon’s Hall, and a land surveyor, John W Bell, bought a piece of skin. He hoped to have a book bound in it, but couldn’t find anyone to do it. The volume, ‘Particulars of the Trial and Execution of Charles Smith,’ also contains papers he wrote in prison, an account of his trial and execution and a speech he gave as he was being executed.