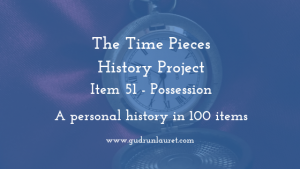 First time on the blog or new to the Time Pieces History Project? Find out what it’s all about here, and then come back to this page for today’s item – AS Byatt’s Possession. 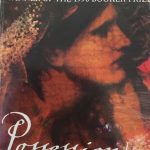 This is the first AS Byatt novel I read, and I’m guessing I bought it in a second-hand bookshop about a decade ago. I was immediately enchanted by the story, with its star-crossed poets and the devious world of literary researchers. Not least because I’d quite enjoy that life myself!

Since then, I’ve also read her retelling of the Norse legend of Ragnarok, and her quartet about the life and challenges of a female student at Cambridge in the 1970s. I always feel stupid when reading Byatt, because she’s so well-read and uses a lot of symbolism which usually passes me by, but she’s a captivating writer. As an aside, she’s the sister of novelist Margaret Drabble, although they have very different styles.

The Plot of Possession

Roland Michell is an impoverished postgraduate who lives with his girlfriend Val, an unhappy woman unsatisfied with most of her lot. Michell works as a researcher at the British, studying the life and works of the poet Randolph Henry Ash. One day, whilst going through some of Ash’s papers, he discovers rough drafts of letters to one Christabel La Motte, a minor poet and writer.

For reasons he can’t quite explain, he squirrels the letters away in his own notes, and sets out to find out more about the woman, and what she meant to Ash, a happily-married man.

Roland quickly finds Dr Maud Bailey, a scholar of La Motte’s work and one of her descendants. La Motte, he learns, was the daughter of a successful writer and crafted an epic poem based on a fairy story. She lived a quiet life with her female ‘companion’ and rarely went out into society.

Roland and Maud decide to work together to see if there was more to Ash’s letters to La Motte, and soon find that 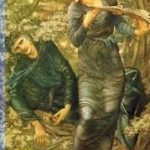 everything they thought they knew about their respective writers was wrong.

A chance meeting with a member of the other branch of Bailey relatives gives them access to the house where La Motte spent her last years, and from there they make a series of discoveries which leads them further into the truth about the two poets.

Along the way, they struggle to keep their findings a secret from their fellow researchers, who, they believe, would want to hijack the story. And there are nice parallels with the past and present blossoming romances, as well as poetry and prose a plenty.

When Roland visits Maud at Lincoln University, they ride in a paternoster lift. I had no idea what that was, so I went and looked it up. They are named for the rosary beads, which are in one continuous loop (and because you recite the Our Father – Paternoster – prayer as you tell them. 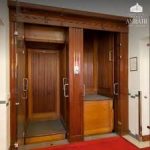 Essentially, the lifts are made up of little doorless compartments which endlessly circle from floor to floor in a building. There are usually two strands – one going up and one going down. When the lift arrives at your floor, step in, but be decisive about it!

They move fairly slowly, and were popular because they could carry more passengers than an ordinary lift. They were more popular in Europe than the UK, and there are many working examples overseas.

The first paternoster was installed in Oriel Chambers in Liverpool in 1868 by one Peter Ellis, although the first patent was granted in 1877 to Peter Hart, an engineer. No new paternoster lifts have been built since the 1970s as there are safety concerns around them, unsurprisingly. The BBC has a nice little video that shows how they work on their YouTube channel.

In the novel, La Motte and Ash meet at a gathering at the house of Henry Crabb Robinson. Unlike the poets, Crabb Robinson was a real person, known for hosting get-togethers for poets, writers and other literati of the day, he was 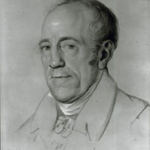 also an author himself, although much of his work is unpublished.

He was a great letter writer and diarist, and shared his thoughts on politics, Europe, religion and religious dissent, theatre and the law with his readers. He spent three years at the University of Jena in Germany, and is credited with introducing German thought to England.

He worked as a war correspondent for The London Times from 1808 to 1809, reporting on the Peninsular War, and from 1813-28 worked as a solicitor. He was a keen traveller and enjoyed walking (as did the fictional Ash) and did a walking tour of Switzerland with William Wordsworth.

Christabel La Motte is half-French, and ‘Possession’ has a lot of Breton mythology in it. Her epic poem Melusina is based on the myth of Melusine, a half-woman half-fish (or serpent), which the British Library describes as ‘one of the most compelling (tales about) female characters in medieval French fiction.’ The story is thought to date as far back to Celtic and Gallo-Roman myths, with the origin of the name coming from the Gaulish word for mermaids.

In some versions of the story, Melusine is the daughter of a fairy, Pressyne, and king Elinas of Albany (Scotland), and in others Melusine herself marries a king. In La Motte’s version, she marries a nobleman and lives happily with him for many years. In the first published version of the story, by 14th century French writer Jean d’Arras, the husband is named Raymondin.

Raymondin (or Raymond) comes across the Fair Melusina sitting beside a fountain in the middle of a forest. He instantly falls in love with her, and asks her to marry him. She agrees (which seems a bit sudden), with one condition – he must never observe her bathing.

The marriage is long and happy, with Melusine bearing Raymondin several children – in some stories, she has 10 boys, some with physical deformities. However, eventually her husband cracks and peeps through the door while she’s in the bath.

Spotting her tail, he is horrified, but says nothing, until one day he loses his temper and calls her a serpent. Furious, Melusina leaves the castle and swears never to return, sometimes taking the children with her. In other legends, she turns into a dragon and flies away, but comes back to visit her offspring, crying as she swoops around the towers.

In ‘Possession’, much is made of how the story represents man’s fear of the power of women, and their ability to ‘trick’ them. d’Arras’ story says that Pressyne had the same experience with her husband, and took her three daughters away. When Melusine and her sisters learn of this, they imprison him in a mountain. Variations of the legend appear throughout centuries, and Melusina is also thought to be the inspiration for the Starbucks logo.

The City of Ys

Despite all the time I’ve spent in Brittany, I’ve never come across the story of the drowned city of Ys. The city was built off the coast at Finistère, thought to be at the Baie de Douarnenez. In Breton, its name is Kêr Ys – ‘low city.’

Built on land reclaimed from the sea, the City of Ys was built by King Gralon, a pious man who would do anything for 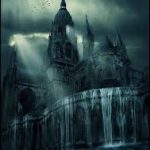 his wayward daughter, Dahud or Dahut. She is sometimes described as a sorceress, but at the very least she is frivolous and sinful. One night, drunk on wine, Dahud is persuaded by her lover to steal the keys to the dykes, opens the gates and floods the city.

Everyone is drowned, apart from the good King Gralon. He is supported by Guénolé, founder of the first monastery in Brittany at Landévennec. He encouraged the king to throw his daughter into the sea as a punishment, and in some versions Dahut is turned into a mermaid. Again, in ‘Possession’ this is a story of the folly of the pride of women and the damage they can cause.

The Henry Crabb Robinson Project: About
British Library: The Tale of Melusine
Oxford Reference: Legend of the City of Ys