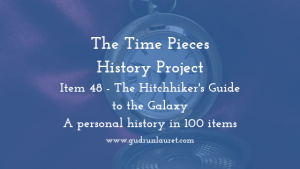 First time on the blog or new to the Time Pieces History Project? Find out what it’s all about here, and then come back to this page for today’s item – Douglas Adams’ The Hitchhiker’s Guide to the Galaxy.

The Hitchhiker’s Guide to the Galaxy – Introduction to Item 48 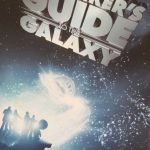 I first read the Hitchhiker’s trilogy (or quartet, or quintet, depending on your preference) when I was 18 or 19, after finding it on a friend’s bookshelf. It’s surprising I hadn’t come across it before, because my mum had heard the original radio shows. Since reading the books, I’ve caught bits of the TV series from the early 80s, but not bothered with the film.

Hitchhiker and its sequels have everything I like in a comic novel – memorable characters, incredible locations and fantastic inventions which make your life easier. Or harder, when they malfunction. It’s also very funny, and I find something new to appreciate at every reread.

The Plot of The Hitchhiker’s Guide to the Galaxy

Arthur Dent is an ordinary chap, who is quite satisfied with his humdrum life for the most part. One morning, he notices a yellow bulldozer parked outside – it has come to demolish his house to make way for a new road. Arthur has just settled in for some serious protesting about this when his friend Ford Prefect whisks him off to the pub to talk about something far more important – the destruction of the Earth. 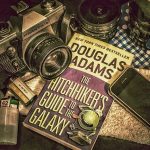 Escaping from the doomed planet in the nick of time, Arthur reluctantly follows Ford (who, it turns out, is an alien and a roving reporter for the Hitchhiker’s Guide) through a series of misadventures. They hitch a ride on a Vogon ship, where they’re subjected to the captain’s terrible poetry and sentenced to death.

Fortunately, an improbable coincidence means that they’re rescued by a passing spaceship, surprisingly manned by Ford’s semi-cousin, the two-headed, three-armed president of the galaxy – Zaphod Beeblebrox. Zaphod has stolen the ship, The Heart of Gold, and is on his way to find the mythical planet of Magrathea, in the company of a human woman called Trillian and a depressed, hyper-intelligent robot by the name of Marvin.

Arriving on the seemingly-abandoned planet of Magrathea, the crew split up to investigate – Ford, Zaphod and Trillian into the bowels of the earth, and Arthur ostensibly on lookout but actually wandering the surface. There, he meets an old man by the name of Slartibartfast, who tells him that the Earth was a custom-built planet.

The second most intelligent computer in the universe, Deep Thought, was built to find the answer to the meaning of life. Seven million years later, the answer (42, if you didn’t already know!) is presented, and Deep Thought informs its makers that they need to know the question to understand the answer. To find that, it developed the Earth as a computer.

The Hitchhiker’s Guide to the Galaxy is a travel guide, a spoof on the Lonely Planet and its ilk. It’s not the best example of the genre, as The Guide is written and updated by multiple editors, who include whatever they fancy. Ford is an editor, and has amended the entry on Earth from ‘harmless’ to ‘mostly harmless’, which is hardly enlightening.

The Lonely Planet began in Australia in 1972, after a married couple, Maureen and Tony Wheeler, did an overland trip from Europe, across Asia to Australia. The first guide, to travelling Asia on a budget, was 94 pages long and produced as a stapled booklet.

More countries were added over time, and the Wheelers sold the company to BBC Worldwide in 2007. Today, as well as the books themselves, you can purchase smaller volumes on specific regions within a country. There’s an app, a magazine (I’m a subscriber, and it always gives me wanderlust!) and a range of companion books on topics such as travelling in a mobile home. 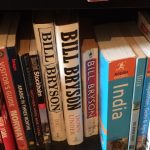 Of course, travel guide books existed long before 1972 – once people were actually able to leave their own country and visit another, they needed advice on how to do that, so in the 19th century writers helped them. However, while books for travellers are only about 150 years old, writing about venturing overseas to an unknown place and sharing experiences is much older, dating in fact to the ancient Greeks.

‘Periegesis’ means the action of being shown around by a guide (which can mean a book as well as a person), from the Greek words ‘peri’ – ‘surrounding’/’around’ and ‘hegisis’ – ‘command’/’leading’.

One such Greek writer was Pausanias. A geographer, Pausanias lived during the time of Emperor Hadrian and wrote the ‘Description of Greece’ in the 2nd century AD. He was born in Lydia (western Turkey) and travelled extensively. Works by Pausanias and others were translated into Latin, where they were no doubt extremely useful in the vast Roman Empire of the time.

The ancient Chinese, too, were fond of travelogues, and some date back to the Song Dynasty (960 – 1279). One of the most famous writers was Xu Xiake (pronounced “Syoo Syah-kuh”), born in 1857. Xu Xiake was a scholar, who decided aged 20 to leave his ordinary life behind to devote himself to the ‘love of the strange.’

He gave himself a pen name – ‘Traveler in the Sunset Clouds’ – and wandered his country for over three decades. 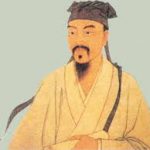 His writing style involved narrative and prose to describe what he saw. During the Ming Dynasty (1368-1644), trade was at a high, transport was safe and efficient and tourism was popular. Xu Xiake was able to take advantage of this to experience China.

In 1636, he set off to Yunnan province, at the foot of the Himalayas. This was notoriously difficult to get to at the time, and Xu Xiake was 49 – not a young man in the 17th century. He succeeded, and spent four years in the area, even going as far as the border of Tibet. Sadly, he died a year later, from malaria, leaving his unedited but remarkable travel diary behind.

Vogon poetry is notorious throughout the universe for being utterly terrible, and excruciating to listen to for everyone except its author. Unlike traditional nonsense rhyme, there’s no fun to be had from experiencing even a couple of lines of a Vogon poem, but it clearly owes a nod of recognition to the genre.

Nonsense rhyme, or verse, describes a form of poetry which uses made-up words, implausible characters in far-fetched situations, and is usually humorous. It is part of the wider genre of nonsense literature, something which dates back to the early 19th century. Children’s nursery rhymes are often nonsense (think of your own favourite or one you read to a little one!), although some, such as ‘Hey Diddle Diddle’ are classed as ‘gibberish’ instead. So there you go! 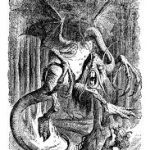 The most famous Victorian nonsense writers were Edward Lear and Lewis Carroll. Lear wrote many limericks, which at the time made far less sense than they do now. He was also the author of ‘The Owl and The Pussycat’, who went to sea in a beautiful pea-green boat.

Carroll’s Alice Adventures in Wonderland and sequel Through the Looking Glass are both great examples of nonsense literature, intended for children. Carroll’s poem ‘The Jabberwocky’, about the monster Jabberwock, appears in the second book, and is easily recognisable. While many of the books are for young readers, later authors such as Mervyn Peake wrote adult versions in the genre.