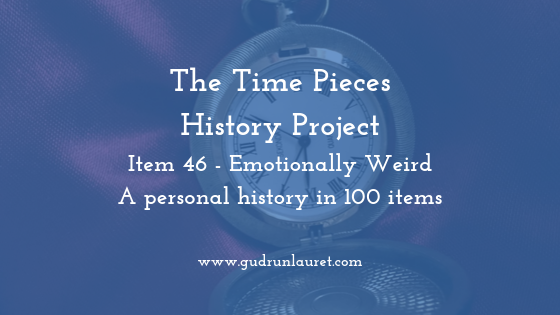 First time on the blog or new to the Time Pieces History Project? Find out what it’s all about here, and then come back to this page for today’s item – Emotionally Weird. 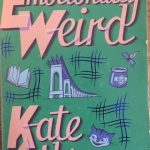 This is another author that I came to thanks to my mum – she bought a copy of this book in a train station and passed it on to me. As with Margaret Atwood, I quickly became a big fan of Kate Atkinson and bought most of her works.

Her early works are quirky and whimsical, like this one. She then created the tortured but likeable Jackson Brodie, who appeared in four detective novels, beginning with Case Histories in 2004. There is a fifth book on its way, and the BBC did an adaptation of the stories as well.

Her recent books have been set in and around the Second World War. Again, like Atwood, Atkinson writes about wide-ranging topics, and her style changes a little when she does. However and whatever she writes, I always enjoy it.

The Plot of Emotionally Weird

It’s 1972, and 21-year-old Effie is staying with her mother on a remote Scottish island while she recovers from a bout of the flu. Effie tells her mother the story of the peculiar events leading up to her illness, and is prodding a reluctant Nora to reveal more of her own history.

Throughout her childhood, Effie was constantly on the move, going from one seaside town to another. She knows she was named after Nora’s sister, who drowned, and her own first memory is of being underwater, but that’s all she’s been told. Her father is a mystery and she knows nothing about her Stuart-Murray ancestors.

An undergraduate at Dundee University, Effie is in danger of failing her English degree. She lives with her boyfriend Bob but isn’t too keen on him; Bob is happy to spend most of his time getting stoned with his pal Shug, and seems fairly unaware of the fact that he’s also a student, or even that he has a girlfriend. 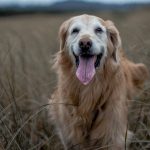 bolthole. Her best friend Terri, an aggressive American goth, joins in with most of her adventures, which include stealing a lecturer’s dog and attending feminist rallies, albeit reluctantly.

But everything is not as it seems – Effie is convinced she’s being followed; her English professors are fighting for the top job before the present incumbent has gone and she’s seeing a yellow dog everywhere she goes. Added to that, old ladies appear to be dying in suspicious circumstances, a seedy private detective keeps appearing beside her on the road, and it’s clear that Nora hasn’t been entirely truthful with Effie.

The book is very funny – Atkinson has created a vast, supporting cast of characters who leap off the page. There are the two old ladies who keep escaping from the old people’s home, the lecturers and their wives, and a host of fellow students who are interested in everything except their education.

The History of Dundee

While Effie and her friends don’t seem to think much of Dundee, it has a long and fascinating history. Evidence of Pictish inhabitants date back to the Iron Age, although the area was settled in the Mesolithic Era.

The name comes from Dun Dèagh – ‘Dun’ meaning ‘fort’. There is some debate about the ‘Dèagh’ though, with suggestions that it’s from the Gaelic for ‘fire’. This is quite possible, because at the time of the superstitious Picts, there was an active volcano near the fort. 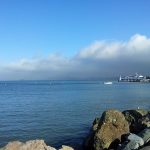 Other theories are that it comes from ‘Tay’,  or it’s named after a local ruler, ‘Daigh’, although there’s no other evidence of a man by that name. Finally, folk legends claim that it was once known as ‘Allectum’, and was renamed ‘Dei Donum’ (gift from God) in the 1200s.

In Medieval times, the port of Dundee was large and prosperous, and King William granted the town a charter in 1191 which allowed them to have their own local government. Grain and wine were imported, with wool and hides were major exports. Over the next 500 years the town was repeatedly sacked by the English, although it wasn’t all bloody – preaching Dominican Friars arrived in the 13th century.

As well as the wool trade, Dundee was a key location for fishing, and one of the country’s largest whaling fleets also had its base there. It was this that led to the development of the jute industry – a discovery that jute fibre could be missed with whale oil and woven into bags and carpet backing.

Dundee was made a city in 1892, and today is the fourth largest Scottish city (by population). It sits on the bank of an inlet of the North Sea – the Firth of Tay (which explains the name) and lies 40 miles from Edinburgh.

Scotland, like much of Britain, has a fine tradition of biscuits and baked goods, and Dundee itself gave us Dundee Cake. It varies from the traditional fruit cake as it has a lot more almonds in it. The top is always decorated with circles of almonds. Legend has it that Dundee cake dates back to the time of Mary, Queen of Scots. The 16th century queen wasn’t a fan of cherries, so a local baker adapted the fruit cake recipe to please her.

It was first sold on a mass scale by James Keiller and Sons, a marmalade manufacturer in the town, some time in 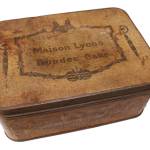 either the late 18th or early 19th centuries. Quite why they did this is unclear, but it proved to be extremely popular. In James Keiller’s time, the business was predominantly a grocery.

Scotland, of course, is also famous for its shortbread, with Walkers red tartan tins and boxes being the most recognisable. Walkers began in Speyside in 1898, where it’s still made today. 21-year-old Joseph Walker decided to make the world’s finest shortbread, and he was quickly successful. His children all joined the company, and by 1936 had a delivery van to reach more customers.

While the war slowed things down, the business continued to grow, and was eventually stocked in Harrods. Walkers is still a family-run business, and attribute their longevity in part to always using butter in their recipes, when their rivals were substituting margarine. They now ship their shortbread to 60 countries around the world.

Nora claims that she’s descended from William Wallace, amongst other Scottish warriors, a claim that remains unsubstantiated by the end of the book. Wallace is a national hero and made famous by Mel Gibson’s Braveheart (a film I actually haven’t seen, or at least not all the way through).

The National Wallace Monument website tells us that little is known about his life, although it’s thought he was born into a minor noble family in around 1270. In 1296, Scottish King John de Balliol was forced to abdicate by England’s King Edward I, who promptly declared himself ruler. 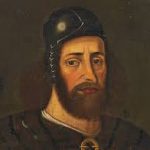 This, unsurprisingly, was not a popular move, and rebellion was to be expected. Wallace, a knight, burned the town of Lanark and killed its sheriff. He then gathered together some locals to attack English strongholds between the Tay and Forth rivers.

Wallace was one of the main leaders in the First War of Scottish Independence, and is remembered for defeating the English at the Battle of Stirling Bridge in 1297. He served as the Guardian of Scotland – a regent who governed the country – for almost a year; he was defeated at the Battle of Falkirk in 1298 and lost the position. Seven years later he was captured and given to Edward I, who executed him for high treason.