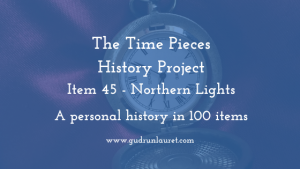 First time on the blog or new to the Time Pieces History Project? Find out what it’s all about here, and then come back to this page for today’s item – Philip Pullman’s Northern Lights. 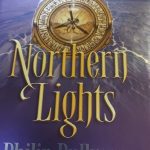 I can’t put into words how Philip Pullman’s work makes me feel. He’s the only author I’ve ever read that does that, and not being able to express those feelings is fairly strange for a writer! I don’t know if it’s the other worlds he so vividly conjures up, both familiar and different to ours, the characters, the plot… When I read a Philip Pullman book I want to rush to the end, but also read it forever.

Anyway, you get the idea. I highly recommend picking up one of his books if you haven’t already read them. Northern Lights is the first book of his I read, which must have been a year or so after it was published in 1995. My parents read it after me, and then we eagerly awaited the two follow-ups, The Subtle Knife and The Amber Spyglass. Last year, he published a prequel, La Belle Sauvage, the first in a new trilogy explaining more about the worlds he created for Northern Lights.

Philip Pullman doesn’t just write fantasy, though. The Sally Lockhart quartet is set very definitely in our London, and follows the titular character as she becomes a detective and solves crimes. Among his other books is The Good Man Jesus and The Scoundrel Christ, which presents an alternative version of the son of god. And while many of his books are ostensibly for children, he deals with adult themes and doesn’t sugar-coat the nasty bits, so you don’t notice how young the main characters are.

The Plot of Northern Lights

Lyra is an orphan, and has been brought up by the scholars of Jordan College, Oxford. Her education is patchy, and she’s happier in the company of Roger the Kitchen boy or the children around the college then learning or staying inside.

The Oxford Lyra inhabits is not the same as the Oxford in our world. Humans are accompanied by their daemons, which are animal manifestations of the soul. The daemons of children change shape, size and creature, but settle into one form during puberty. The city is modern in some ways, but more old-fashioned than the Oxford we know.

Lyra’s life looks like it will continue on the same path, but her natural nosiness gets the better of her when she sneaks 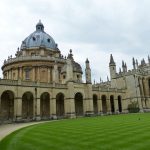 into a room she’s forbidden to enter, and sees the Master of the College slipping poison into a bottle of wine earmarked for her uncle, the famous explorer Lord Asriel. She warns him just as he’s about to drink from it, and he asks her to eavesdrop on the meeting he’s about to have with the scholars.

Lyra and her daemon, Pantalaimon, concealed inside a wardrobe, learn of the mysterious substance called Dust, which is causing much consternation amongst the various factions controlling the world. She also has to contend with the Gobblers, a mysterious group of people stealing children from the streets and doing something undefined but wicked to them.

Of course, not long after the story begins, Lyra leaves Jordan College, and finds herself on one adventure after another, each dangerous in its own way. She journeys through London to the far North, having several narrow escapes and surviving on her wits.

She travels in the company of the gyptians for a time; water-dwelling merchants who travel the length of the country. During that time, she learns to read the alethiometer, a compass-like object given to her by the Master. She meets witches, an aeronaut, Tartars, cliff-gasts and armoured bears, and makes loyal friends who’ll do anything to help her.

Although young and not always truthful, wild and reckless, Lyra is a likeable child. She has a good heart and a strong sense of right and wrong. As she battles through seemingly unsurmountable challenges, you root for her all the way through.

The History of the Compass

OK, the alethiometer isn’t actually a compass, although the American version of the book (and the film adaptation) is titled known as The Golden Compass, and the device is described as being a similar size and shape, so I’m including it here.

Compasses are usually magnetic, with a needle that rotates to line up with the Earth’s magnetic field and the ends point to the north and south. Early versions were made with the magnetised needle floating in a dish of water, attached to a piece of cork or wood. The needle would point to magnetic north as it settled.

We know that the history of magnetism dates back to before 600 BC, and that the Ancient Greeks had an understanding of its principles. They were the first to experiment with lodestone, which is a mineral magnetite made of iron oxide. The Greeks saw that it was able to attract iron and other pieces of mineral with the same composition.

The Chinese discovered around 2,000 years ago that rubbing an iron bar with a naturally occurring magnet, would magnetise the bar (or needle) temporarily so that it would point north and south. They would have used their compass for navigation, something that would have been needed from the 11th century onwards. 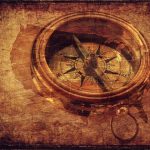 It’s probable that the navigational compass would have been used when there were no visible landmarks or the sun or stars to chart a course. Over time, improvements would make them much more reliable and a key piece of equipment.

William Gilbert investigated magnetism using scientific methods in the late 1500s, and discovered that the earth is a weak magnet. Further investigations into that were carried out by Carl Friedrich Gauss in the late 1700s and early 1800s.

At around the same time as Gilbert was carrying out his experiments, it was dawning on explorers that the Earth’s geographic north and that pointed to by a compass were not the same. The difference is known as variation, and readings need to be adjusted near the North and South Poles, where it can be significant, but not when near the Equator.

Lyra experiences the Northern Lights when she ventures to the frozen north to find and save her friend Roger the kitchen boy. Like those who see it in our world, she is captivated. The Northern Lights is on my must-do list, and the sooner the better.

The Northern Lights can be seen in Norway, Iceland, Lapland, Greenland, Canada, and the far west of Scotland. The light pollution needs to be at a minimum, which is why the more remote parts of Scotland are best, and the conditions need to be right – dark, clear skies usually occur between April and August.

Although early humans would have regarded the aurora borealis as something to be feared, they are really caused by electrically charged particles entering the upper atmosphere from space, travelling at high speed. The name comes from the Latin words ‘aurora’ – ‘goddess of the dawn’ and ‘borealis’ – ‘northern’. Borealis was also the Greek word for the north wind.

A small percentage of these particles get through the Earth’s field and head towards the magnetic Poles. When they 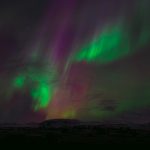 collide with molecules in our atmosphere, they create rings of emission, which glow in the sky. The decay of the particles back to their original state causes the lights we see.

In Iceland, because the sun doesn’t set during the summer, the Lights can’t be seen. The light pollution in Reykjavik can also render them invisible. The phenomenon also exists in the Southern hemisphere, where it’s known as the aurora australis.

There are all kinds of myths and legends about the aurora, and these vary from country to country. The British, Irish and French regard them as omen of disaster, while North American Innuits considered them to be a game played between their dead ancestors.Greenlanders went one step further, and believed they were actually the souls of dead children. In Finland, they put them down to water sprayed by a whale, while the rest of Scandinavia saw them as a sign of painless childbirth and good fishing hauls.

Cree Indians had a similar view to the Innuits, and thought the lights were ancestors dancing in the heavens; the brighter they were, the happier their ancestors. And the Chinese regarded them as a battle between two giant dragons representing good and evil.