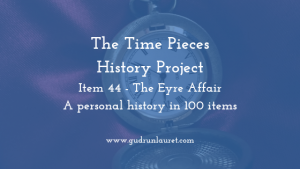 First time on the blog or new to the Time Pieces History Project? Find out what it’s all about here, and then come back to this page for today’s item – The Eyre Affair.

The Eyre Affair – Introduction to Item 44 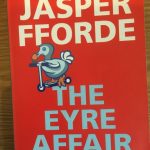 According to the dedication in the front of this book, it was a Christmas present in 2004, and my first introduction into the mind of Jasper Fforde. Some 15 years later, I’ve read pretty much everything he’s written, and even met him at an ‘audience with’ event at my local Waterstones.

While I found the later Thursday Next books to be a bit complicated (there were a lot of throwaway references to things that had happened in the intervening time between the books, which confused me), this one, the first in the series, is brilliant.

It’s full of all kinds of puns, silly names and objects you wouldn’t find in our world – more’s the pity – such as the Will-Speak, an automaton which recites Shakespeare for 10p. Plus, I like the idea of being a literary detective and poetry and prose being so valuable that people fight over it.

The Plot of The Eyre Affair

Thursday Next is a celebrated Crimean veteran (in this version of 1985, the war has been raging for over 100 years) and successful LiteraTec for SpecOps 27. She lives in London with her pet Dodo, Pickwick, feeling frustrated with her career and still holding a candle for her ex-fiancé, Landen Park-Laine.

When a hunt for the missing original manuscript of Martin Chuzzlewitt ends with Thursday being the only survivor of an encounter with her former college lecturer, the not-quite-human Acheron Hades, she retreats to her home town of Swindon to regroup.

However, a lot has changed in the intervening decade. Thursday’s SpecOps colleagues stake vampires, deal with 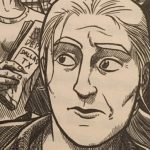 Picture from a later Thursday Next novel

complaints about the endings of books and try not to get caught up in squabbles amongst the John Miltons or the Shakespearians and the Marlovians.

Thursday and her partner, Bowden Cable look for Hades while trying to avoid the agents of Goliath, the formerly-benevolent corporation that now runs everything, and their boss, Braxton Hicks, who’s more concerned about his budget than his staff.

Thursday also has to contend with her feelings for Landen, her relationship with her father, a disgraced Chrono-Guard who pops in and out of time, often at the wrong moment, and rescue her aunt Polly from inside a Wordsworth poem. And work out if she really did jump into the middle of Jane Eyre when she was a little girl…

Frequent reference is made throughout the book to the conspiracy theory that Shakespeare is not really the writer of all the plays attributed to him. Thursday is firmly convinced that he’s the true author, and is happy to spar with those who give the credit to someone else.

So why do people think that Will didn’t write his works? He was, we assume, educated at a good local school – the Kings New School – and born into a comfortably well-off family – his father was an alderman and glover, and his maternal grandfather was a successful farmer. 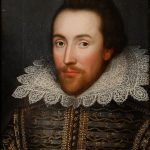 He married young, and some time after his 21st birthday, he was a part owner in a players’ company, as well as an actor and playwright. He died aged 52, in 1616, three years after he retired to Stratford.

Over two and a half decades, he penned 39 plays and 154 sonnets, as well as other bits and pieces. But very little is known about his private life, prompting author Mark Twain to declare: “So far as anybody actually knows and can prove, Shakespeare of Stratford-on-Avon never wrote a play in his life.”

Many detractors argue that he wasn’t as educated as we think, and was incapable of producing the sorts of writings good enough to be performed for royalty. The general conclusion is that Shakespeare was used as a cover for one or more contemporary writers who didn’t want to use their own name/s, either because they didn’t want to risk their position or perhaps because they were female.

The most famous of these supposed real authors is the playwright Christopher (Kit) Marlowe. His most fervent supporters are known as Marlovians, and in Thursday’s world can be quite aggressive. We know that he was stabbed to death in a barroom fight, but Marlovians will argue that this was a cover-up to save him from imprisonment for being an atheist.

Other possible candidates include Sir Francis Bacon, because some similarities have been noted between his plays and that of Shakespeare. The 17th Earl of Oxford, Edward de Vere, has also been put forward because there are, apparently, clues in the plays that refer to parts of his life. Rhys Ifans portrayed the Earl in the surprisingly enjoyable 2011 film Anonymous, which added to this idea.

Another favourite is the 6th Earl of Derby, who also had a theatre company and shared initials with the Bard – his 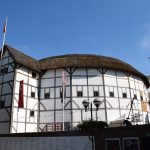 name was William Stanley. In all, around 80 names have been suggested as the true author. It’s argued that he was actually illiterate, as his parents and both his daughters used a cross or other mark in place of a signature.

The main reason seems to stem from snobbery, actually, with critics claiming Shakespeare couldn’t possibly have had knowledge of court intrigues, international politics and aristocratic pastimes or interests. The idea that he wasn’t the real writer was first put about in the mid-1800s, when the idea that he was the greatest playwright to have ever lived.

Perhaps it’s just sour grapes, although theorists have amassed plenty of ‘evidence’ to support their belief, including the rather bonkers notion that records revealing the truth have been destroyed to protect the real author, and others have been falsified to give more credence to it being Shakespeare.

In the world Fforde has created, airships are still a mode of transport, and a popular one at that. Also known as a dirigible, or a zeppelin (named after their manufacturer), they work on the principle that they power themselves through a lifting gas that isn’t as dense as the air they’re floating through. A hot air balloon is also a type of dirigible.

Early versions were basic hydrogen balloons, such as the one used to cross the English Channel in 1785. Inventors Jean-Pierre Blanchard and John Jeffries narrowly avoided an accident on their maiden voyage, so ditched as much as they possibly could overboard (over the side?) including, somewhat improbably, their trousers. 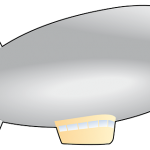 Later attempts were more successful, with Henri Giffard cruising at 6 mph in a steam-powered airship he could actually steer (in 1852). In 1895, Count Ferdinand von Zeppelin submitted his patent for a balloon gas cells within a framework to power a rigid ship.

The modern version of his company still makes semi-rigid airships in Germany today. Goodyear’s helium blimps emerged in 1925, but the future of luxury airship travel was cut short with the tragic destruction of The Hindenburg, which caught fire as it landed in 1937, killing 36 people.

At the end of The Eyre Affair we’re introduced to Bartholomew Stiggins, a Neanderthal who works within Spec-Ops. He appears as a character in later books, a softly-spoken pre-modern man who just wants to do his job ewll and eat bugs.

Neanderthals died out 40,000 years ago, but their remains can tell us a lot about evolution. The famous Ötzi, found in The Alps in 1991 by German tourists, is considerably younger – he’s believed to have died about 5,000 years ago – but is an equally interesting discovery.

Aged about 45 at the time of his death and measuring about 5 feet 3 inches, Ötzi, is the oldest example of a person from the Copper Age (Chalcolithic period). Although cause of death was a blow to the head, he also had a fresh arrow wound to his shoulder.

He was fairly unhealthy, though, so any number of ailments might have finished him off if he hadn’t been clonked on 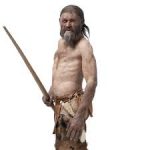 the head as part of a ritual sacrifice. He had Lyme disease, gallstones, hardened arteries, parasitic worm eggs in his gut, and arsenic in his blood (from the copper).

Ötzi was found to have 61 tattoos, black lines of differing lengths and thicknesses. Made from some kind of ash, they were found to correspond to places where the body showed signs of wear and tear, suggesting that it was a form of pain relief similar to acupuncture. This would predate the introduction of the treatment in China, which is thought to be 1,000 BC. Incredibly, DNA testing revealed that Ötzi has 19 living descendants, scattered around the Austrian Tyrol.

The Telegraph: Shakespeare: The Conspiracy Theories
Popular Mechanics: A Brief History of the Airship
National Geographic: Surprising Facts About Otzi the Iceman