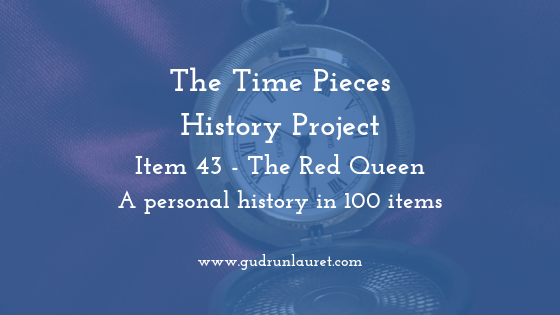 First time on the blog or new to the Time Pieces History Project? Find out what it’s all about here, and then come back to this page for today’s item – Margaret Drabble’s The Red Queen.

The Red Queen – Introduction to Item 43 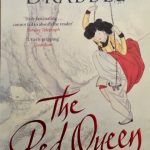 I first came across Margaret Drabble about a decade ago, while I was browsing in the Oxfam Bookshop. I bought A Summer Birdcage, one of her early books, and enjoyed it so much I started hunting down her others. I’ve got quite a big collection, now, although there’s still a couple I’m missing.

Drabble writes about real women and the challenges they face, and her characters age as she does. But that doesn’t mean the more recent ones are about old ladies collecting pensions; her women are much more interesting and nuanced than that.

I’d guess that a lot of her work is influenced or inspired by her own life, such as her first marriage to a theatre actor – The Garrick Year seems to authentically describe what that world was like in the 1960s. Each heroine is so lovingly created that you’re quickly caught up in their world and find yourself rooting for them to succeed in whatever it is they’re trying to achieve.

The Plot of The Red Queen

The Red Queen is very different from Drabble’s other books. For one thing, there are no chapters, with the book simply split into ancient times and modern times. For another, while there are two lead characters, they exist in separate eras, and never meet. The first part of the novel is based on a true story, and Drabble herself says she was so drawn to it that she wanted to dramatise it.

In the first section, we are in South Korea in the 1700s, a time where life is quite structured, with expected behaviours for men and women, the upper and lower classes. We meet Lady Hyegyeong, who comes from an educated family. Her parents put her forward to be the wife of the Prince Regent, Sado, although they don’t really expect her to be chosen.

Hyegyeong wins over the king and queen, and she and Sado are married at the age of 10, although consummation 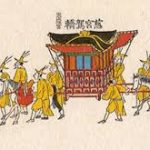 happens when they’re 15. Palace life is stifling for both of them, with strict rules about where they go, formal dress codes rigorously applied, and a whole host of customs to be followed without question.

King Yongjo has two wives, a stepmother and numerous daughters, all of whom have different opinions on how Sado should behave. The young couple also experience a period of loss, when they lose their first son and a sister, grandmother and stepmother (of Sado’s).

These tragedies, coupled with Sado’s father’s cruel treatment of his son, including frequent, public humiliation, and an overindulged nature, soon manifest themselves in manias in the prince. Lady Hyegyeong watches in horror as her husband’s mental health deteriorates – he discards 20 or 30 outfits for state events, and slashes his clothes with his sword. He also finds release (and probably sexual gratification) from murder, and kills servants, eunuchs and even his consort.

Lady Hyegyeong does her best to protect him, but Sado’s behaviour escalates, and much of it manifests in public (he brings the severed head of his first victim to show his wife and her ladies in waiting). Finally, the king and queen realise the depths their son has sunk to, and are forced to intervene to protect the dynasty. 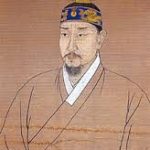 In the second part of the book, we meet Dr. Babs Halliwell, who is effectively a stand-in for Margaret Drabble. Like the author, she has come across Lady Hyegyeong’s memoirs, and finds herself captivated by the eloquence of a woman who survived such traumas.

Dr. Halliwell is in Korea to attend a conference and deliver a paper, but she’s also keen to visit the places Lady Hyegyeong talks about. But Babs finds Korea strange, and is preoccupied with thoughts of her life back home, and people from her past. Nevertheless, Babs finds time to see Lady Hyegyeong’s palace, to deliver her paper and have a brief but intense fling with another delegate before she has to return to Oxford.

There is very little dialogue, and the second half of the book is written in the third person but as if we’re spying on Babs while she’s on her trip. This adds to the sense of unreality, as Babs finds herself in a country so different to her own and outside of her usual routine.

Lady Hyegyeong was a real person, although she was never actually a queen as Prince Sado didn’t succeed the throne before his death. She wrote four versions of her memoirs, describing her life before, during and after her marriage.

Her father was a scholar, and her aunt taught her to read. It was her father who put her name forward to be considered as a potential bride for the young Prince Sado when she was nine. Although her first son died, her second son thrived, and eventually became king. She also had two daughters.

Lady Hyegyeong documents her husband’s illness and declining health in her memoirs, showing surprising insight and sympathy for a woman of her time and status. She details Prince Sado’s fear of thunder and how encountering his father renders him speechless.

For a long time, the princess helps her husband to manage and hide his illness, buying material so he can have 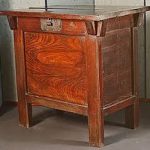 multiple sets of clothes made to try on and destroy. Eventually, when he starts assaulting and raping the ladies-in-waiting, Heyegyeong goes to her mother in law.

By 1762, when the couple are aged 27, the family can do nothing more for Sado, and King Yongjo summons him for a trial. Demoted to a commoner, the king can then authorise the death of his son. Sado both pleads for his life and attempts to commit suicide, but in the end he is sentenced to be placed in a rice chest until he dies, which happens after eight days of suffering.

Drabble makes a reference to kisaeng in the first part of the novel, who are described as entertainers rather than prostitutes, chosen to entertain royalty and the nobility. They first came to prominence in the Goreyo dynasty, which began in 918 and lasted until 1392. The word ‘Korea’ comes from an alternative name for the dynasty – Koryo – which was first used in the 5th century.

Goryeo marks the unification of the Later Three Kingdoms and the introduction of a ruling class from the north. The Korean Peninsula had been under the rule of the Later Silla Kingdom, but internal disruptions caused its downfall 200 years later.

During Goreyo, Buddhism flourished, with 70 temples in the capital in the 11th century. Merchants came from the middle east to trade with the country, too, increasing its prosperity.  In this world, kisaeng women worked for the government, providing needlework services and medical care, as well as providing entertainment. They were trained in poetry and the arts, becoming skilled in many things. Training began at the age of eight, they began working at 15 and retired by their 22nd birthdays.

Kisaeng were classed as slaves, and came from the lower caste of society (the cheonmin). Thus, any female child born 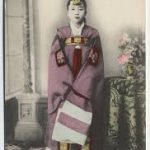 to a kisaeng could also become one. Sometimes parents sold girls to a kisaeng house if they couldn’t afford to care for them, and very occasionally a woman could become one if she breached a social rule which controlled the upper class.

In the Joseon dynasty era, the government introduced strict laws around how kisaeng worked, and while entertainment tasks stopped at age 30 at the latest, they could continue with other roles until aged 50, when they had to retire altogether.

A three-tier system, which restricted kisaeng to certain jobs depending on where they sat within it, was introduced at this time and lasted until the 19th century. The women were responsible for covering all of their costs, including food and clothing, so very few of them were wealthy.