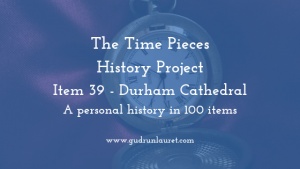 First time on the blog or new to the Time Pieces History Project? Find out what it’s all about here, and then come back to this page for today’s item – Durham Cathedral.

From a young age, my family and I would visit Durham to walk along the river and have coffee at Vennel’s. It was a short drive from my Nana’s house, so it made sense to call in and collect her on the way.

The walk always included running through the sandstone ‘Greek temple’ on the riverbank, playing among the carved trees, and if I could persuade my parents, into the Museum of Archaeology. The Cathedral loomed over us, and we’d go up and look at it, carefully avoiding 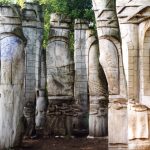 the manicured grass outside, which we were forbidden to walk on.

In case you’re wondering, the trees depicted the Last Supper, and you could only see the full image if you sat in a specially carved and positioned seat. Sculptor Colin Wllbourn created it with 13 diseased elm trees, and had to destroy it in 2001 when the trees finally rotted. I didn’t know that’s what they were, I just liked looking at them!

The History of Durham Cathedral

The Cathedral is built in the Norman style, and work on it began in 1093, not long after the death of William the Conqueror. However, the site had been significant long before that. The story goes that during the Viking raids, 9th century monks on Lindisfarne were concerned for the safety of the relics of St Cuthbert, who’d lived on the island two centuries before. Packing his coffin on a cart, they set off to find somewhere safe. 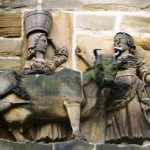 They trundled around until the coffin got too heavy to carry. The legend says that the cow pulling the cart finally had enough and refused to go any further, stopping where the Cathedral stands now. The monks took it as a sign that Cuthbert was happy to laid to rest here, and built a shrine. Cuthbert is still under Durham Cathedral, and the stone which covers his grave can now be seen by visitors.

Built of stone, the Cathedral is the oldest surviving building with a vaulted ceiling on a massive scale. It is also significant because it was the first building constructed in stone rather than wood since the Roman times, and because the Norman architecture has survived remarkably well.

One interesting feature of Durham Cathedral is the door knocker, which looks like it could be a lion’s head. The Cathedral was one of a number of religious buildings which offered sanctuary during the Middle Ages. The concept of sanctuary actually dates back to the Greeks and Romans, where it could be claimed not only at churches but at altars and even sacred groves. It was made into Roman imperial law in the 4th century.

Between the 4th and 17th century, any sacred place would keep people safe from arrest, with the notion that once you 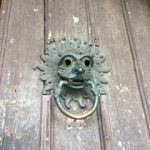 got to the door (and grasped the knocker) you could claim sanctuary. In fact, sanctuary can still be claimed today, although it is no longer legally recognised.

Those claiming sanctuary were not always criminals – sometimes they were slaves who had run away from cruel masters, or even those in a lot of debt. During the War of the Roses, political sanctuary was often claimed by those whose side had lost the most recent battle.

Elizabeth Woodville, whose husband Edward IV died in 1483, was so unpopular that she was forced to seek sanctuary at Westminster Abbey. For her, it was better than it sounds, as she and her six children lived in comfort and style.

Once sanctuary was claimed, those chasing the wrongdoer could not enter the building to remove them by force, and nor could the claimant try to fight them off. While they might sometimes negotiate a compromise, the person inside the church usually had to go into exile. In 12th century England, you could claim sanctuary for 40 days, and then by law you were exiled for life. Elsewhere in Europe, there was no time limit on your safety.

When you drive into Durham, the city marker sign welcomes you to ‘the land of the prince bishops’, a curious title which has long puzzled me. What is a ‘prince bishop’ and why in Durham?

We learn that for centuries, the county was effectively an independent state and ruled by prince bishops rather than the king. In Anglo-Saxon times, Durham was part of the Kingdom of Northumbria, which stretched from the River Forth to the Humber. This was almost a third of the country, and the Kingdom was extremely powerful.

The combination of the stubborn Northumbrian kings, who sat at Bamburgh, and the influential bishops like Cuthbert and Aidan (who we know had the support of those kings) meant that after the Conquest, William had a hard time getting them to cede power. They knew they were in a key location for the Normans, and could protect the rest of England from the Scottish. 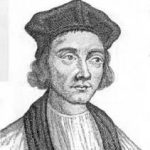 William’s first idea was to send an earl to govern this far-flung spot on his behalf. When this failed – twice – he gave in and made the Bishop of Durham a Prince-Bishop. From 1075 onwards, whoever held that role could raise taxes and an army, and mint his own coins. In exchange, he was loyal to the king and defended the border.

Interestingly, the bishops were not necessarily local – the first two Prince-Bishops were Norman. Ranulf Flambard (whose name probably referred to his fiery personality) was the second holder of the job and is famous for frequently filling the royal coffers, being the first person to escape from the Tower of London, and overseeing the construction of Durham Cathedral.

As it turns out, that Greek temple is a summer house dating to around 1810, and is known as the Count’s House because it was mistaken for a house occupied by a Polish dwarf called ‘Count’ Boruwlaski. This seems somewhat ridiculous, because it would be far too small for anyone to live in.

Boruwlaski was born in Poland in 1739, one of six children, and while the family were impoverished gentry, he wasn’t actually a count. Two of his siblings were also small, although a brother reached 6 feet four and served in the army.

A friend of his mother’s, the Starostin de Caorlix (it’s unclear what her title means, although in his memoirs Boruwlaski refers to her as ‘Lady’), took him in, and when she married passed him on to Countess Humiecka. He travelled all over Europe with her, and was even presented to the Empress Maria Theresa (mother of Marie Antoinette).

After that, he went to visit the ex-king of Poland and earned the envy of the court dwarf, who tried to throw him in 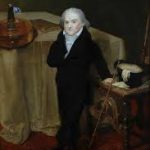 the fire. He then fell in love with one of the countess’ companions, and, with the support of the king, whose protection he’d won, married her.

The couple went on a tour of Europe. In Vienna, the British ambassador invited him to England, where he met the Royal Family. Before departing for England Boruwlaski and his wife and child toured Germany and Turkey. An accomplished guitarist and violinist, he supported his family through performing.

He had several successful tours of Britain and Ireland, although sometimes was so short of money that he had to go ‘on display’ and have people pay to look at him. He was invited to retire in Durham by the organist at the Cathedral, Thomas Ebdon, which he did until his death in 1837 at the age of 97. The temple is most likely a folly and would have been within Boruwlaski’s cottage grounds.