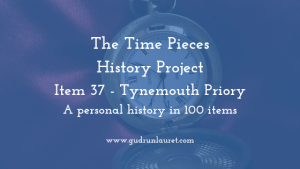 First time on the blog or new to the Time Pieces History Project? Find out what it’s all about here, and then come back to this page for today’s item – Tynemouth Priory. 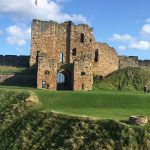 Other than walking along the beach, Tynemouth was not somewhere we visited very often, although I do remember a couple of outings with my Grandma when I was very young. As a teenager, I used to visit Razzberry Bazaar with a hippy friend from school, and trawl the racks for velvet jackets and floaty skirts (although more for her than for me!)

In recent years, the village centre has seen a resurgence, and there are now a lot of restaurants and cool wine bars alongside the traditional pubs, as well as places to get fresh fish and chips. It’s always busy at weekends, and during the summer there are food and music festivals held both in the grounds of the Priory and outside.

The History of Tynemouth Priory

Strictly speaking, what you visit is Tynemouth Castle, which was built around the foundations of an earlier monastery. It’s thought that the area was lived in during prehistoric times, although the earliest known settlement, belonging to the Votadini tribe, dates to the Iron Age (800 BC to AD 43). The Romans, as we know, had quickly spotted the potential of the River Tyne, and it was used to supply goods to the forts on either side. 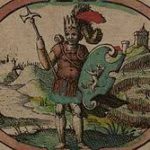 The monastery was founded in the 6th or 7th century, and would have been significant, along with those further up in Northumberland, such as those at Holy Island and Jarrow. King Osred II of Northumbria was buried at a church that stood on the present site in 792 AD. However, the Viking raids that attacked the other religious buildings in the county also came to Tynemouth, and it was easy for them to access it. The building was abandoned in 785 AD.

The site was occupied a couple of times after that, and then William II gave the land to one Robert de Mowbray in 1090, making him Earl of Northumberland and encouraging him to be loyal to the crown. Robert gave the land to the Benedictine Monks, and they built themselves a priory.

During the First War of Scottish Independence (1296-1328), the Priory was enclosed in walls, with towers for men to keep watch in case of invaders. In the 1300s, a garrison was installed, and the fortifications strengthened later in the century.

When Henry VIII declared his supremacy over the Pope and made himself head of the Church of England, he had the Priory seized and handed it over to have its defences improved even further. From then on, the site was a defensive rather than a religious one, and played an important part in both the Civil War and later, in defending the coast.

So who were the Benedictines, invited to Tynemouth by Robert? The Order of Saint Benedict includes both monks and nuns, and was founded in Italy in 529. Benedict established a number of monasteries, although it was probably not his intention to start an order, and to this day they are an order in name only.

They arrived in England in 597, making the British order one of the oldest. Each community takes responsibility for 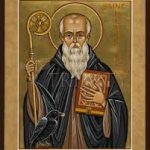 themselves, although there is a Confederation to support the 19 orders’ shared interests, which was established in 1893. The black habits they wear has led to the nickname of the Black Monks.

Community is at the heart of each order, and members are expected to remain in the same one for life. They obey set hours of silence, and ‘holy reading’ is key. This led to the creation of monastic libraries, where the monks could go to complete this task. The first known library is in Canterbury, which is also where the Benedictines first settled.

Some orders are separated from the local community, but others play a bigger part, such as running schools. The Benedictines have produced a number of popes, and members have been martyred or canonised. They have also been writers, scholars and reformers.

The order of Buckfastleigh in Devon is also famous (or possibly infamous) for the production of Buckfast Tonic Wine. An abbey has been in the town since 1018, with the present structure built in 1134.

It is 15% proof and in the UK is red wine-based, with large amounts of caffeine for good measure (pun intended). The monks first made it in the 1890s, and recommended “three small glasses a day, for good health and lively blood.” It has a reputation in modern times, particularly in Scotland, for being a cause of crime.

Buckfast accounts for only a small percentage of total alcohol sales, although a lot of it is consumed in Lanarkshire, for reasons unknown. It removes self-control and feelings of inhibition, which may be the cause of criminal acts. However, the manufacturers have strongly refuted that claim.

Tynemouth is also well-known for its weekend market, which takes place every week inside the metro station. It’s worth a visit to browse the stalls – there are all kinds of things on offer, from handmade greeting cards, toys, books and a wide selection of sweet and savoury foods.

You should also go to admire the architecture. Tynemouth is one of three Victorian stations on the coastal line which 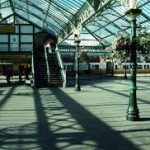 used by Nexus Metro but originally built for trains. It’s a Grade II listed building, designed for the North Eastern Railway Company by William Bell and opened in 1882.

The station has vaulted glass roofs, wrought-iron railings and a beautiful footbridge which takes you from one platform to another. The bridge is glass-walled, so you can look down on the tracks and the market, and there is often a display of art or historic photos in the central section, and while this is not accessible to the public, you can see the exhibits as you cross.