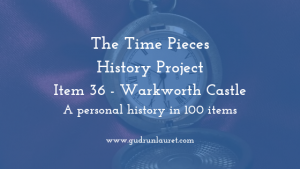 First time on the blog or new to the Time Pieces History Project? Find out what it’s all about here, and then come back to this page for today’s item – Warkworth Castle. 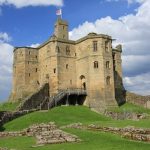 Yet another place in Northumberland we visited regularly as children – scrambling up and down the moat and poking each other through the arrow slits. The village of Warkworth is tiny, and the castle dominates the skyline. It’s another great example of why the north east was such an important place in terms of defending the country.

I also have a particular soft spot for it because it was the subject of my GCSE coursework back in (ahem!) 1996. We were so keen to get good marks that two of my friends and I trekked up one Saturday afternoon to have a look around and make some notes. It must have paid off, because I’m fairly sure I got an A for my history coursework…

The History of Warkworth Castle

The English Heritage website tells us that the castle was laid out in around 1200, although there was probably a settlement there before the Norman Conquest. The first stone building and the motte and bailey were erected by the Earl of Northumberland (and son of King David I of Scotland) in 1139.

Henry II repossessed Northumberland in 1157, and the castle may have been built as part of that takeover. A charter mapping properties between 1157 and 1164 shows that the king gave the castle to Roger fitz Eustace, and his son Robert built the castle we see today, between 1199 and 1214. By the end of the century, Warkworth was a key location in the battle between Scotland and England, and indeed it was besieged in 1327.

In 1332, Edward III gave the castle to Henry Percy, the 2nd Lord Percy. They were Earls of Northumberland, powerful, often in favour with the king or queen, and owned much of the land in the area. Alnwick Castle was their ancestral seat, but they chose to live at Warkworth until the 17th century.

The Percys are an ancient family, and are believed to be the descendants of Manfred, a Danish chieftain who supported Rolf the Ganger (also Gaange Rolf or Rollo – “The Walker”) to conquer Normandy in 912. His grandson, William, was born in around 1030, and is regarded as the founder of the family. 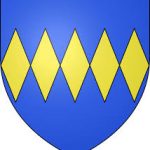 England just after the Battle of Hastings. Apparently, he sported whiskers which earned him the nickname ‘Al Gernons’, a name later Percys adopted.

William’s popularity with the new Norman king saw him given lands across huge parts of the country, including Nottinghamshire, Lincolnshire and Yorkshire, and he was made a baronet. He fought and died in the Crusades, and his heart was buried at Whitby Abbey (his brother was the abbot).

His great-granddaughter Agnes married the half-brother of the second wife of Henry I (!) and her descendants took the name Percy. The family continued to be favoured by royalty, and it was the success of Henry de Percy in the late 13th century which led to the move from Yorkshire to Northumberland.

To make things confusing, many of the elder Percy sons were named Henry, and most of them made their mark on history. Not long after one was made Earl of Northumberland by Richard II (1377), he swapped sides in favour of the king’s cousin, the future Henry IV. Arguably the most famous of these Henrys was Harry Hotspur, who was rebelling against Henry IV and died in 1403 at the battle of Shrewsbury. 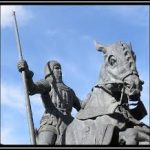 Harry Hotspur was a respected general and was often sent on diplomatic missions, including representing the Duke of Aquitaine, John of Gaunt. The nickname comes from ‘Haatspore’, because the Scots saw how keen he was to attack their borders, and how quickly he did so.

The Percys supported Kings Henry V and VI, and the 3rd Earl of Northumberland was killed during the Wars of the Roses. The 5th Earl, Henry Algernon, was brought up in the court of Henry VII, and was betrothed to Anne Boleyn.

His father refused to allow the marriage, and many years later, when Anne was on trial, she used their promise as an attempt to get out of trouble. Hotspur’s descendents continued to support the royal family, although they swapped sides now and then. The Percy family still live at Alnwick Castle today.

Warkworth Castle is famous for being a fine example of a motte and bailey, but what does that mean, and what are the benefits of building a fortress in that way? The ‘motte’ part is the mound, from the Old French ‘mote’, which became the word we use now.

The making of the hump requires earth to be dug out of the ground, creating a ‘moat’ or ditch. These don’t always have to be filled with water, and the one at Warkworth was never used in that way. The ‘bailey’ is the outer enclosure, which acted as a defence for whatever structure was atop the motte. These could also have ditches round them, and at the very least they would be fenced all the way round.

Motte and bailey structures were built in the 11th and 12th centuries, and in the beginning they would have had a 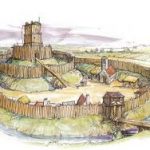 smallish wooden tower as the focus. Over time, and when bigger mottes were created, larger castles of stone could be built. They were designed to house the lord and lady of the area, their family and household servants.

The bailey would be home to more servants, the stables and all manner of other buildings, including a chapel, warehouses and barracks. Those within the bailey would act as lookouts to protect the family in the castle and the wider community in case of invasion.

The motte and bailey design was used widely throughout Ireland, Britain and Europe, and was particularly favoured by the Normans, who found them ideal defensive structures during the time of the Conquest. They were cheap and quick to put up, so they could be constructed while marching across the country, and could be manned by a member of the nobility who had taken William’s side. However, by the 13th century they had been replaced by more practical, long-lasting structures.

Henry II is sometimes an overlooked monarch, because the people and events around him were so significant. He was the great-grandson of William the Conqueror, son of Queen Matilda, father of King John and Richard the Lionheart, and husband of Eleanor of Aquitaine, who was a fascinating person in her own right.

Eleanor became Duchess of Aquitaine after the death of her father, serving as its ruler. She was patron to a number of literary figures, an army leader several times over, and the ex-wife of Louis VII. Her mother in law, Matilda, was the daughter of Henry I, and should have been ruler after him. Her cousin, Stephen of Blois, thought he should have got the job instead, sparking a civil war that lasted almost two decades. 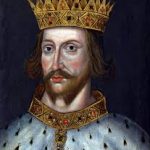 So, Henry II had a lot to live up to, and as the founder of the Plantagenet dynasty, he did quite well. His marriage to Eleanor meant that he actually owned more French land than the king himself, and on attaining the throne in 1154, at the age of 21, set about making a name for himself.

A strong and successful ruler, Henry nevertheless faced challenges during his reign, including an ongoing dispute with Thomas Beckett, which as we know led to the latter’s murder. Henry also faced problems with his three sons, partly as they argued over who had the most property.

Just three years after his coronation, Henry decided that the Scots, who were given control of Northumbria in 1139, had had it long enough. He reclaimed it for the English side, and it’s thought that Warkworth was built in its strategic position to protect the county from border raiders.